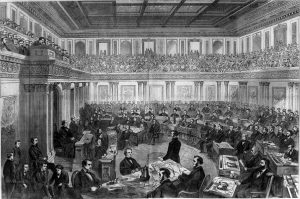 Forget the Senate trial for a moment. This is not the space to discuss that, anyway. What about the word itself?

It came first to my attention in 1974, when Richard Nixon got impeached in the House of Representatives but resigned before the trial in the Senate.  I kept thinking of the fruit from a peach tree, and that bears no relation to our word. As a verb, “impeach” has a history reaching back to Middle English and Old French, as in this 14th Century usage cited by The OED: “He schal dwelle þere alle his lif, and no man enpeche hym” or “he shall dwell here all his life, and no man impeach him.” A noun form appears in written records about 200 years later.

Originally, the verb could mean “to hinder” or other synonyms. That would be the case for The OED example just now. Verbs signifying “the action of impeachment” gradually narrowed to two meanings still current. One we are using this week means to bring formal charges for an “act of treason or other high crime or misdemeanor” or “to find fault.” A second usage still crops up when we say someone’s conduct or action remains “unimpeachable” or beyond suspicion.

We have other “im-” prefix words in English: “imbibe” and “imply” spring to mind. A quick peek at the OED entries revealed that they share the Medieval roots of our Word of the Week as well as a transition from  -en and -em prefixes to the modern spelling.

Such elder usages and meanings vanish from human memory over time. Other memories do not fade so easily.  I recall well exactly where I was when President Nixon announced his resignation on national television.  A short period of healing followed, too short a time.

To provide a sense of the history of the process for political leaders, the reader may wish to consult a comprehensive history of impeachments, globally, at Wikipedia. Our image comes from their page about President Andrew Johnson’s Senate trial.

2 thoughts on “Word of the Week! Impeach”