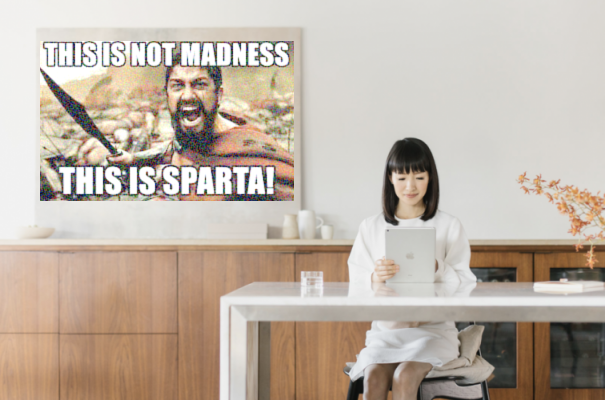 Let’s continue the Peloponnesian fun with another word from Ancient Greece, in fact, from Laconia that gave us last week’s “laconic.”

Sparta was, of course, one of the most powerful Greek city-states. Yet why did a friend describe a minimalist’s house as “Spartan”? How did the virtues espoused by Marie Kondo align with those of King Leonidas?

It’s clearly a metaphor associated with “not having a lot of stuff / bare bones /  austere / reduced to essentials.” A look at the culture of ancient Sparta yields a lot of good information on Spartan values: hierarchy, simplicity, a militant orderliness for all things. The OED dates this sense of the adjective to the 19th Century, for frugality or brevity (as in a laconic reply).

Since this is still Sparta at our blog, or at least a pretense of it, I’ll end there. 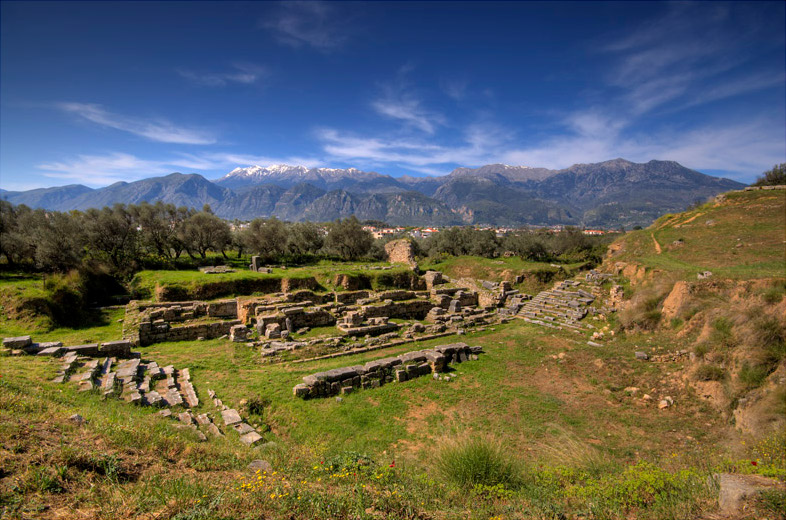 I would like to be more laconic in my replies. It’s a gift. The art of the terse, but meaningful, statement can be lost on academics. We professors write, as one student in my class today put it, by “spewing ideas.”

Can a critical idea be expressed in a few words? I think so. That’s the art of a laconic statement.

The term’s origin is Greek, referring to Laconia, the region where the ancient city of Sparta can be found. The term “spartan” has come to mean minimalist. Think of a laconic statement that way.

I’ve read several about historical instances of a laconic reply, but none work better than what the Spartans said to Philip of Macedonia, father of Alexander The Great. During his campaign to unite Greece, he warned Sparta that “You are advised to submit without further delay, for if I bring my army into your land, I will destroy your farms, slay your people, and raze your city.”

The official reply of the Spartan government? “If.”

Millennia later, General McAuliffe of the US 101st Airborne, surrounded by the German Army at Bastogne, replied “Nuts!” to the demand that he surrender. Truly a Spartan, in spirit.

We can find laconic statements far from the battlefield. Here I’m thinking of how we understate a real problem, even a disaster, by calling it an “issue.”  A relative of few words once quipped about a tightwad’s unwillingness, “that would require spending money.”

Succinct, understated, direct: do you ever express yourself that way? 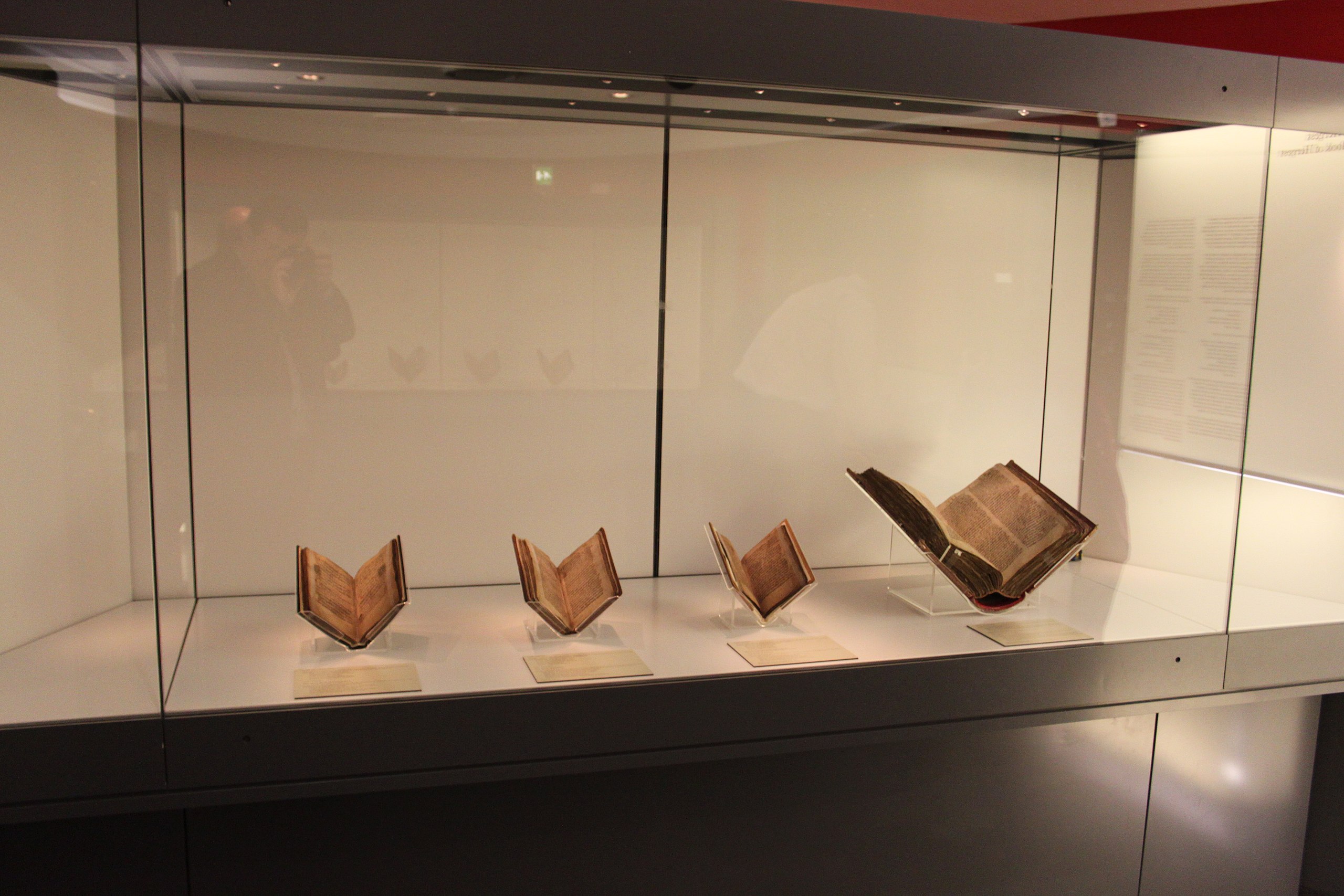 No, I’ve not misspelled “philosophy.” That word’s lesser-employed cousin means, at its Greek roots, a lover of words.  If you are reading this, you must at least have a crush on words.

As with last year’s post, for the day commemorating Dr. Martin Luther King, I wanted a word that would describe him. In addition to his other gifts and accomplishments, King’s writing demonstrate his love of words and metaphor. He was certainly a non-academic philologist. So when did philology, as a word, originate? Why has its usage tapered off today?

The OED gives us Chaucer’s example from the 14th Century, then more early 16th Century examples for earliest uses; as with so many other words at this blog, blame Gutenberg for that. I suspect that the study of language, and the sharing of ideas about it, spread with the spread of printing.

Usage ranks a surprising four of eight on the OED’s scale. That means our word is not common but also not unguessable for English speakers. It ranks alongside one of my favorite words, schismatic, yet I imagine that more academic ears would recognize our term than the one just given. Outside of Academia, both would sound alien.

Even within my circle of scholarship–writing centers and writing classrooms–no one has ever called a colleague a “philologist.” Why then has this term fallen from favor in learned circles? Most faculty I know have a curiosity about language, whatever academic discipline they practice. One supposition I see, in a casual Google search, involves snobbishness and worse, bigotry, an early generation of scholars who served as gatekeepers for “proper” written English. Those same grandees might be horrified by the OED’s inclusion of another of my favored words, “badass.”

To learn more about the modern debate about the history of philology and what constitutes philology today, read James Turner’s book from Princeton University Press (I plan to) and Mark Liberman’s post about how it fell from grace as a formal academic pursuit. Liberman posits a new definition that I both like but find limited, “the discipline of making sense of texts.”

Can we broaden that to spoken language? More than ever, we could use an inclusive form of philology to get students and those outside our campuses to be curious about, even come to love, the play of words. Poetry slams are a start. Studying speeches by King and other gifted writers would be another branch of modern philology.

I’d welcome any other speculations about the waning of philology, as word or practice, in comments. While you speculate, please send us words and metaphors useful in academic writing by e-mailing me (jessid -at- richmond -dot- edu) or leaving a comment below.

Image of ancient books of Wales courtesy of Wikipedia. 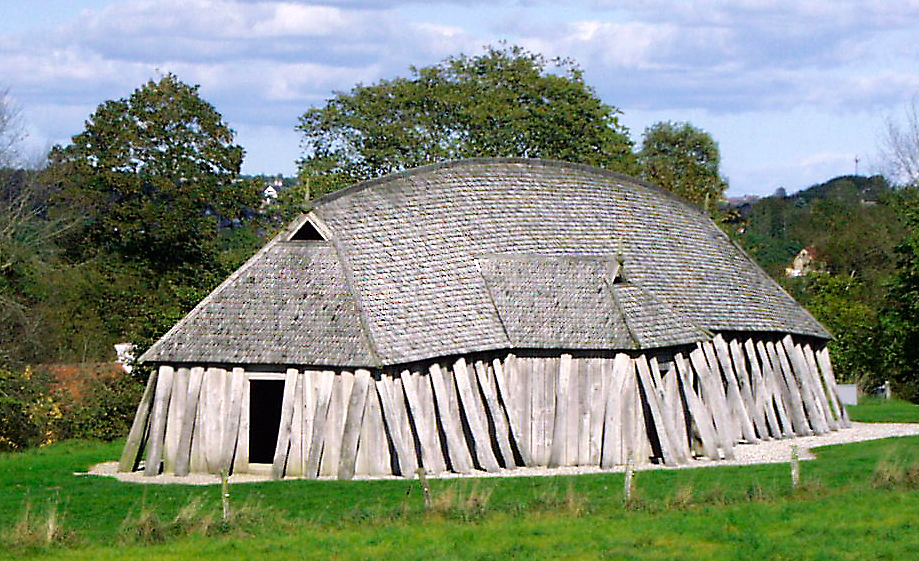 Ah, homonyms in a time when we are once again becoming an oral culture. Too many of my students neither read enough seriously nor read with care when they are required to do so. Hence, the repeated docking of 10 points (they can get them back) for confusing “whether” and “weather.”

As in Dylan’s song, “you don’t need a weatherman to know which way the wind blows.” It’s blowing an ill wind, for nuance in the language. I think. If so, I cannot stop it with my 10 measly points.  But what if these winds blew before? And will blow again? Hence my Mead Hall photo. We are going back to the time of Beowulf, fen-stalking Grendel the monster, and the warlike but helpless Geats that the monster preyed upon.

As we’ll see, there were once two distinct terms in play that now sound exactly alike. So where did our words come from and where diverge? Let’s dip again into Henry Bradley’s The Making of English, (a steal for your Kindle at 99 cents, the one sort of book I like to read on a screen). The philologist notes, in his chapter on changes of meaning, that “[m]ost of the distinctions that exist in spelling and not in pronunciation are between words that are historically different, and when this is so the various spelling usually represent obsolete varieties of pronunciation.”

“Whether” is one of the oldest English words I’ve featured. The OED dates an obsolete adverbial form back to the time of Beowulf, with the Old English term hwæþ(e)re. Leaving that term in the Mead Hall with the brooding Geats, let’s move forward in time a bit, to look over, in your own sweet time, (spelled many different ways) the multiple ways in which “whether” got employed down the centuries. It’s almost maddening to follow the many twists and turns this one ancient word took, until we get to 1819,  with Poet Percy Shelley wondering in a letter, “I am exceedingly interested in the question of whether this attempt of mine will succeed or no.”

So am I. Can I teach Gen Z why the words are not interchangeable in writing? Or is it as doomed as Beowulf’s last battle with a dragon? Let’s not go there. What about the weather? Here we have another ancient word, this time from German, rendered in Old English as weder. I suppose when Grendel ventured out into the fens to maim, mangle, and eat Geat, he did his best work in foul weather, and he was able to distinguish the pronunciation of the two terms. The OED notes morphing in how the word got spelled, but like whether, weather (the word, if not the phenomena) settled down by the 19th Century.

What will happen next, round the colossal wreck of whether and weather? I’m no weatherman. I don’t know. Our modern forms of communication lend themselves to encouraging more simplification. Maybe we’ll use one spelling such as “wether” in a century, and listeners will then, as now, know which way the linguistic wind should blow. I and my 10-point penalty will be long gone, either way.

Mead hall image courtesy of Wikipedia. I really wanted one of Beowulf ripping off Grendel’s arm, but I didn’t know whether it would be safe for work.