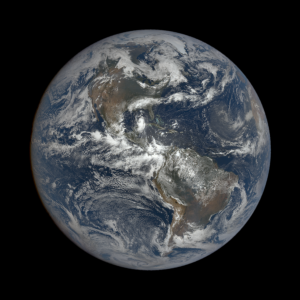 I will not list the bad things that have befallen us all in 2020. We still, in the States, must endure two more months before a fraught election, spikes in COVID deaths, civil unrest, tropical storms, wild fires, hurricanes, and perhaps a stray asteroid. Yes, a small one will pass the Earth the day before we go to the polls (or vote by mail and cross our fingers).

The idea for this metaphor struck me, like the eyewall of a Cat-4 storm, last night as I saw an image of our fragile, string-of-light cities dwarfed by Hurricane Laura. Truly, it’s a horrible year.

No, it’s not 1914 when Europe realized what modern warfare and the Maxim gun really meant. It’s not 1348 when the Black Plague carried off perhaps 50% of Europe’s populace. It’s not 1492, when the genocide of indigenous peoples in the Americas began, or 1619, when the first slave ships came to Virginia. It’s not 1945, a year of victory for the Allies but for the citizens of Axis nations, a time of fire-bombs, starvation, and atomic weaponry. It’s not even 1918-19, when the “Spanish Flu” (which seems to have begun at Fort Riley, Kansas) took the lives of perhaps 50 million, globally.

Have I made my point? Any of these could, depending on one’s view of events, be an “annus horribilis.” The term itself, a modern borrowing from Latin, surprises me by only dating to 1985. Queen Elizabeth II’s famous quip with the term comes 1992, and that’s when I first heard the phrase. If you are curious why, read this. The OED notes the kinship with the earlier annus mirabilis, or year of wonders. John Dryden published a book of that title in 1667.

Image Credit: NASA/NOAA. Note the storm is visible from a million miles out. 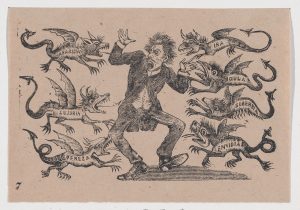 After last week’s insidious, I ran across its near homonym. With school beginning and the need to ramp up student vocabularies increasing with the pile of reading on that way, let’s sort these two words out.

Insidious and invidious both have Latin roots and negative connotations, but if the former relates of subterfuge, invidious is more candid: any action or statement likely to spur resentment, offense, or anger.  As with last week’s word, our word this week has barely budged in its meaning since the 17th Century. You’ll find lots of interesting examples in the OED entry. Most commonly today, we talk about an “invidious comparison,” such as this one, from the blog for writers, The Wickeds:

“If you don’t write everyday, you can’t write a book.”

Poppycock. The disempowering message from these morons is, “You can’t write a book.”

That sort of comparison teams up something awful with something desirable. It’s sure to provoke.

I ran across our word in a book that did get written, and written well, The Men Who Lost America, about the British leaders of the Revolutionary War. Here’s the usage by author Andrew Jackson O’Shaughnessy.

“In the view of one Cabinet insider, the government was in an invidious position and could not afford to risk alienating the brothers by denying their terms.”

Well respected General Howe and his older brother, Admiral Howe, proposed a peace conference to the Americans, something George III vehemently opposed. But the British government decided to both make war and offer an unsatisfactory peace at the same time. The brothers’ initiative failed, miserably.

We know the rest.

As the year begins with uncertainty,  be sure that we’ll press on here. Send us words and metaphors! E-mail jessid-at-richmond-dot-edu with your nominees. See all of our Metaphors of the Month here and Words of the Week here. 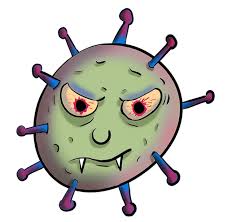 Is this an apt word for these times?  This darned virus is so…insidious. It’s a fine, formal word for something the creeps up and does terrible things.  While the OED claims that it means “full of wiles or plots” the dictionary quotes a 1900 usage for an “insidious disease.”

How can something lacking human agency (or even the stealth of an animal predator) be insidious? “Operating secretly” from the OED definition provides the key. Our current virus fits the term, because its effects vary, its symptoms may not appear at all, and its latency seems just long enough to let it spread. Moreover, COVID-19 has social beings so clearly in its sights: I’m being cynical, but our modern economy at times seems based upon restaurants, bars, beaches, and fitness centers, all great ways for the virus to spread.

Just as last week’s “peroration” gave us our modern “oration,” “insidious” breeds other terms, such as Darth Sidious from the tragically awful Star Wars prequels. I don’t recall much about the character in those poorly written films, save that he became the Emperor later. He was certainly a creeping, slowly growing menace. Thus he was clearly “insidious.” I suppose “Darth Insidious” would be too obvious, even in a rotten movie? Or redundant (here comes another pop-cult reference) such as The Evil League of Evil from the brilliant Dr. Horrible’s Sing-Along Blog?

Time to see that one again.

While you are laying your insidious plans for Fall, send us words and metaphors! E-mail jessid-at-richmond-dot-edu with your nominees. See all of our Metaphors of the Month here and Words of the Week here. 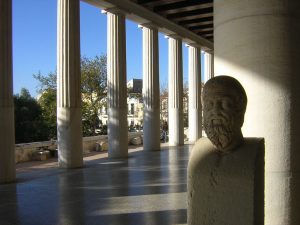 George Souleret, whom I met during his time with University Facilities as an HVAC Engineer, nominated this week’s word. I saw it first as “perforation,” and wondered to what new uses that old term had been put.

Blame bifocals or autocorrect, but I need to thank George for teaching an old faculty member a new word that he most certainly should know. According to the OED, our word is a speech (sometimes just the end of one) or discourse in general.  I often tell students that academic discourse as we know it, as well as reasoned debate in the Western tradition, began in the era of Socrates. I visited the site of the Athenian Agora in 2007, and to me it was as sacred an experience as I’ll ever have in this life.

We have some excellent perorations, such as Pericles’ famous funeral oration, given before the great plague of Athens, a story that we may wish to revisit today. That epidemic swept away Pericles and two of his sons.

On a lighter note, I love one current usage given: “A perfectly dreadful hour-long peroration by an American scholar.”

Thus I’ll spare you a dreadful peroration on peroration. In an election year, I expect we’ll have our share of perorations, some dreadful, a few delightful.

But the term does provide a formal and Latinate synonym that, in the right place, provides an option to “speech,” “presentation,” and other similar terms.

image of the Stoa of Attalos, housing the Athenian Agora Museum by me, 2007.