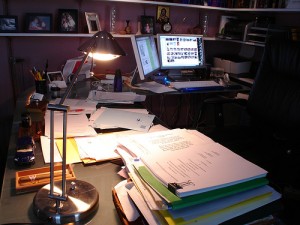 When faculty believe that they have failed as writing instructors, why do they fear that outcome? We might dread poor evaluations, angry or quiet classrooms, or–the worst fear of all–that we have let down students on their journeys to attain something like wisdom.

I say “something like” because no university education or series of excellent assignments can impart wisdom. At best, I might lead writers to see how poorly they are served by unsupported generalizations. In fact, I often try to do no more than that, plus get writers to pay attention to their own words, in the course of a semester.

Assignments might fail, even the pilot-year of  new class. But faculty members, like their students in a writing-intensive course, can learn from failure. Perhaps not enough time in graduate school goes into examining the psychology of designing assignments and conducting class, but the hard lessons of failure should be added to the curriculum. I never once did the sort of role-playing exercises that Ryan and Zimmerelli propose in their training manual for peer tutors (106-110).  Had I done so, in the presence of a faculty mentor, I might have avoided what occurred my first semester teaching writing.

It might be a counterpart to a book that is making the rounds, The Blessing of the B Minus.

At Indiana I was so terrified teaching my first class that I broke into “flop sweats” in the classroom that night in Ballantine Hall.  That got better fast, but one event sticks with me to this day. I had a student named Ellen who was a talented writer, a product of one of the best high schools in the state. But Ellen never pushed herself as hard as she might. She got an easy A on my first essay, a short diagnostic piece that counted little toward her final grade. The exercise intended to point out to me which writers had trouble with remedial issues; Ellen had none.

We Associate Instructors had been schooled in Elbow’s ideas and had read Nancy Sommers’ “Responding to Student Writing,” a 1982 masterpiece that changed my philosophy of writing commentary.  We had not, however, discussed what to do with a writer who had never before received a B- on anything. Anything.

Ellen appealed that grade, her second of the term, to me, and I patiently sat down to show her why the project did not match expectations for academic writing. She was crushed, despite my assurance that the second paper would count no more than 10 or 15 percent (I forget) of the final grade. Never before, she noted, had she gotten anything lower than an A.

She thanked me, gathered her books and papers, then left the ready-to-be-condemned building that housed the AIs. I was a terrible undergraduate until my last year, so I watched her with real puzzlement as she strode off into the Hoosier twilight.  The next class, she was absent. And the next. Indiana was not Richmond, and I had no way of letting an advisor know. There were no e-lists or other means of communications, beyond a land-line phone.

I thought the student was gone from campus, perhaps ill, until I crossed paths, literally, with her a month later. She crossed the street to avoid me, and did so again once or twice. Bloomington is a small town, so when I never saw her again, I wondered if Ellen had left the university. And was it my fault?

She got an F in Eng. 131 since she never withdrew.

Steve Sherwood’s article for writing tutors, “Apprenticed to Failure: Learning From the Students We Can’t Help” provides signal advice for teachers as well as for peer tutors. Sherwood advocates Peter Elbow’s advice that we should create “Evaluation-free zones” on our campuses (qtd. in Sherwood 53). We faculty might enable writers to practice for very low stakes, at first, in order to learn the idiosyncrasies of our academic fields or our personal preferences.

It is easy to say, and be smug while saying it, that a B- is not a life-changing experience, but I do wonder what became of Ellen.