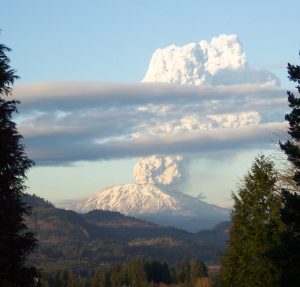 This term is one I do not often use, yet it simply “looks right” on the pages of literary work. Characters experience a paroxysm of grief or anger.

Where did it come from? It resembles, at first glance, no other words we use regularly, even in academic settings, except “paradox.” The OED, as usual, has an answer. The word has Latin roots, but it came to English in the 16th Century via Old and Middle French, for the “onset of an illness.” Though I avoided COVID, right before the pandemic I got really ill: I’ll never forget the onset of symptoms of what seemed like influenza. I lay shaking abed with fever and chills.

If that’s not a term fit for the sudden onset of bad things, which is usually how we employ our word, I don’t know what else would quite fit.  Our word can describe outbursts in nature, too: an Oklahoma tornado or the violent eruption of Mount St. Helens.  That type of volcanic activity would, however, be the opposite of an ongoing and relatively gentler Strombolian eruption, using a word covered here before.  The slow torture of human-caused climate change does not constitute a paroxysm, though individual weather events can.

The only positive use of the word that comes to mine would be a paroxysm of laughter. I hope we all have a few of those this summer with friends and family, after the grim months we all have endured.

If you have words or metaphors you would like covered, send them my way at jessid -at- richmond -dot- edu. 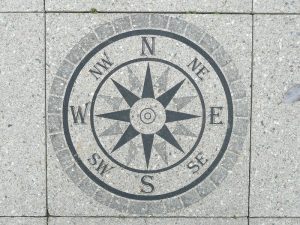 Summer means a time for me to read a book about the sea. I’ve written about this habit before, a strange one for me, as I really dislike the US East Coast beaches south of Maine. Give me a rocky shore near mountains and deep blue water, please, not sandflies, crowds, and blistering heat.

On such a coast as I prefer, a compass rose would come in very handy for a mariner. It’s the often fanciful symbol of a compass on a map. In the image above, one is set in concrete. In each case, the image provides both reference and aesthetic pleasure.

I ran across this term in Nicholas Monsarrat’s 1951 novel The Cruel Sea, an often terrifying account of escort duty during The Battle of the Atlantic. The first ship crewed by many of the main characters is Compass Rose, and I began to wonder why a cartographer’s symbol that looks only faintly like a flower might have earned that honor.

At GISnet, Bill Thoen notes a 13th Century origin for the term, stemming from (pun intended) the resemblance the design to a rose. There was also a device called a “wind rose” for determining the direction of wind, “but the 32 points of the compass rose come from the directions of the eight major winds, the eight half-winds and the sixteen quarter-winds.”

I’m no sailor, so I’ve never heard of half or quarter-winds. Now I have. Thoen’s entry takes us further back than does the OED, which has an earliest recorded use of 1527, describing the symbol as “The roses of the windes or pointes of the compasse.” I like that notion of the roses of the wind, though soutwesterly winds in my part of the world are more like damp blankets. I prefer the west wind or a stiff northwesterly, thank you.

As metaphor, compass rose shares lots of floral company with a host of other similes and metaphors such as “fresh as a daisy,” a downcast “wallflower,” and Virginia Woolf’s famous (and often apt) comparison of academics to hothouse flowers.

May your gardens be full of flowers this summer. If you have any words or metaphors to add, contact me at jessid-at-richmond-dot-edu.