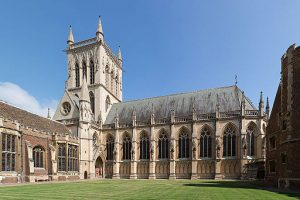 This week we begin a new monthly feature. And the timing, in our second week of classes, is spot-on appropriate.

For new students who may have forgotten the concept, a metaphor is a type of figurative speech calling a person or thing something it is not, such as “John is a real skunk!” or the famous parables in the Bible, with the Kingdom of Heaven suddenly becoming a mustard seed.

Now on to our first academic metaphor.

We think, commonly, of “The Ivory Tower” being the haunt of cloistered academics.  Where on earth did that come from? French, actually. The OED Online traces the origin of our term to the second quarter of the 19th Century, from tour d’ivoire, as a place of sanctuary from the world and its troubles.  The image is older, going back to (thank you, Wikipedia) to The Song of Solomon 7:4:

“Thy neck is as a tower of ivory; thine eyes like the fishpools in Heshbon, by the gate of Bathrabbim: thy nose is as the tower of Lebanon which looketh toward Damascus.”

The similes and metaphors just pile up here, rather odd tools of seduction, and in this book of the Bible they get racy, fast. Have a look yourself.

In any case, I find it fascinating that none of the examples provided by the Oxford English Dictionary, as well as my antique version of Webster’s New Collegiate, show the drift in meaning to academia, especially toward the negative sense that political pundits often use to attack us. Only The American Heritage Dictionary sheds a little light (another metaphor!) on our phrase, noting a place of “intellectual considerations rather than practical everyday life.”

I have many colleagues who would argue that our business in the Ivory Tower is very much about everyday life, especially how to live it in a considered and enlightened way, but this post is no more an op-ed than it is a look at the Bible’s salacious metaphors. Yet that final definition gets us to the pejorative sense of the term. Other ages had Lotus-Lands. We moderns are only left with an ivory tower.

For the first week of classes, I thought to feature a word appropriate to the season. So what is so special about that document, online nowadays, that lists assignments, schedule, and policies for a class?

Not much, really. In sum, it is but a concise summary of a subject to be covered, a compendium, a list. The OED Online dates modern usage to the 17th Century. In Antiquity the term may or may not have had the same meaning, so it may not qualify as a loan-word from Latin.

So as you peruse (or write! the hour is late!) your syllabi for the upcoming academic term, be on the lookout for other traces of academia’s Classical heritage.

The Word of the Week will appear every 2nd, 3rd, and 4th Monday of the academic year, with a new entry, Metaphor of the Month, for our first Mondays. Today’s New York Times ran an op-ed about human hubris and the climate crisis we now face. I use the word “hubris” a great deal in my literary studies classes, too. Many a protagonist, good or bad, gets felled by this fatal flaw of overweening pride.

I’ve always described it in my course glossary of literary terms as “the sort of pride that is so inflated that it blinds, even destroys a character, even an entire people. Many characters in classical literature and Shakespeare’s plays are so prideful that it destroys them. So is Satan in Milton’s Paradise Lost.”

I have never checked a dictionary for our word, so let’s see how I did. Though the Greek original is ancient, this loan word dates only to the late Victorian era. The OED Online gives a few usages, all of them about the same of “presumption toward the gods, self-confidence, pride.” the lack of nuance after the first definition surprises me.

Mere pride is not a vice. One can and should be proud of one’s accomplishments and those of others (envy being another fatal flaw). Hubris is a certain type of pride, however, and in the Miltonic Satan’s will to challenge the Almighty we hear echoes of many earlier myths of mortals who dared to compare their beauty, strength, or courage to the immortals of Olympus.

So beware hubris. It’s everywhere these days. It always comes before a fall.

Gustav Doré’s illustration from Paradise Lost comes to us courtesy of Wikipedia Commons. I first noticed this word when reading Willa Cather’s excellent novel The Professor’s House, way back in graduate school. She describes in great detail the overdone decor of the main character’s abode, including “the awkward oak mantles with thick round posts crowned by bumptious wooden balls.”

The alliteration stuck with me but so did the idea that an inanimate object, rather than a pushy, overly friendly person, could be “bumptious.” The OED’s entry gives a history only dating to the early 19th Century, from a humorous use of the word “bump.”  The sense here is a conceited, self-assured, or offensive person, not a carved bit of wood.

The American Heritage Dictionary adds a possible etymology of combining “bump” and “presumptuous,” which certainly describes a bumptious person, but not a ball.

Perhaps Cather, so annoyed in other places with techniques made possible by modern power tools, just hated the woodwork she’d seen somewhere and could not resist the odd pairing of words. Whatever one might think of it, the usage stuck with me nearly 30 years, much like the memory of a really boorish, bumptious buffoon. Here we have a perfect word for late summer, and just today I heard a BBC reporter use it to describe the weather in a small Cuban town. Weather that hot and humid makes one drowsy, which is the nature of anything soporific.

This word can also be used to describe the actions of certain drugs. John Locke, in an example from the OED Online, noted the “soporifick” virtue of opium as early as 1690.

With school soon to begin, we might note that our word can describe the effect of a boring anecdote or lecture. The OED catches that usage well with an example from 1727, “Hibernian matrons thus of old, Their soporific stories told.”

So it’s more than boring. Not everything that bores you makes you drop off.  But in order to keep you awake, I’ll end now. I’m feeling rather drowsy myself.