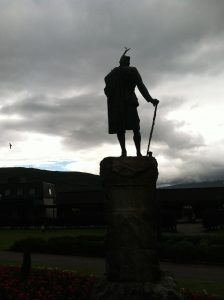 I’m a sucker for a good sunset, and this time of year the gloaming gets resplendent. I heard that word more in the U.K., where summer twilight can be prolonged and magical. It’s a artful word, gloaming, and I almost can spot Robert Burns on some heather-covered hillside, journal in hand, writing a few lines of verse:

The hunter lo’es the morning sun;
To rouse the mountain deer, my jo;
At noon the fisher seeks the glen
Adown the burn to steer, my jo:
Gie me the hour o’ gloamin’ grey,
It maks my heart sae cheery O,
To meet thee on the lea-rig,
My ain kind Dearie O.

Burns reminds us that the gloaming is not necessarily ruddy or wonderful. It can simply be cloudy. 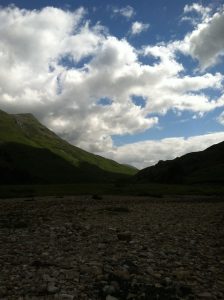 The origin, however, is not Gaelic. Gloaming comes from the Old English glóm,   or twilight. See the OED Online for more on this origin. Our word thus may have crossed from the Continent with Germanic peoples, invading the British Isles after Rome’s Empire in the West fell.

I hope my Scottish friends do not come over and run me through with a Claymore.  In their defense, I have seen my best late-day gloamings and sunsets in Scotland, though more than a few right at home rival their intensity, if not duration. Here’s one from campus, not far from my office. 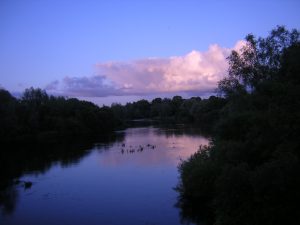 May your Autumn skies be glorious, and your gloaming prolonged.

Images: Fort William and Glen Nevis, near Ben Nevis, Scotland, 2014, by me. Same for the University of Richmond lake view. Verse by Robert Burns, “I’ll Meet Thee On the Lea Rig.” 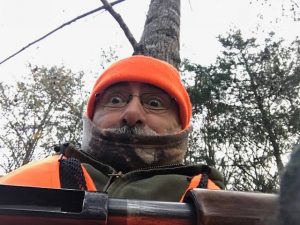 This is a word I once used as an insult for a really clueless person. According to the Oxford English Dictionary, what I used to say is American slang that appeared in the 20th Century. I thought of it as a particularly Southern insult.

What remains mystifying to me is how differently the word has been used in England. There, “Nimrod” is a metaphor that refers to a hunter, after the great hunter from The Bible. That usage goes back as far as the 17th Century. The OED gives two American examples from the last hundred years, including one from a 1994 story in The Denver Post: “Towns such as Eagle, Glenwood Springs..and Gunnison throw out the welcome mat for this horde of nimrods.”

That one has me grinning, imagining a “horde of nimrods.”  How, exactly, did the term for a hunter of renown become synonymous with idiocy? One conjecture, provided at Merriam Webster’s site, is that the original Nimrod not only hunted, but as a king he got associated with building the Tower of Babel. Thus, he helped in a colossally stupid act that ended badly.

That would require more research, but when I think of my 4:30 am climbs up a tree in freezing darkness every deer season, I suppose we have at least two plausible answers.

Decades after I stopped calling people who do stupid things”nimrods,” I cannot quite recall why I abandoned the word. I would like to think that I do not insult others so often.  Perhaps I have been a nimrod often enough, myself.

Update 10/26/18: Writing Consultant Griffin Myers suggested that the conflation of hunter and idiot comes from Elmer Fudd. In several of the Bugs Bunny cartoons, Bugs or Daffy Duck refer to poor Elmer with “what a nimrod!”

As much as I love that theory (and Warner Brothers cartoons) there’s no definitive evidence. There was, however, a lively debate on the topic in the message forums at Snopes.com. Have at it.

Special thanks to Cynthia Price, Director of Media and Public Relations at the University of Richmond, for nominating our word.

Image: Shotgun selfie from last deer season. What a Nimrod! 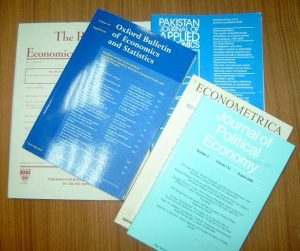 “Referee” sounds simple enough to sports fans, but in academic parlance the term has much the same meaning. The OED shows us the common link: many circumstances where a neutral judge or arbiter or official must make a decision.

When one submits work to a refereed (or peer-reviewed) journal, the arbiters are not just the editors of the journal, but a panel of informed professionals in the field. I found the University of Texas Libraries as well as my own campus library offer fine guides on this.

The verb “referee” is quite similar. 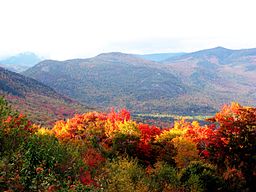 Perhaps, by the time this post runs, the weather will match the season. Yet we do have a lovely word of the week, one often used quite metaphorically.

Solidly in the realm of the humanities, our word can imply middle age, as in “during my autumnal years, I plan to take up fly fishing.” We thereby imply someone past her or his prime, then, and the OED notes how in this sense “autumnal” is often negative. Personally, I find the word to be wistful rather than pejorative. Perhaps that’s just me and my next-to-favorite season (right after Winter).

I do not often hear “vernal” used in a similar way.  In terms of etymology, The OED Online takes us back to the 15th Century for both “autumn” and our adjective, borrowings from Latin.

Students might use our word and end up sounding pretentious. I suspect it is best left for creative writing or in its literal sense of something pertaining to the Fall season, such as the autumnal equinox or “My old grade school will host its Oktoberfest this weekend, an autumnal ritual ever since my childhood.”

My hope is that all of us will experience autumnal weather soon this year and in the decades ahead. Our currently endless summer fills me with dread.