Two mushrooms walk into a bar. The bartender shouts “Out with you!  No plants allowed!”

Okay, it’s not only a bad joke, but it should be “a fungus” (singular) for  you  botanical purists.  In any case, I did just check and fungi are not considered plants.

When my colleague Professor Jack Molenkamp, Visiting Lecturer in Business Law and Adv Business Law in the Robins School of Business, requested our word, that old joke reared its fungible head. Yet why  “fungible” for a bad joke?

In law or business, a fungible commodity can be exchanged for another without “breaking the terms of a contract,” as The OED patiently explains. We see this at rental-car agencies, when the Nissan Sentra you planned to rent gets replaced by a Toyota Corolla. Under the terms of the rental agreement, you get a compact car in return for the daily fee; no guarantee of color or model gets stated. If one reads the small print, it specifies that another make can be substituted. Thus, anything fungible can be broadly considered “interchangeable” or “replaceable.”

As Thanksgiving approaches, consider the self-inflicted plight of Neal Page, Steve Martin’s character from the brilliant Planes, Trains, and Automobiles. Trying without success to get home in time for Thanksgiving, Neal encounters one disaster after another, raging at a clerk that he just wants to get into a [expletive deleted] car. No dice for Neal. He should have read the contract that he threw away in anger; his car is gone from its parking spot but without the paperwork, the rental agency has no legal obligation to provide another fungible asset to replace the one for which he just paid. 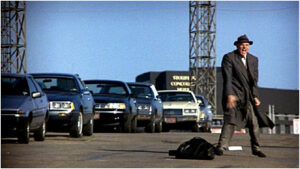 Like Neal’s car, a fungible item, or side dishes offered with the entree (without an upcharge) at a restaurant, the subject of a “walk into a bar” joke can be exchanged infinitely for other subjects without changing the terms of the joke. Thus my favorite:

A three-legged dog walks into a saloon in the Old West and says “I’m lookin’ for the man who shot my paw.”

Okay, I’m done. My colleague did not need bad jokes, but he did need to tell me how greatly it puzzled him that his students did not know the meaning of “fungible.” I agree with him: anyone in business or law needs to understand the concept of fungibility.

As with “pagination” last time, I lay the blame on students not being serious-enough readers. You cannot acquire a strong vocabulary without reading. Sorry, students. Since few students read blogs, I again address my audience of faculty and staff. What are the key words in your field that an undergrad should know before getting a degree?

Why does the lack of reading among students (and peers!) irritate as much as, say, Neal’s situation in the rental car lot?

Nominate a word students need to learn by e-mailing me (jessid -at- richmond -dot- edu) or leaving a comment below.

Photo mashup by me. I prefer the Corolla’s grille and hue. 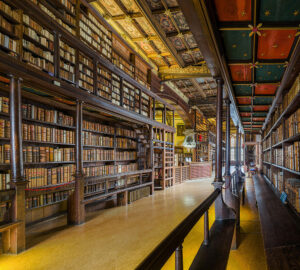 Students delight me when they ask the meaning of a word I use. I do not dumb down my vocabulary for them, though I also do not employ arcane jargon best left to fellow specialists in my field. Asking mentors provides one good method for learning new words. Reading, of course, works even better.

But when I was asked what “paginated” means, for a moment I got taken aback. Not in contempt for my undergraduate questioner but for an increasingly digital world we inhabit, a world that terrifies me because like universities, I see a culture of bookishness as a shield against a Dark Age that might be as close as  a few more tragic national elections.

The word “paginate” comes from a post-Classical Latin root, paginare, dating to the end of the last Dark and Middle Ages in the 15th Century.

Modern usage in English for “paginate” dates to the middle of the 19th. That’s not a long time, historically. To paginate means to put a text in order by pages. Nothing more nor less. The OED entry comes across as simply and elegantly as a well designed book.

Now, with real concern I don’t know if the Enlightenment that followed pagination, sparked by printed books, has run its course.  Some of my students are anxious about this, understandably, and that brings some comfort.  They will have to fix it, as with climate change, racism, and other evils of our era.

As a reader who knows me can attest, I am a person of the book. Personal and public libraries likewise bring comfort in uncertain times and remind me, a first-generation college student, how tenuous and precious a life of books can be, as well as hard-won. Please do not call me a Luddite–I code poorly and manage a Web server–but what Howard Rheingold called the Amish: a techno-selective.

Like shifting my own gears and working a clutch, a now-arcane art I mastered at age 60, buying, reading, and collecting printed texts puts me close to a technology. Two, really: bookmaking and the language we use to communicate.

While I do read some scholarly and journalistic work on a screen, most all reading for pleasure gets done using paper texts that have page numbers. One odd exception: Rowling’s Harry Potter novels, since I began them that way on my iPad in 20`14 when traveling in Scotland (I’m going to read the fourth installment next summer).

My students, on the other hand, inhabit a different world, a mostly unpaginated world. Even back in 2011, as I reported here, blogs like this one were being read and written less by young people. Incidentally and coincidentally, first-recorded use of “pagination” dates to 200 years before that blog post, a bit earlier than the verb form. One wonders how long a run it will enjoy, now.

So be it. What students do with their free time is their choice. I’m delighted when they read this blog, but faculty, staff, and visitors have long been my audience here. Yet for everyone, the world of ideas demands long-form narrative in many fields and books remain a remarkable technology for delivering these narratives.

How to fight this? When my students do bibliographic word, I make them delve into a few print-only resources, citing their work with page references. Yes, I check every one of those.

More hangs in the balance than we might imagine, retaining even faintly a culture of paginated books. I’m worried enough about paginated media that I’m going to start a new category of posts here for endangered words. 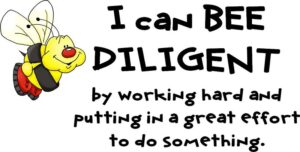 Just today I thanked a student for being so diligent. Then I wondered when she may have last heard that word. The word seems, like diligence itself, to have fallen out of favor in our harum-scarum culture.

This week’s term is OLD. Look at the OED’s entry, with a first recorded use of 1340. The Latin roots of our word need no lengthy explication. What strikes me as fascinating involves the rather small number of definitions: like the virtue signified, the word for it remains industriously, assiduously, painstakingly, on a single path.  I got to use a few synonyms in that sentence, too.

Now don’t mistake being diligent for being brilliant. Sometimes to pays to “work smarter,” as a cliche goes. But attention to details never hurts.

Finally, consider being diligent before using “super,” a word I detest in writing and tolerate with a cringe in speech. Yes, cringe. I will lose that battle. Why not avoid “he worked super hard” and instead use “he worked diligently”?

Because: rushed, careless, harum-scarum. And there I rest my case as diligently as a I can.

Image by Enokson from Flicker. I keep bee-hives and these creatures exemplify diligence. 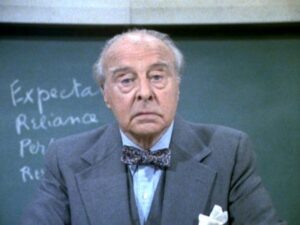 I have a student taking a class on this topic, yet she remained unaware of the term’s precise meaning.

Being of no help until we consulted The OED, I decided that we had a new word for our blog. What I found at The OED entry surprises me. I’d guessed that the word serves the same purpose as “pedagogy” in my field: a theory of learning. In the case of jurisprudence, we have a theory of law.

That proved accurate, but one definition arose: skill with practicing law. That nuance gets at another worthwhile meaning, indicated by the same root that gives us “prudent,” or taking care, being careful.

Finally, our word can indicate a body of laws, something that relates it to the notion of legal precedent.

I hope this post assists my student bound for law school as much as I have enjoyed writing it!

Image of John Houseman from The Paper Chase.