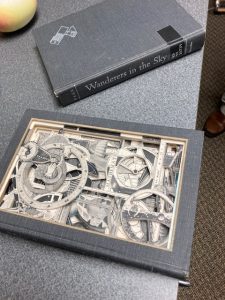 The planets, and outer space generally, have been making the news, so I wanted to look at the word itself. What other terms sound like it in English? Not many.

I was looking at a piece of commissioned “book art” in a colleague’s office, made from a text called Wanderers of The Sky, and then asked if my assumption were correct. The word “planet” comes from an ancient Greek term meaning “wanderer.”

My recollection of my history of astronomy courses comes in handy, here. To the Ancients, the inexplicable (to them) phenomenon of retrograde movement by the planets proved baffling. As a planet’s position across the sky changes night to night, eventually the thing appears to move, temporarily, backward.  It wandered. As the EarthSky site linked explains, you can see this when driving:

With a sun-centered solar system, the explanation is easy: we are lapping an outer world. With Earth at the center of the pre-Copernican universe, however, all sorts of baroque, even perverse, explanations got proffered to explain the way the lights in the sky behaved.

The OED entry on the term confirms this origin, and thus I’ll tag this post “loan word.”

Here’s a word we use literally, save in adjectival senses I find silly, such as a Frito Lay’s extinct “Planet Lunch” snacks marketed to harried cubicle clones (and, as a quick Web search reminds me,  little kids who should eat healthier).

Compare how we use “star” metaphorically each day to describe those famous for their fifteen minutes under the sun. Or “sun,” as in Shakespeare’s famous play on the word in Richard III, using both metaphor and a play on the word “son” in one sentence:

As we amble, like planets in their orbits, toward the start of the semester I’ll update the site with new words and metaphors on occasion, until our pace quickens in September.  If you have words or metaphors you would like covered, send them my way at jessid -at- richmond -dot- edu.

Photo by the author