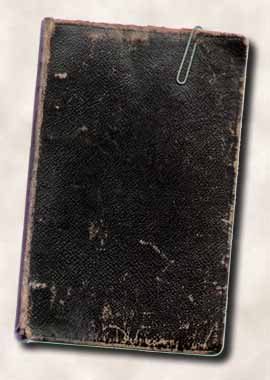 I recall when my father, a man of limited means, brought a copy of Webster’s New Collegiate Dictionary into our house. The old man knew I had academic promise and such a book, I’m sure he was told, would help me get ahead. I recall the reference book that survived to accompany me to college, sitting on top of the ancient, rumbling GE refrigerator.  My paws were only to be on it when I was doing school work. Hardbound books were expensive.

Of course, I stretched out the time I spent doing homework to leaf through the dictionary’s bible-paper pages, learning new words and the black-and-white drawings of everything from magnetos to Piltdown Man. That habit remains with me, as does the wonderful dictionary.   When I write, I often think “my God. I’m made of words. They are my surest companions.” If the office caught fire, I’d grab three things, in this order: the photo of my wife, the laptop, and the old dictionary. As I age, I find myself clinging to linguistic habits that, at times and to paraphrase T.S. Eliot, seem to be shards shored up against the ruin of our shallow times when language gets twisted to venal ends and louts shout into radio microphones.

The old book taught me a new lesson last week, while I was trying to find a precise  definition for the loan-word “mÃ©tier.” My enormous copy of the American Heritage Dictionary lacked the term.  I turned to dad’s old standby and there it was, with enough context for me to employ the word properly.

Sven Birkerts, in his magisterial and sad work The Gutenberg Elegies, noted one of the effects of networked communications on our habits of language, self, and history. In all cases Birkerts sees a flattening of perspectives, a loss of nuance, and an erosion of propriety. I find that a bit prudish–I am a blogger, a smartass, and user of virtual worlds–but I will agree that nuance helps us to shape utterance to meaning. Without a good vocabulary, we exist in a semantic cage.

When I finished my M.A., my parents made the long drive to Bloomington, Indiana to attend the commencement. They asked what I wanted as a present, and I didn’t hesitate: another hardbound dictionary. We got an updated version of the New Collegiate at the IU Bookstore, and it too lives with me. When one of my great-nephews or nieces goes to college, if he or she is like me and as likely to consult paper as well as pixels, I’ll send that newer edition along.

That’s a ways off, so the older copy will have a vacation at a bindery soon, to get the spine repaired and perhaps a new library binding. It should then last the rest of my days on this planet, a constant touchstone for my life, if only to see what time does to our language. Location: Doing ONE Thing at a Time
image courtesy of UCLA Magazine

I was pleased to see “Hooked on Gadgets, and Paying a Mental Price” in The New York Times, and it’s a decent follow up to my recent post about why I resist getting an iPad right away.

My own students love to multitask, and, frankly, often their work lacks depth because it has been done haphazardly and with partial attention. Too many students get Cs or lower because of this. Even though I encourage multimodal work that includes more than text, the core of the idea under discussion must be sound, and the execution must be excellent to earn an A.

A few of us in academe, notably Michael Joyce in his book Othermindedness and elsewhere, have celebrated the ways in which we think laterally and associatively, under the influence of networked technology. Joyce once praised “successive attendings” as more important to our future than a sustained attention span.

I won’t deny that appeal and the power of lateral and associative thinking, because brains like Thomas Jefferson’s thrived on it. But sadly, for most of us multitasking seems an either/or proposition. Michael Joyce has always impressed me with his expansive mind, like his fellow poet Walt Whitman’s, able to contain multitudes.

Most of my students, as well as this writer, can contain only a few things at a time. The result of trying to overload the brain often comes with a price, and for students, it’s likely the one paid by Connor, the son of one of the people interviewed for the Times story:

Connor's troubles started late last year. He could not focus on homework. No wonder, perhaps. On his bedroom desk sit two monitors, one with his music collection, one with Facebook and Reddit, a social site with news links that he and his father love. His iPhone availed him to relentless texting with his girlfriend.

Connor began getting Cs in school, largely, his parents claim, because of his multitasking. And that is what happens too often to my students. Parents can–and too often do not–encourage better habits by example and, old schooler that I am, punishment. But Connor’s parents are both heavy multitaskers, so dad interrupts vacation time to check mail and make calls. That’s a different world from that of my med-school-bound friend John, when he was in high school. After one B on the report card, John got pulled from our gaming group until he again got straight As.

John got the scholarship to UVA. I limped in and out of Virginia with a C+ GPA. I will admit that I had a lot more fun.

Some diversions were different then: paper-and-dice games, dorm bull sessions, movies in an auditorium and not on a computer. Others, notably women and beer, remain the same. But the effects of dividing my personal time were pernicious. Luckily, I had no cell phone or laptop when I burrowed into the depths of the Alderman Library to read and prepare drafts in writing.

Now, every square centimeter of our campus library has wireless access, and the students don’t look up as they cross our beautiful grounds. Their thumbs are busy, texting. With that goes a chance at introspection. As this shift has happened, I’ve grown less afraid that my students won’t know the fable of George Washington and the cherry tree than I am that no one but me and a few other old folks will notice the cherry trees blooming in front of Ryland Hall. This is the emblematic price we pay for multitasking. Cherry trees are the unnoticed wallpaper for student walks, not a vital part of their college experiences to remind them that beauty and youth fade quickly.

One of Sven Birkerts’ great fears in The Gutenberg Elegies, the waning of the private self, is coming to pass. There’s no quiet time alone for those I teach. You can get a 2010 sense of his thinking in “Reading in the Digital Age,” from The American Scholar. The waning process is well underway. How do we fight it?

I’ve learned, the hard way, to tell those who IM me at Gmail, despite the busy status, that “I’m busy.” In Second Life I’m relentless about not answering IMs when building. I check mail three times daily at work, and that’s it. I do not answer the phone, ever.

I’ve recaptured acres of time, as a result. But I have a strong will, strong to the point that I’ll hurt others’ feelings if they interrupt my work. My students, for whatever reasons related to peer pressure and a lack of counterexamples, live in a hive.

As a beekeeper, that’s a metaphor I normally enjoy. But humans are not honeybees.

As a student put in in the UCLA story where I found the image for this post:

“If I’m reading for one of my classes, and doing other things as well, then I am not paying my full attention to the reading, and therefore learning less.”

Other than “focus on one, maybe two, tasks until you are done,” I see no other way around this dilemma. The task is hard, but the reward, as Birkerts notes, is no less than living what Socrates would have called an examined life:

Concentration is no longer a given; it has to be strategized, fought for. But when it is achieved it can yield experiences that are more rewarding for being singular and hard-won. To achieve deep focus nowadays is also to have struck a blow against the dissipation of self; it is to have strengthened one's essential position.