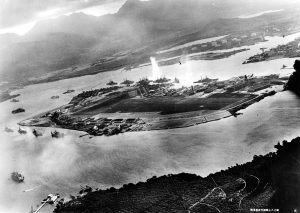 This post will likely run a day after the 79th anniversary of the attack on Pearl Harbor; President Franklin Delano Roosevelt rightly claimed it “a date which will live in infamy.”  Yet when was the last time you heard this word used in any context?

I hope we remember to pause on that day of infamy, reading FDR’s speech annually, but I also hope we add this word to our working vocabularies.  FDR’s first draft read “a date which will live in world history,” but as a source at the National Archives explains, he inserted “infamy” when revising the typescript of what he’d dictated. How he produced something that profound, under so much pressure, should inspire us to do better amid the crisis we face in these comparatively easier times.

The meaning is plain: we understand “fame” being positive, so “infamy” and “infamous” are negative. The term’s origin is Latin and French, as the OED puts it. I suspect an origin far older than the 15th Century, though like many words discussed here, it’s less a matter of first use than of Gutenberg’s invention providing us with the means to check surviving texts.

One legal definition is new to me, of a “loss of all or certain of the rights of a citizen, consequent on conviction of certain crimes.” That seems reasonable enough for some infamous folk, once convicted by a jury of their (presumaby, not infamous) peers.