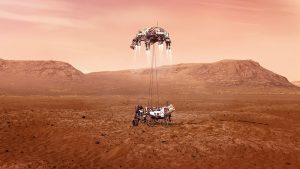 The day this post runs, NASA will have tried something novel for the human race: landing a vehicle on Mars specifically in a site that once held liquid water. The landing technique itself fascinates me: a hovering lander that will use a “skycrane” lowering rover to sample the soils of that ancient lake bed on The Red Planet.

The Rover? As with NASA’s earlier rovers, it has a poetic name: Soujourner, Curiosity, Opportunity.

This one? Perseverance. It takes that quality to send a machine that far on such a hazardous journey. And the word itself?

We have a French loan word, and since that time, the word has remained popular.

The OED’s first definition reveals a meaning that itself has persevered, a “constant persistence in a course of action or purpose; steadfast pursuit of an aim.” I enjoy finding words like this that do not vary over the centuries. Time erases so many things, but some persist.

Student writers might use “persist” as a synonym, yet that word to me, like “endure,” lacks the active nature of “persevering.” A robot like our Mars rover can be active; the evidence of hypothetical Martian life would merely persist.

So consider how, faced with challenges, “carry on” might work for a person or a machine, though it sounds less formal. Perhaps readers can offer other synonyms.

In any case, here’s to NASA’s bold mission, one we’ve discussed in my first-year seminar, The Space Race. Happy landings and good luck hunting ancient microbes. If Mars once harbored life, even microscopic life, Humanity’s understanding of its place in the cosmos would change forever.

2 thoughts on “Word of the Week! Perseverance”