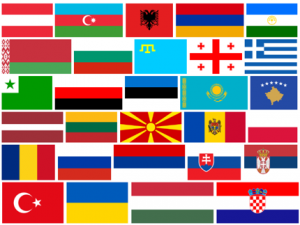 Dan Strohl, my editor at Hemmings Daily, used the word “vexillological” in a sentence about two cars, one a Jaguar E-Type painted in the Union Jack and a first-generation Mustang in Old Glory. As painted, either vehicle proves too flashy for my tastes, but the word?

I’ve never heard of it. In fact, I don’t need The OED this week. The meaning? The study of flags.

As with similar words, it combines the common Greek suffix –logy with a Latin prefix from the word vexillum, a type of flag used by Roman military units. Look around to find dozens, if not hundreds, of -logies. Just over a year ago, I discussed a word for loving words, philology. Many of these terms describe long-standing academic fields. They nod to perhaps what was a more clubbish, even precious time in Academia.

I’ve not met an historian who studies flags, though I’m certain they exist and their work has been well received. I have met flag collectors and hobbyists, just as I’m met philatelists (stamp collectors), and that’s a word I cannot say without chuckling. I imagine both passing gas and a crime that brings 10-20 in The Big House. On the other hand, I can get through a sentence about numismatists (coin collectors) with a straight face, though often with a tangled tongue. I don’t pursue either hobby, though a Byzantine coin in my desk reminds me of how quickly time passes. It’s the oldest thing in our house, worth only about $20 on the market, in case the reader is contemplating burglary. Thus too, the transient value of old things except, perhaps, to busy our minds in useful ways.

On this snowy day I’ll return to one of my hobbies, modeling. No, not posing for photos: building scale models. We need a Greco-Latinate term! “Builder” sounds like an English contractor, “Maker” too coy and hipsterific. One thing of note: model-building may be good for the brain, much like the study of words.

I’d contend that any hobby requiring careful research and some movement or dexterity might do the same. Going out to see rare flags and properly storing a collection mean using parts of our minds and bodies in active ways. Get busy, those of you in your 50s and 60s: join the ranks of vexillologists, numismatists, even those philatelists.

Image source: Collage of the flags of countries/regions participating in CEE Spring 2017, from Wikipedia