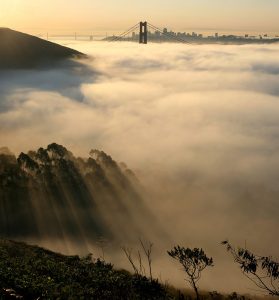 Tip of the hat to my student Gabriel, who used this word well in class. We agreed that in a century, given the tendency of English to Guillotine syllables from certain words, it may be “obscurism,” and so be it.

That’s a feature of English I like. Look for that variant to appear soon; a lazy Google search turned it up in several online dictionaries. There may be a related concept called  “obscurism” in visual art, but my focus is on what The OED defines  as “opposition to inquiry, enlightenment, or reform.”

The practice of obscurantism is all around us, our crowded rooms filled with obscurantists.

Rather than rant about life during the pandemic, I’d rather consider a definition Gabriel and I agreed can occur in academic prose by professionals and students alike. I call it “laying a smokescreen,” where a profession uses deliberately opaque language and syntax to confound potential critics or even, as students too often too, to sound important and lofty.

In my classes, I know BS when I smell it, so it gets cleaned up. We have other devices to add intellectual heft to hefty ideas, such as metaphor and appropriate jargon, but the use of big words by themselves or overly complex sentences do not good thinking make.

Obscurantism does not only occur in the Academy. Consider a failed attempt to warn the power company about the dangers of a meltdown at the Three-Mile Island Nuclear Plant.  You can find an entire chapter about the failed memo here, “Understanding Failures in Organizational Discourse.”

Sometimes managers ignore clear and direct writing, as in the case of Roger Boisjoly’s warning to Moton Thiokol about the dangers of “catastrophe of the highest order — loss of human life” before disaster struck the space shuttle Challenger.

Obsurantism only helps an audience ignore a warning. Have a look at these cases while figuring out how to mean what you say and say what you mean. Please apply Richard Lanham’s “Paramedic Method” to sentences that seem a bit foggy.

I have been called “blunt” and “snarky” by writers of hate-mail about my op-eds, and that’s fine. I like it when colleagues say that, too. I hope never to be an obscurantist. Are you one? If so, why?

Be they foggy, clear, or indifferent, share words or metaphors by contacting me by e-mail (jessid -at- richmond -dot- edu) or leaving a comment below.

2 thoughts on “Word of the Week! Obscurantism”