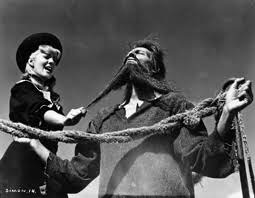 There’s a caricature of a hermit that used to appear in old cartoons: a beard grown so long it becomes the man’s clothing. He was crazy and lived alone in the wilds. Luis Buñuel, one of my favorite directors, captures the life of a religious hermit in his film Simon of the Desert, using his typically surrealist technique to show how, well, bizarre the life of an early Christian hermit could be.  Of course, the devil appears by in the form of a beautiful woman to taunt and tempt him, until they end up back in civilization, 1965 no less, at a club with a surf-rock band jamming as hipsters dance.

I love that so much, but I digress. Behind me, Satan! Back to words.

We don’t hear the word “hermit” much these days, as “shut-in” and “recluse” seem more apt for those in urban settings. To some degree, however, we are all hermits during this pandemic, which could, as an Atlantic Monthly piece explains, spark interest in a short film about Christopher Knight, the hermit of North Pond, Maine. He fared better than Simon, though he too re-entered our world when arrested after a string of burglaries for food and propane. He managed for 27 years that way in the Maine woods.

Though Knight may be our last known hermit, the term itself has a great deal of endurance. Originally, as the OED entry explains, the word stretches back to the Dark Ages, with Medieval Latin and an earlier Greek term as sources. The “H” appeared later, with earlier instances as “ermite” and similar. By the time of Piers Ploughman, the “H” appeared; not long after, the “e” at the end vanished. Variant spellings came down almost to modern times; Shakespeare has the word as “Hermight,” “Hermit,” and “Ermite” in different plays! In fact, looking over the OED entries demonstrates how powerfully English has evolved. Or how little we cared for spelling then. You choose.

Yet hermits remain the same. They continue to appeal to some of us, repel others. Solitude can be good medicine, but too much of it? That’s one reason why Knight’s story continues to interest readers, viewers, and his former, involuntary neighbors.

We welcome dispatches from your hermitages. Send words and metaphors to jessid -at- richmond -dot- edu. See all of our Metaphors of the Month here and Words of the Week here.

image courtesy of The Institute for Contemporary Arts.