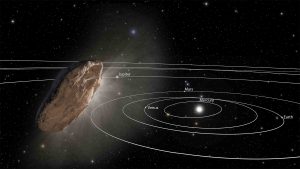 After a holiday break, our metaphors are back. I love this one for its colorful connotation, but it also tells us something vital about how science works.

The OED Online informs us that the idea was named for 13th Century Franciscan friar, philosopher, and scientist William of Ockham, though the concept of “cutting away of extraneous material” is far older. That idea, however, goes beyond the sort of editing of deadwood that I teach to my writing students. Occam’s Razor is about the elegance of choosing the simplest explanation, when many others are possible.

The dictionary notes an etymology only dating to the 19th Century and the single and succinct definition: “The principle that in explaining anything no more assumptions should be made than are necessary.”

Consider a recent conversation where a colleague in Physics employed Occam’s Razor. Not long ago, the mysterious object Oumuamua (also spelled ‘Oumuamua) passed through the inner solar system. Given the object’s trajectory and speed, it appeared likely to have come from another star system. Then a team of Harvard Physicists published a paper that caused a brief news sensation. Among the other possible explanations for our visitor, they note “‘Oumuamua may be a fully operational probe sent intentionally to Earth vicinity by an alien civilization.”

Naturally, this got a lot of popular press. What got skipped by these journalists was the idea that the other simpler explanations for the celestial object’s odd acceleration are more likely. Until evidence for ET presents itself, scientists but apparently not journalists must employ Occam’s Razor. Personally, I would love our civilization to have a Rendezvous with Rama, to cite a novel of first contact by the late Arthur C. Clarke. More likely, however, data will reveal other ways the asteroid could behave as it does.

Less than thrilling? Yes. Good science? Also, yes. Consider that the next time you hear an implausible explanation. Take your razor to it.

As for spelling? Aldous Huxley preferred “Ockham” as late as 1960, in a usage the OED provides. I’d not encountered it in print before today. Huxley also questioned the idea, wondering if it “isn’t a valid scientific principle. Perhaps entities sometimes ought to be multiplied beyond the point of the simplest possible explanation.”  I leave that up to my colleagues in STEM to debate, but I like Occam’s Razor, to cite an earlier Metaphor of the Month, as my Rule of Thumb.

One thought on “Metaphor of the Month! Occam’s Razor”