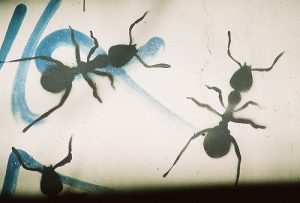 Be sure to not let Autocorrect “fix” this word. Yes, it sounds like “Formica” too, and that trade name of a laminate countertop has a seeming relation to our Word of the Week.

According to Writing Consultant Griffin Myers who nominated the word, it “is the medical term for the sensation like bugs crawling over the skin. This lead me to the Latin term ‘formica’ meaning ants, which I kind of already knew because of the Formics in Ender’s Game.”  Those aliens are really rather terrifying, but I’m still stuck on how a company could think that anything associated with bugs crawling could sell a consumer product, except pesticide.

The OED specifies ants as the creepy-crawlie in its definition. The word is of recent origin, dating to the 18th Century (yes, that is recent for etymology or, for that matter, entomology).

But what about the building material? According to the official Formica account, the name came when the two inventors “needed a substitute ‘for’ mica, so they swapped in the plastic resins, which led to the company name – you guessed it – Formica.” The company site is worth your time, to see those fantastic countertops from the 1950s that still appear in retro diners across the nation. With talent like Raymond Loewy working with the firm, one sees how the trade name became synonymous for any laminate counter.

But ants on the counter? Reach for a damp paper towel and clean up.

Update 1/28/18: Dr. Kristine Nolin, Associate Professor of Chemistry at UR, reminded me that “Ants produce formic acid, which is delivered when the ant bites.” You can learn more from this site. Thanks to Dr. Nolin and the surprisingly large number of readers who saw this post! Send us new words and metaphors!