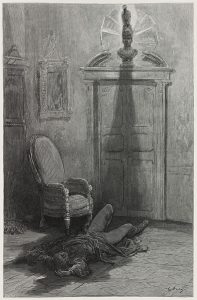 With my favorite holiday of Halloween approaching, I figured that we needed a metaphor that captures dread, doubt, and doom. I must be channeling my fellow Richmonder Edgar Allan Poe, who enjoyed alliteration. On to our metaphor.

Poe’s masterpiece “The Raven” is all about a long, dark night when the narrator faces a sombre truth:

Deep into that darkness peering, long I stood there wondering, fearing,
Doubting, dreaming dreams no mortal ever dared to dream before;
But the silence was unbroken, and the stillness gave no token. . .

If you know the poem, then you know what the narrator discovers about his lost Lenore. If not, get over to the Poetry Foundation’s site and read it, posthaste.

But where did our figure of speech, captured so well in Poe’s verse, originate? The OED Online has an entry about the word “dark” that includes a reference to St. John of the Cross, who believed in a noche oscura that one must endure to come back into the light of faith. It is a “moment of aridity” that a mystic endures, quoth the OED, not the Raven. Over time, the Spanish Saint’s metaphor grew in scope to become any deep enough existential crisis that rocks us to our cores. The Dark Night destroys our optimism forever or we come out wiser and sadder.

Only that, and nothing more.

Academic uses can be literary (of course), political, or spiritual. Historians will speak of a Dark Night of the Soul for people making terrible decisions: despite his many quoted remarks about the strategic necessity of the A-bombings, I don’t know that Harry Truman ever got over Hiroshima and Nagasaki.  It would speak poorly of him if he did ever brush it off lightly.

My first brush with the idea of our metaphor happened in an undergraduate English class. Suddenly there came a phrase for the culminating moment in many a text, such as Huck Finn’s decision to “go to hell” to save his friend Jim; since strong texts often develop out of dramatic tensions in their plots or characters, many feature one or more Dark Nights of the Soul. Existentialist works could not really work with them.

I found more than a few literary uses of the term, thanks to a quick Google and Wikipedia search. My favorites? F. Scott Fitzgerald noted, in The Crack Up, that “In a real dark night of the soul it is always three o’clock in the morning.” Fitzgerald himself struggled with alcoholism and the madness of his wife Zelda. He knew his topic well, as have many other artists.

See you on the other side of Halloween. Good luck.