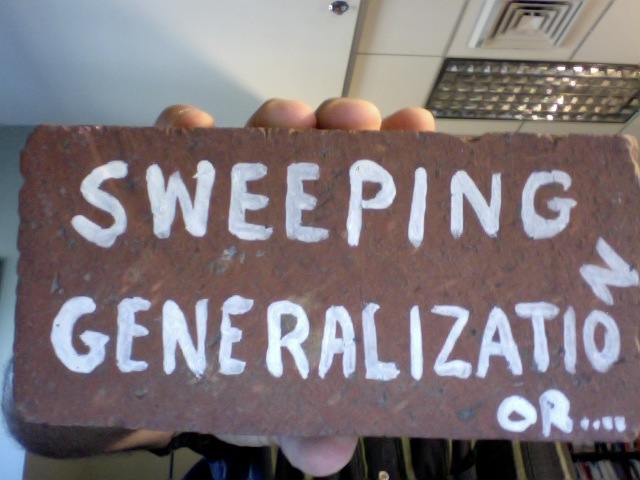 My poor English 103 students! Every time I taught the course, I had a mark of shame that one of us had to bear at some point: The Brick.

One one side, I painted “Unsupported Claim” and on the other, the slogan shown above. I last used The Brick in Fall, 2009 but in the Spring of 2013, it returns for my First-Year Seminar “Cyberspace: History, Future, and Culture.”

No errors can eclipse these two flaws. Even a missing thesis, what I prefer to call a “governing claim,” can take second place in a reader’s mind to an argument so flawed that one cannot read on. While I try to be moderately tough on grammar and usage, if the paper makes a logical flaw meriting The Brick, little else matters to me. This is also why our Writing Consultants begin their work with these top-down concerns.

You can read more about how I used of The Brick, but it worked. When a writer, including the teacher, violated one of my cardinal rules about academic writing, s/he got to keep The Brick in each class until the fatal flaw had been corrected, often in a follow-up post to the class blog. I was given The Brick once by my class, I’m proud to say, but only once that last semester. We can all make fatal errors in argument, but I made a generalization in a post online, and a student was quick to spot it. He e-mailed me, then announced my crime in the next class.

In an age of pixelated writing and 140-character “thoughts” at Twitter, the materiality of The Brick reminds us that some words are not easily retracted. That’s a comforting thought in an election year, when billions of words are spewed, and many of them deserve a brickbat or two.

Now that the Writing Center’s daily consultations are moving to our campus Library, I will move The Brick along, too. Enjoy it and never hurl it!

One thought on “The Brick Moves To The Library”