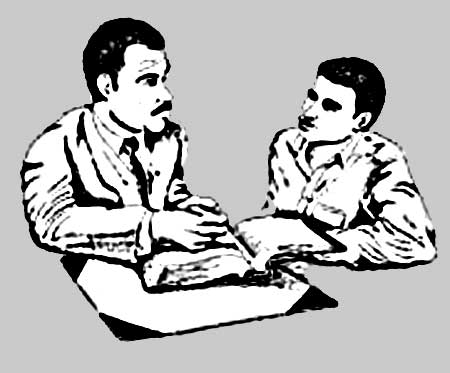 Recently I had a conversation with Dr. Jim Kinney of VCU, a rhetorician who has taught writing for several decades. As he reflected on his teaching during this time, Kinney noticed the greatest improvement in student writing when he used “the Garrison method” of teaching composition. Using a list of specific areas for focus such as pre-writing or invention or organization, Kinney explained that after an initial introductory period, most of the semester involved short individual conferences with students, specifically focused on addressing these aspects of writing.

Intrigued, I googled the name of the method and found that JSTOR had a review of the Garrison method by Jo An McGuire Simmons published in the May 1984 issue of College Composition and Communication. In “The One-to-One Method of Teaching Composition” Simmons offers us a gestalt of the process: “Picture a classroom of students writing. The teacher and a student, sitting side by side, are conferring intensely on a draft of the student’s paper. Two or three tutors may be in the room holding similar conferences. While the other sutdents are waiting for their conferences, they are writing, re-writing and, revising works in progress. What you are seeing is the Garrison or One-to-One Method at work.”

According to Simmons the Los Angeles Community College Distriect tested and recommended the approach in 1974 leading Roger Garrison to publish  How a Writer Works in 1981 . Simmons notes that “the primary assumption behind the method is that the best way to write is by writing and rewriting. Roger Garrison thinks that the best use of class time, then, is not class discussions, nor lectures on writing, nor analysis of someone else’s writing, but writing.” Each conference is limited to one objective and situates the teacher in a less threatening coaching role, helping the student to recognize his own errors and find his own solutions in a series of personalized “mini-lessons.” Such individualized attention is a potent force in a student’s education and a strong draw for the schools or teachers that can provide it with some regularity.

While the method increases individual student attention and decreases time required for final grading, Simmons notes several challenges to this approach. To be practiced as Garrison recommends, each teacher would need two writing consultants assigned to assist with student conferences. This approach also slows production, potentially limiting the number of assignments possible in a semester. In spite of these potential drawbacks, the Garrison method is meant to be flexibly applied according to the requirements of the context. Teachers could apply the method for a specific assignment only or throughout the semester, or the series of objectives guiding each meeting could be abbreviated.

Certainly there is no panacea for producing better writers, not classical rhetoric, not grammar, not reading the great books, not even individual conferences. Ultimately, the quality of a student’s writing depends on that student applying the writing strategies he has been taught.  Nevertheless, few pedagogical approaches are as effective, organic or cost-effective as increased interaction between teacher and student.