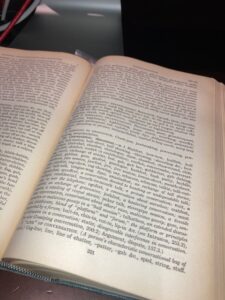 This word came up in class today. We discussed what academic writing is not, and my students noted that mere opinion and an “extreme tone” disqualify work from serious consideration.

So I dropped a “bombastic bomb” on them. Yet this week’s term has nothing to do with explosives. As “bumbast” or “bombaste,” in the 16th Century the term meant the “soft down of the cotton plant,” and could also mean earplugs made of cotton. I’d suppose, from the OED entry, that one plugged one’s ears to avoid hearing a bombastic speaker who employed the current meaning, “Inflated or turgid language; high-sounding language on a trivial or commonplace subject.”

Has this word fallen out of favor? Or simply settled into a settled definition? The latest OED usage dates back 172 years.

If “bombast” proves new to you, as a word in any case, consider some synonyms from a wonderful 1943 book I just found in my favorite used bookstore, Charlottesville Virginia’s Blue Whale Books. The American Thesaurus of Slang, by  lexicographers Lester V. Berrey and Melvin Van Den Bark (such names!) set forth an exhaustive listing of terms not considered formal. It’s a trove of lost words. Several book dealers online list a second edition of 1964; I highly recommend a copy.

None are very formal, save “bloviate,” which captures saying a lot of large words without saying much of anything. The suggested term “polysyllabic profundity” fails there, since bombast proves as fluffy as cotton. “Pompous prolixity” gets closer still to the empty nature of bombast. Unlike “bullshit,” bombast may be true, but the terms used are overly pompous.

What other terms capture a bombastic method of writing and speaking? Let me know. Meanwhile, thanks to several of you who recently sent me words and metaphors I will soon feature here. They are always welcome. Send them to me by e-mail (jessid -at- richmond -dot- edu) or leaving a comment below.

Thesaurus image by the author.