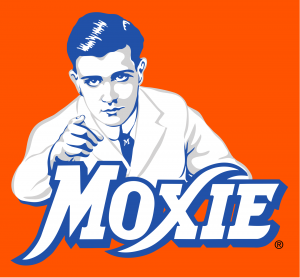 I love this old word, and I’m so out of touch with popular culture that I did not realize that it appears as the title of a 2021 film and a line of dolls.  My life remains complete, but I still like this word. My student John Kurkjian used it in a paper recently, to describe an aspect of heroism that unites the very different characters in the films Hidden Figures and The Right Stuff. John knows a good new vocabulary word when he spies it.

So what on earth is this bit of American Slang? It comes from the trade name of one of America’s first mass-produced soft drinks. From there the beverage loaned its name to personal virtues.  As usual, the OED comes to my rescue, for “Courage, audacity, spirit; energy, vigour; enterprise; skill, shrewdness.” I’ve a feeling we’ll be seeing “moxie” a great deal soon; as with other words that seemed to have fallen into disuse for no good reason, it is primed to make a comeback.

Let’s hope that moxie itself does, too. I don’t drink soda, but I like the values of self-reliance and what gets described with the overused term “grit”; moxie would be a fine companion to them in troubled, uncertain times.

image source: Wikipedia. It’s from one of the nation’s first mass-produced soft drinks.