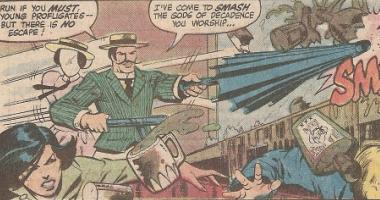 Both as noun and adjective, our word trips off the tongue.

As the curious image given implies, people who overindulge in vices of the flesh are “profligates” to a bumbershoot-wielding vigilante. The term has a long history, with noun & adjective usages, as well as a transitive verb, given by the OED. The Latin original means overthrowing, conquering, and 16th Century English usage includes those senses. Our modern notion of decadence and debauchery came a century later.

As with so many good words, our word came to me while reading comic books decades ago.

Contrary to the fuming of curmudgeons, many comics taught kids a great deal about vocabulary. This began for me with Marvel’s titles in the “Silver Age” of the late 60s and “Bronze Age” of the early 70s, when a stable of talented young writers penned dialogue under the leadership of the late Stan Lee. Enter a well read super villain, Turner D. Century, whom I recently described as ” a puritanical Luddite. Rides a flying bicycle built for two, has a flamethrower umbrella, and his ‘girlfriend’ is a manakin with a bomb for a head. Primo 70s Marvel.” Though Turner actually dates from the 80s, his vocabulary reaches back to earlier times.

“Profligate” works best, to my ear, as a formal adjective implying more than extravagance. To say “His profligate spending on artwork led to bankruptcy” implies a lot in a single word. Thus the power of an elevated register of speech. I try to teach writers this constantly, that big words used well can save space and time.  In another example, my garden is currently profligate with flowers. So our word has some positive uses. How could you have too many flowers?

The verb usage appears rare. I’d never encountered it, in comics or more staid literary work, until I consulted the OED today. Consider how odd it would be to say “You profligated your inheritance 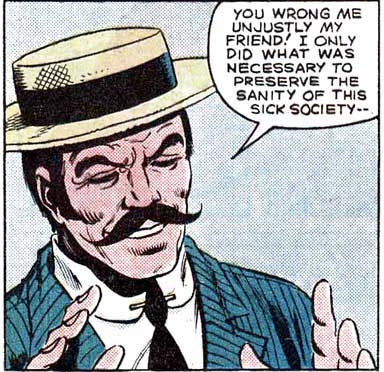 ! Lord Plushbottom, you are ruined!” instead of “Your profligate habits ruined you, M’Lord. The inheritance is gone!”  Both sound like a dramatic moment from Downton Abbey, but the latter example just sounds “right” to the educated ear. We don’t want Turner setting us on fire for a contested point of usage. He just might.

Hear ye, profligates, debauchees, and decadents! Don’t make me send Turner D. Century after you to pry words from your noggins! Do you have a word or metaphor worth pondering? This blog will continue all summer. Please nominate a word or metaphor useful in academic writing by e-mailing me (jessid -at- richmond -dot- edu) or leaving a comment below.

Images by the author, from his old stash of comic books.

2 thoughts on “Word of the Week! Profligate”