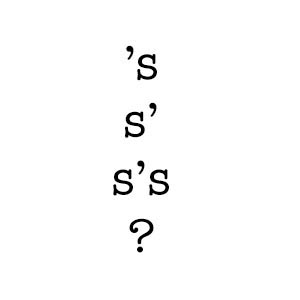 If a reader checks the entry in Writer’s Web, our online handbook, the rules for using apostrophes seem simple enough, whenever a word ends in the letter S:

For words that are plural, such as “Joneses,” just add the mark.

Singular words are different. They take ‘s, as in “I ran into the boss’s car! What do I do?” or “Is that Thomas’s cat?”

Prediction: in 100 years’ time, the possessives of every word that ends in an S will take a simple apostrophe. That is, of course, if anyone still bothers to punctuate.

For now, however, the situation is hopelessly muddled. Our Writing Consultants try to adhere to the simple rules just given, yet in common usage and under “house rules” for various fields of study the matter of correct usage remains far from settled.  Consider this set of exceptions from the Grammar United site about the different house styles for AP and University of Chicago formats. Happy reading.

Listen for the “S”? Why? I envision people reading their work aloud, no bad thing to do, to hear that “s” sound.

So let’s try the grandfather of all usage guides.

Recent handbooks do a better job.

Patricia T. O’Conner, Woe is I

Bryan A. Garner, A Dictionary of American Usage

While I remain reverential to the late Diana Hacker, whose books have so long had an honored place in writing classrooms,  I am going to come down on the side of the living. American English tends to evolve toward simplicity; in this case, the simpler usage does not remove any nuance from our language, and our Writing Consultants have dragons to slay in student work. They do not have time for this particular gnat, let alone deciding how an S sounds or if the context might be poetic or reverential.

Thus, unless a house style dictates otherwise, our Writing Center and I hold with Garner and O’Conner: add an apostrophe only to plural nouns that end in S. Possessives such as children’s hospital or men’s room are different and easy enough. The plurals do not end in an S.

So there we have it, for even the worst possessive obsessive’s grammar notes.

Mr. Fowler, rest in peace, please. And I am so pleased that you began a sentence with a conjunction, as I just did. Hah.