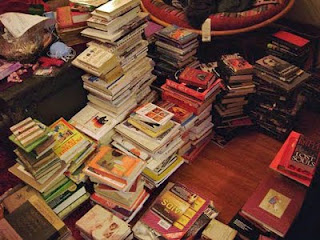 Location: Ensconced Before My Walls of Books

image above is not my office!

In “Into the Electronic Millennium,” a chapter in the very readable and depressing The Gutenberg Elegies, Sven Birkerts laments that our culture of connectedness and instant access destroys something that he–like many Humanities faculty I know on campus–cherish: the contemplative life as reflected in the slow, thoughtful, and reflective reading of challenging books:

Curricula will be streamlined and simplified, and difficult texts will be pruned and glossed. Fewer and fewer people will be able to contend with the masterworks of literature or ideas. Joyce, Woolf, James, and the rest will go unread, and the civilizing energies of their prose will circulate aimlessly between closed covers.

Enter Twitter, with its 140 character tweets, and you have exhibit A for the decline of civilized life as we know it (or maybe we have exhibit R–the lamentations have been going on for a while).

I set out here not to skewer Birkerts or my cyberphobic colleagues. Instead, while reaching to an audience that accepts Web 2.0 tools like Twitter, I want to point out the nature of the cultural decay Birkerts catalogs:

I too fear a future like that of M.T. Anderson’s Feed, a dark satire of a consumerist culture out of control where vagaries such as “thing” and “stuff” are about the most complex terms in the language, where the Internet is in our heads and not outside them, and where no one remembers much of anything from before the globe became a deadzone of toxic waste-sites.

My students read less and less for pleasure. Most take the easiest path in their studies and even crossing campus. They even fight the difficulties of learning the non-intuitive interface of SL. In fact, many of them seem to want a eternal early-June day of temperatures in the mid-80s, low humidity, and someone else to cut the grass they sit on with their friends. In time they may, in another reference in your book, become “efficient and prosperous information managers living in the shallows of what it means to be human and not knowing the difference.” That is Anderson’s vision of a time just before the Great Collapse of American life.

Twitter alone won’t make that future arrive, especially if we academics appropriate (ah, Marx, thanks for that verb) it for noble ends.

So how do we “Fight the Feed” while using it to keep our cherished ways of learning alive?

Good news, Humanists: you still have a mission.

Next Up: Part III–My Sermon To Humanists