Preparation of Citral Isomers and Characterization by 2D NMR

Citral is natural oil derived from a variety plants, including lemongrass and several citrus fruit peels. The oil exhibits a distinct, pleasant lemon-like odor and is used as lemon-flavor additive in many foods, beverages, and cosmetics. While citral is commonly cited as the compound 3,7-diemtehyl-2,6-octadienal, it is actually a mixture of the E/Z isomers known as geranial and neral (Figure 1).

Figure 1. Citral, a natural oil obtained from lemongrass and other plants, is a mixture of two alkene isomers.

These two aldehydes are oils that are very difficult to separate by conventional methods (e.g., column chromatography), so citral is almost always sold and used as the mixture. By contrast, the corresponding alcohols (geraniol and nerol, Figure 2) are separable and readily purchased individually. In order to obtain a pure sample of geranial or neral, you will oxidize the corresponding alcohol (as assigned by your instructor).

Figure 2. In Project 3, you will prepare a pure sample of either geranial or neral.

The oxidation of an alcohol to a carbonyl compound is one of the most valuable functional group transformations in organic chemistry. When the substrate is a primary alcohol, it can be difficult to control the oxidation such that the reaction stops at the aldehyde stage instead of proceeding to the carboxylic acid oxidation state (Figure 3).

Many textbooks describe only “classic” methods for these reactions, but organic chemists have developed a variety of novel reagents and conditions to enable the  direct production of aldehydes from primary alcohols. One such system is the combination of iodobenzene diacetate (IBD) with a catalytic quantity of TEMPO (2,2,2,6-tetramethylpiperidin-1-oxyl).  Although the mechanism of this transformation is complex,  TEMPO is likely the active oxidizing agent while IBD is the stoichiometric oxidant. This means that a molecule of TEMPO will oxidize a molecule of the alcohol. In the process, the TEMPO molecule is reduced and no longer useful as an oxidant. The IBD then re-oxidizes the TEMPO molecule, which can subsequently react with a fresh molecule of alcohol. The IBD molecule is consumed in this process because it is reduced to iodobenzene.  In fact, the mechanism involves several TEMPO-based intermediates as outlined in Figure 4. In Project 3, you will apply the TEMPO/IBD oxidation reaction to generate either geranial or neral from the corresponding alcohol. 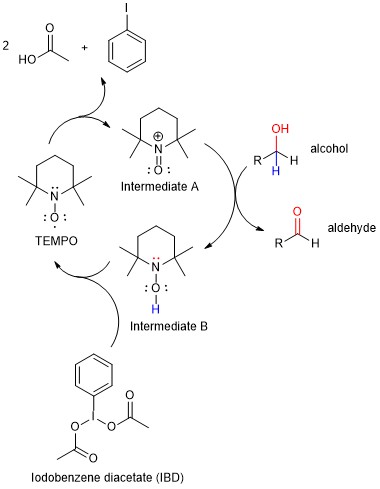 As described in the discussion of the reaction mechanism, the IBD oxidant used in this methodology is reduced to iodobenzene during the reaction. This by-product can be somewhat difficult to remove from the desired product, and column chromatography often is used as a final purification step. However, aldehydes are unique in that they often can be purified by precipitation of the corresponding bisulfite adducts (Figure 5). This method relies on the reversible nucleophilic addition of bisulfite to the aldehyde carbonyl. The resulting derivative is an ionic species that has low solubility in organic solvents and may be precipitated. The solid is then collected by vacuum filtration while the iodobenzene (and any other organic by-products) are washed away from the crystals with an organic solvent. 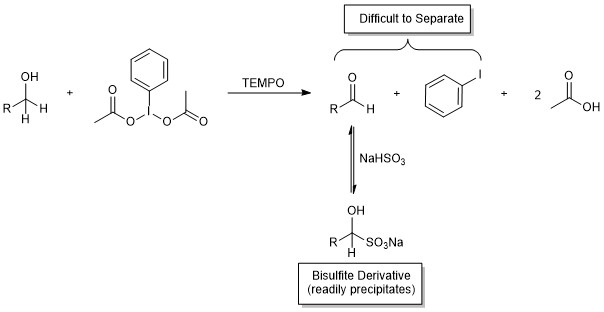 Figure 5. The solid bisulfite derivative is readily separated from the iodobenzene by-product by vacuum filtration.

Since the bisulfite addition is reversible, the aldehyde may be regenerated from the solid derivative by shifting the equilibrium appropriately (Figure 6). This may be accomplished by refluxing the derivative in excess water. The aldehyde product, an oil, is then obtained by simple liquid-liquid extraction and removal of the solvent.