1. Set up a ring stand and with a separatory funnel as illustrated in Figure 1.

2. Make sure the stopcock is closed.

3. Add the solution to be extracted to the funnel.

4. Add the extraction solvent to the funnel. 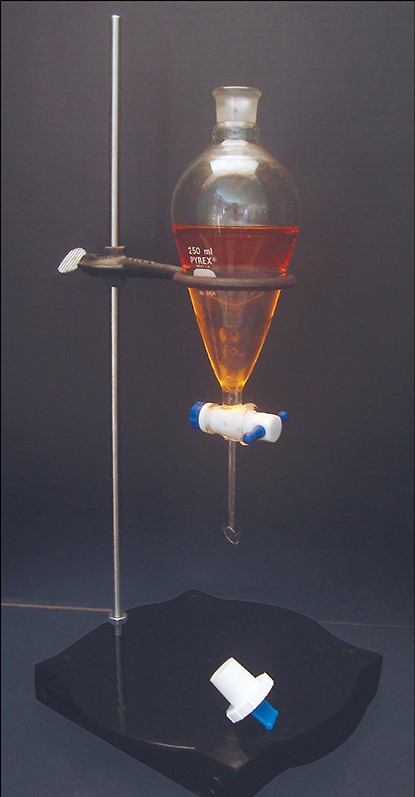 5. Swirl the separatory funnel gently and then stopper it. Give the stopper a gentle twist to ensure a snug fit.

7. Pressure will build up quickly in the funnel as the two liquids mix. Keeping one hand on the stopper to ensure a secure fit, turn the funnel upside down and slowly open the stopcock (Figure 2). This will relieve any pressure build up in the funnel. 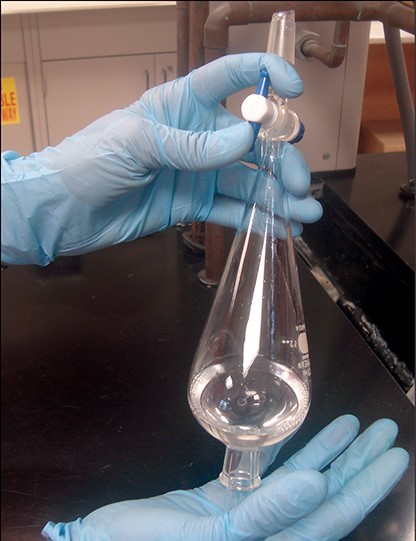 8. Swirl the mixture in the funnel several times, and then vent the funnel as described in step 7.

9. Repeat the swirling/venting steps several times, generally until strong pressure no longer builds up in the funnel.

10. When you have finished mixing, place the funnel back in the ring stand and immediately remove the stopper. After a short time, the two immiscible liquids will partition into layers.

11. Separate the layers by slowly draining the lower layer through the bottom of the funnel into an appropriate receptacle (typically an Erlenmeyer flask). Stop draining once the boundary layer just enters the stopcock. Remember: The denser layer will be on bottom. This is USUALLY (but not always) the aqueous layer. Do not discard any solvents until you have retrieved the compound of interest!

12. Remove the top layer by pouring it out of the open top of the funnel.

13. You may repeat the extraction procedure above if the specific protocol calls for it. Once you have combined all of the solvent layers of interest, you may need to dry the organic solvent by following these steps:

a. Add drying agent in small increments until it no longer clumps or sticks to the side of the flask. Allow several minutes between each incremental addition of the drying agent.

b. When the solvent is fully dried, the grains of drying agent will flow freely in the solvent.

d. Wash the drying agent in the filter funnel with one or two small portions of fresh solvent to remove any compound that may have adhered to the surface of the grains.

14. Evaporate the solvent to yield the purified compound. This may be accomplished by gently heating the solution or using a rotary evaporator. If the compound crystallizes, it may be collected by vacuum filtration.

This video illustrates how to use a separatory funnel to perform a liquid-liquid extraction in the lab.

This video explains the principles that allow the separation of compounds in a mixture by liquid-liquid extraction.