Last year, scientists and science writers got worked up over a bill proposed by Representative Lamar Smith (Republican of Texas) that, it was claimed, constituted an attack on peer review of grants at the National Science Foundation. I thought that that attack was silly. The proposed law, while certainly not a good idea, would have had little or no effect on the peer review process. I still think that that diagnosis was correct.

To repeat something else I said at the time, even if this bill is mostly harmless, that doesn’t refute the claim that Smith is an enemy of science (he certainly is), and it doesn’t rule out the possibility that he does want to go after peer review in other ways.

Since I was (sort of, I guess) defending Smith before, I feel like I should point out that he has been meddling in the NSF review process lately in ways that bother me considerably more than that proposed legislation. Science and io9 have pieces that are worth reading on the subject.

Smith has made a list of grants that he doesn’t like and has had staffers examine the process by which these grants are reviewed. There doesn’t seem to be any question that Smith chose to go after these grants because he didn’t like  their titles and brief descriptions. In other words, as Representative Eddie Bernice Johnston (Democrat of Texas) put it in a letter to Smith,

The plain truth is that there are no credible allegations of waste, fraud, or abuse associated with these 20 awards. The only issue with them appears to be that you, personally, think that the grants sound wasteful based on your understanding of their titles and purpose. Seeking to substitute your judgment for the determinations of NSF’s merit review process is the antithesis of the successful principles our nation has relied on to make our research investment decisions. The path you are going down risks becoming a textbook example of political judgment trumping expert judgment.

Smith argues that Congress has the duty to oversee how NSF is spending its money, which is undoubtedly true. But it makes no sense to do that by picking individual awards based on their titles and having people with no expertise try to evaluate their merits. And in the process, actual harm can be done, particularly if the anonymity of the peer review process is compromised, as Johnston claims it has been in her letter. (I have not examined Johnston’s allegation in detail.)

In case it’s not obvious, let me make clear that anonymity does matter. As an untenured assistant professor, I participated on an NSF review panel that gave a negative recommendation to a proposal from one of the biggest names in my field (someone who could surely torpedo my career). Among the proposals recommended for funding by that panel were some stronger proposals by young, relatively unknown researchers. I hope that I would have made the same recommendation if I had not been anonymous, but I’m not at all sure that I would have.

Smith’s actual agenda seems to be that certain categories of proposals (largely in the social sciences) should be eliminated from NSF funding. If he wants to propose that straightforwardly and try to pass a law to that effect, he has the right to do so. But Johnston’s exactly right that interfering with the peer review process is not the way to go after this goal. In my experience, NSF peer review works remarkably well. Having individual members of Congress examining individual proposals is certainly not going to improve that system.

In one way, Smith’s actions fit into a long tradition of politicians railing against wasteful-sounding research grants. William Proxmire had his “Golden Fleece” awards way back in the 1970s. Then there was this tweet from John McCain: 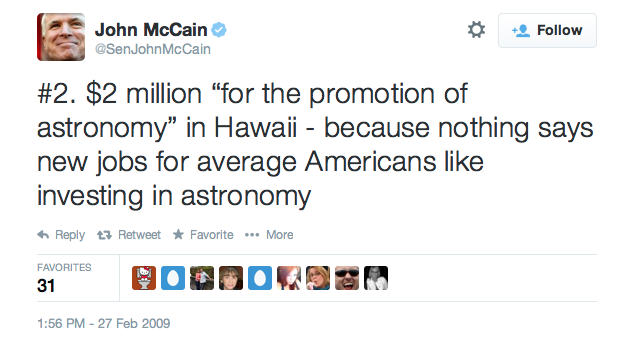 That was actually about an earmark, not a peer-reviewed grant, so it raises quite different issues about the funding process, but as an example of a thoughtless critique of science, it fits right in. (Astronomy is a significant industry in Hawaii, and  astronomy jobs are in fact jobs.)  What Smith’s doing is different from these, because he’s using the investigative machinery of Congress rather than just bloviating.