A while ago, I wrote a bit about how 3D movies work.  One thing I said was

One experiment I wish I'd tried during te movie: put the glasses on upside down, so that the image meant for the left eye goes to the right eye and vice versa.  This should have two effects:

If you try this during a 3D movie, let me know if it works (particularly #2 €” I'm pretty confident about #1).

As every theoretical physicist knows, there’s a danger in making predictions: someone will go out and do the experiment.  My friend Tim Savage comments

Ted, we went to see the 3-D version of "Cloudy with a Chance of Meatballs" yesterday, so I tried your experiment of turning the glasses upside down. I'm sorry to report that you were wrong. It doesn't reverse the depth, it just flattens things out a bit. That is to say, the things that are supposed to be forward are still forward, just not as much so, although a little bit more than in a traditional 2-D picture. It does give you a headache if you try it several times, though.

Even stranger because I’ve subsequently read a bunch of things, including this article in The Physics Teacher, indicating that the model I described was more or less right.   I’m at a loss to explain the data at the moment.  I think I’ll have to go see another 3D movie to see if I can reproduce Tim’s result.

Any further experimental data or theoretical insight will be gladly welcomed.

Results from the Chandra telescope apparently say that Type Ia supernovae are the result of two white dwarfs spiraling in and colliding with each other:

“Our results suggest the supernovae in the galaxies we studied almost all come from two white dwarfs merging,” said co-author Akos Bogdan, also of Max Planck. “This is probably not what many astronomers would expect.”

This is a really surprising result, at least to me.  I was under the impression that the second possibility (accretion) was generally agreed on.  I thought this was well-established, textbook stuff.  I didn’t know there was any significant uncertainty about it.  But I haven’t paid much attention to supernova physics, so I guess that’s just my ignorance.

Type Ia supernovae are very important in cosmology, because they’re pretty good “standard candles” — that is, they all have nearly the same intrinsic luminosity, meaning that by observing the apparent brightness of one you can figure out its distance.  Mapping out the distance versus redshift of these supernovae was the original way that people originally discovered the accelerating expansion of the Universe.

The accretion model provided a nice intuitive explanation of why these guys were standard candles.  Accretion occurs until the white dwarf exceeds a certain critical mass, at which point the star explodes.  So in this model all Type Ia supernovae come from stars of pretty much exactly the same mass.  Presumably there’s no such argument in the merger model.  That doesn’t mean that these supernovae aren’t standard candles: the fact that they are is well-established observationally and doesn’t depend on the theoretical model of where they come from.  But it does make the fact that they’re standard candles more surprising than before.

I’ve mentioned my love of British newspapers before, but the Guardian has reminded me why yet again:

Not to mention free cryptic crosswords.

The Chronicle of Higher Education just ran a column by Thomas H. Benton called The Big Lie about the ‘Life of the Mind’, about the dismal job prospects for humanities Ph.D.’s.  The opening few paragraphs:

A year ago, I wrote a column called “Graduate School in the Humanities: Just Don’t Go,” advising students that grad school is a bad idea unless they have no need to earn a living for themselves or anyone else, they are rich or connected (or partnered with someone who is), or they are earning a credential for a job they already hold.

In a March 2009 follow-up essay, I removed the category of people who are fortunately partnered because, as many readers wrote in to tell me, graduate school and the “two-body problem” often breaks up many seemingly stable relationships. You can’t assume any partnership will withstand the strains of entry into the academic life.

Those columns won renewed attention last month from multiple Web sites, and have since attracted a lot of mail and online commentary. The responses tended to split into two categories: One said that I was overemphasizing the pragmatic aspects of graduate school at the expense of the “life of the mind” for its own sake. The other set of responses, and by far the more numerous, were from graduate students and adjuncts asking why no one had told them that their job prospects were so poor and wondering what they should do now.

I do feel sorry for people who invested many years in getting Ph.D.’s only to find themselves unemployable.  But I have to say I’m dubious of the “nobody told me” claim.  Do people really enter humanities Ph.D. programs without knowing that the job prospects are dire?  Don’t they seek career advice from anyone before applying to grad school?

I suppose that in some cases undergraduates seek advice from their professors, and their professors tell them the ridiculous falsehood that getting a Ph.D. is a good career move.  If so, such professors are behaving in an unconscionably irresponsible manner.  It’d be interesting to know how common that really is.

What really happens, probably, is that the students think that they’re going to be such superstars that they’ll be the ones who get jobs, and their professors, either out of softheartedness or because they actually believe it, don’t tell them otherwise.

One thing that’s important to emphasize here: the natural sciences are quite different from the humanities in this regard.  For one thing, science Ph.D. students are generally pretty well supported: they’re not accumulating tons of debt, and they don’t usually have to work onerous jobs that keep them away from their studies.  (That’s probably the main reason science Ph.D.’s take much less time than humanities Ph.D.’s.)  Also, academic jobs are hard to get in the sciences, but not nearly as hard as in the humanities.  Finally, a science Ph.D. is pretty good training for non-academic jobs.

It’s certainly not the best training: if your goal is to maximize your future earnings, you’d be nuts to go for a Ph.D. in any field.  For instance, you could spend half as many years in law school as you would getting a physics Ph.D., and make considerably more money coming out than you would with a Ph.D.  (Once an economist was trying to explain the concept of opportunity cost to a physicist friend of mine.  My friend said, “I spent six years getting a Ph.D. in physics; I understand about opportunity cost.”)  But people who get science Ph.D.’s have low unemployment and pretty good salaries.  For physics Ph.D.’s in particular, the American Institute of Physics has a bunch of good data on this.

In the sciences, anyway, Benton’s “Big Lie” is actually pretty close to the truth.  If you go for a science Ph.D., you should do it for “the life of the mind.”  That is, you should do it because you really want to learn about and do science.  It may or may not lead you to an academic career down the road, but even if it doesn’t, you probably won’t end up in the dire situation of the humanities students Benton decribes; you’ll probably end up in some sort of technical problem-solving career (anecdotally, software, finance, engineering all seem to be common), doing just fine.

I just got back from a workshop at Case Western Reserve University on various large-angular-scale puzzles in observations of the cosmic microwave background radiation.  I wrote a bit about one aspect of this topic a while ago.  Maybe I’ll write some more about the science soon.  For now, though, here are some pictures from a behind-the-scenes tour of the Cleveland Museum of Natural History arranged for us by the workshop organizers.

Once the tour guides found out we were astrophysicists, they kept trying to tell us we should see the museum’s telescope and planetarium.  But we’ve all seen a telescope or two in our day.  I’d much rather see dinosaur bones.

The tour lived up to its billing as “behind the scenes”: we didn’t actually look at any of the exhibits on display to the public.  We started in a huge refrigerated room housing all of the mounted animals that they don’t have room to display.  These pictures don’t give a good sense of the scale of the place, unfortunately: 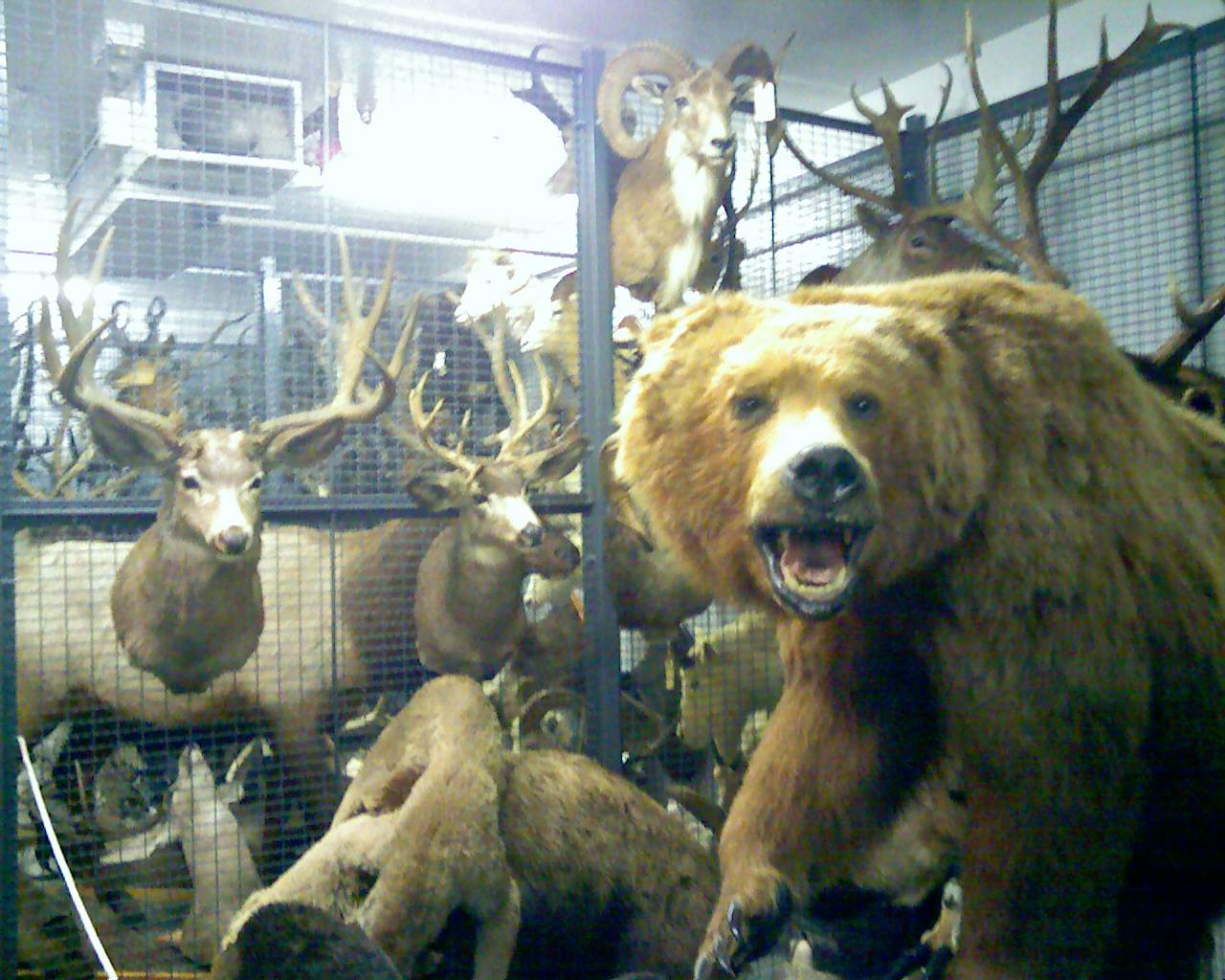 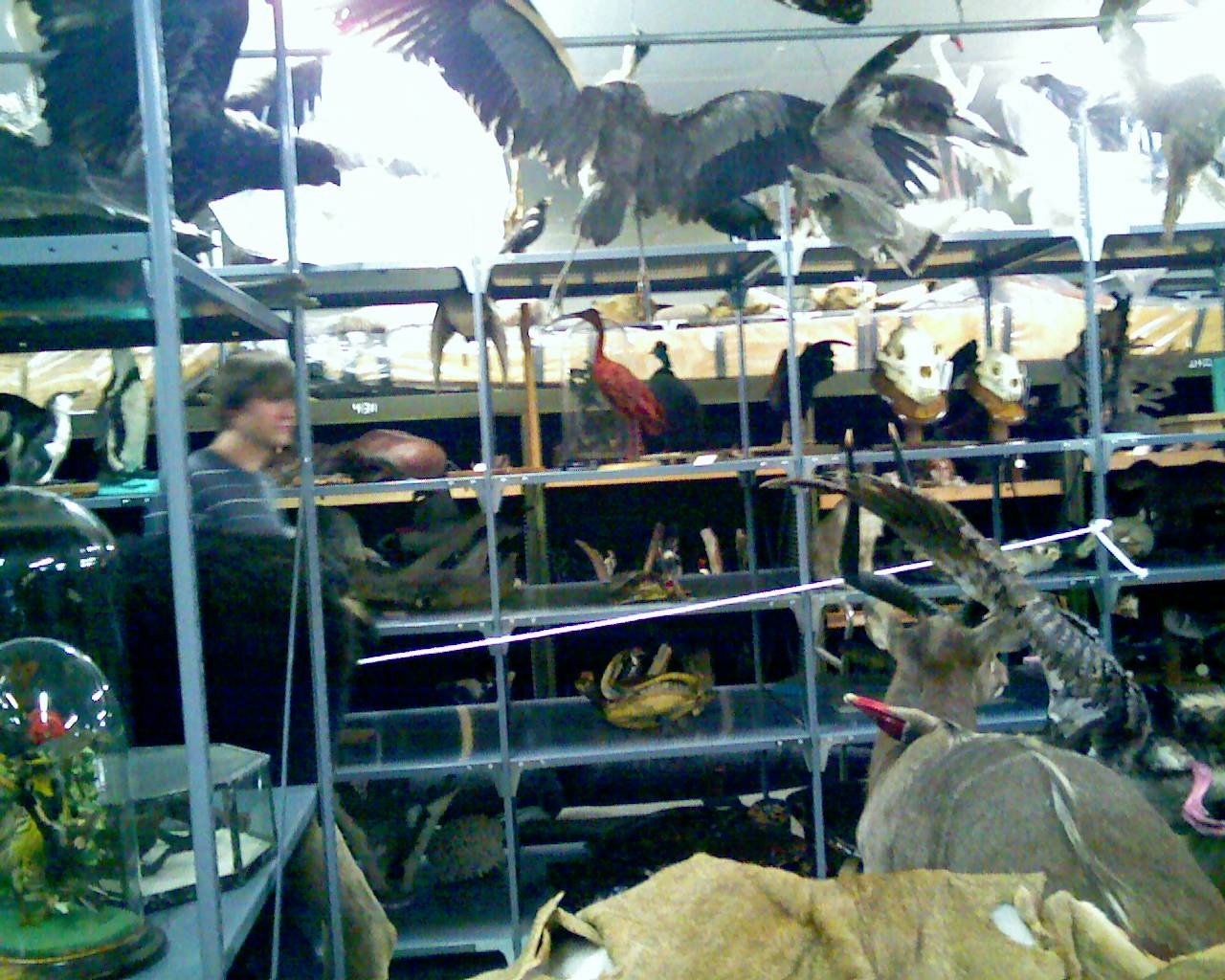 Off in a corner somewhere in this room is, for some reason, a boar shot by Nikita Khrushchev: 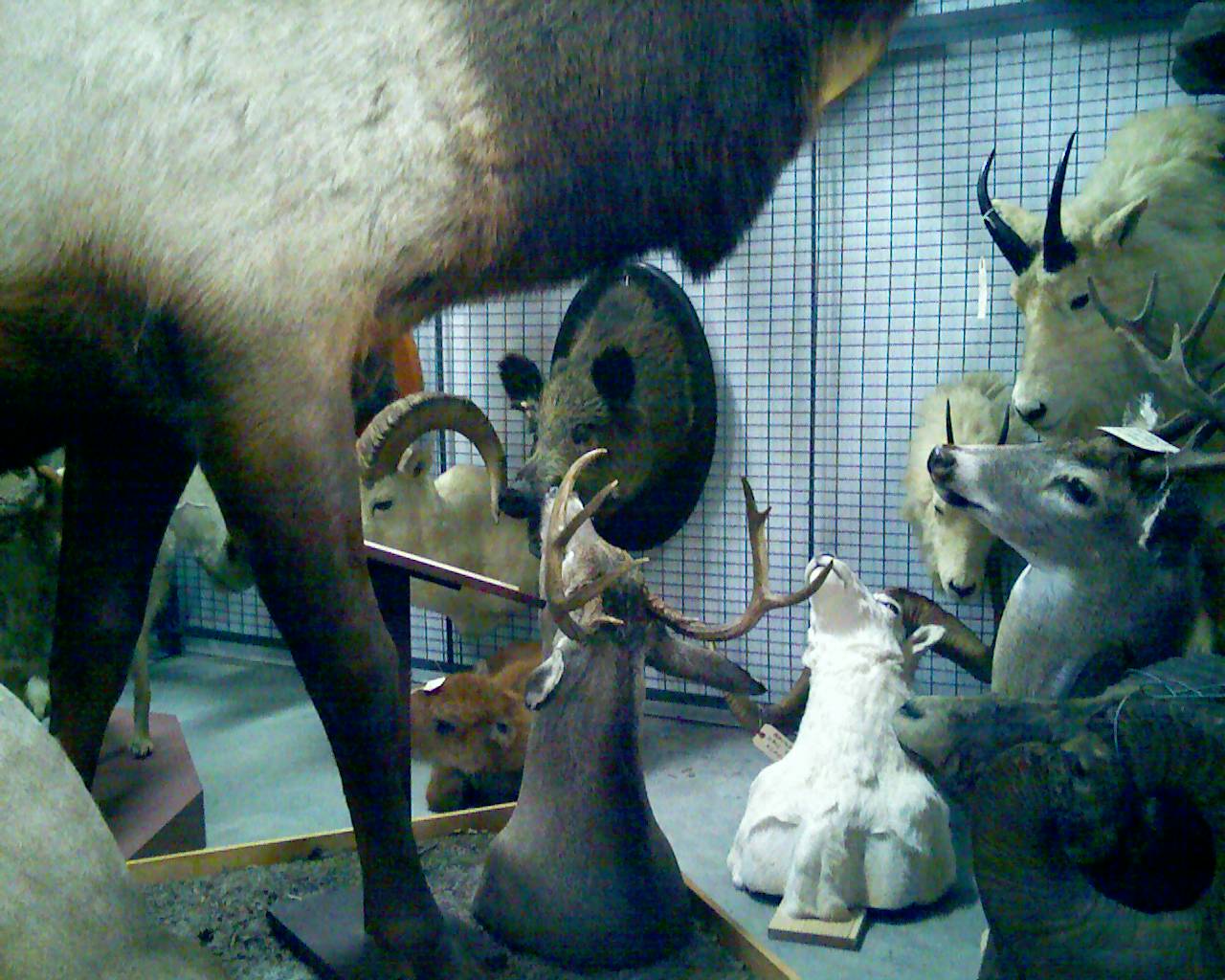 In addition to the storage area, we went to the area where the curatorial staff works on preserving and studying the animals.  There’s a huge human bone collection (which I don’t have pictures of).  In the zoological specimen area, we walked past this turtle, which I think gives a little hint of the difficulties that this work must involve: 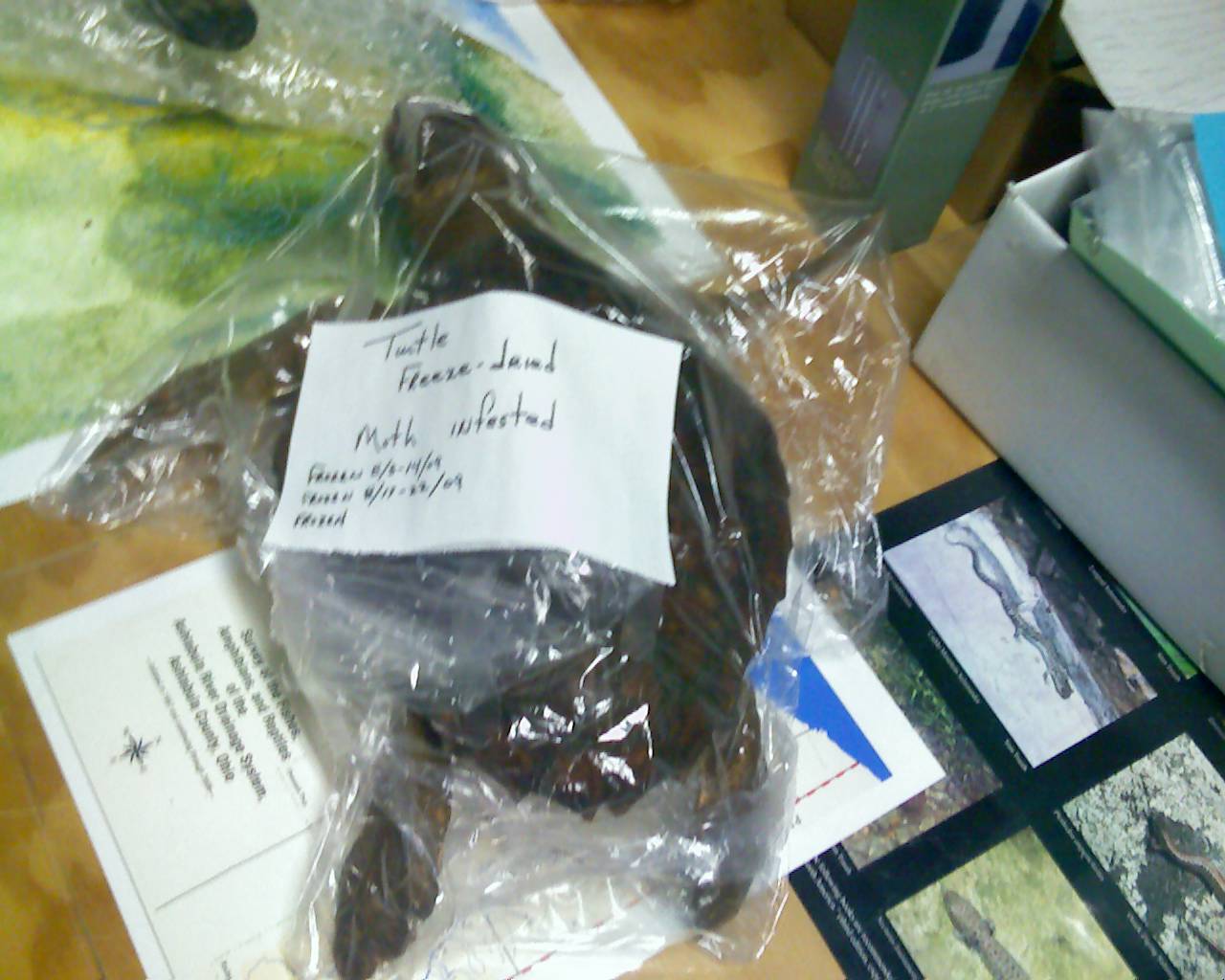 Some parts of the work I do are difficult, but I never have to deal with moth-infested turtles.

Nature’s got a pretty good rundown of how science fares in President Obama’s proposed budget.  NSF and NASA get substantial increases, and NASA’s supposed to drop plans to return people to the Moon.  Science in general does pretty well.  It looks like climate science is particularly well-represented, which is not terribly surprising and certainly seems to me like good news.

Of course the President’s budget is only a starting point for negotiations.  Who knows what’ll end up in the final budget.