There are sporadic bursts of handwringing about the declining number of students studying the humanities (literature, history, etc.). The latest burst was brought on by a report by the American Academy of Arts and Sciences. Verlyn Klinkenborg drew attention to it in a much-discussed Op-Ed in last Sunday’s New York Times.

Klinkenborg and others cite a bunch of reasons to worry about the state of the humanities, among them that “the number of students graduating in the humanities has fallen sharply.” Nate Silver, with characteristic astuteness, points out that the actual truth of this claim is a bit more complicated than you might think. It’s true that the fraction of all college students majoring in English (for example) has declined, but the fraction of all college-age people majoring in English has been much steadier: 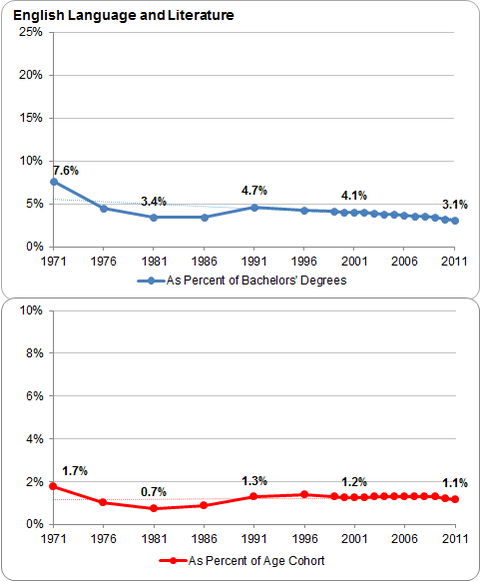 In fact, that pattern holds pretty consistently across a bunch of traditional academic disciplines (mathematics, natural science, and social sciences). The data seem to be telling a story like this: people who didn’t use to go to college at all are now going to college and majoring in things like criminal justice and business.

Needless to say, this doesn’t necessarily mean that everything’s fine. In particular, even if the fraction of people studying the humanities is about the same as it used to be, that doesn’t mean that the number is as large as it should be. But it does mean that it’s problematic to make an argument that there’s a problem based on the precipitous drop in the number of humanities students. Klinkenborg and others raise a number of other lines of argument besides the declining numbers of students. Those arguments are unaffected by Silver’s observation and are worth paying attention to.

For what it’s worth, I’m a pretty pro-humanities guy, at least for a scientist. I don’t know if the world needs more English majors, but I do think that it’s important for people, whatever their primary field of study, to spend at least some time seriously engaging with the humanities.

I hesitate to generalize too much from my own college experience, at the University of Chicago, but it is a school that emphasizes a broad and general course of study among all its undergraduates. My strategy was to choose a major – economics – that I expected to offer strong career prospects, but then to take as few courses in that field as required, diversifying my curriculum instead.

That’s got a lot in common with how I’d describe my own undergraduate education. I studied physics, not so much because of “strong career prospects,” but because I thought (and still think) that physics is awesome. But having decided to major in it, I then took the bare minimum number of physics courses, leaving room in my schedule for diverse interests, very much including the humanities (particularly classics, French, and philosophy).

I teach at a liberal-arts college, which espouses similar values as an institution, but our students haven’t necessarily embraced those values with enthusiasm. Our students tend to choose their courses that check off obvious “boxes.” If a course doesn’t fill a specific requirement or pad their resume in an obvious way, they don’t want to take it.

One last observation. A big part of Klinkenborg’s concern is that students aren’t learning how to write:

[Students] can assemble strings of jargon and generate clots of ventriloquistic syntax. They can meta-metastasize any thematic or ideological notion they happen upon. And they get good grades for doing just that. But as for writing clearly, simply, with attention and openness to their own thoughts and emotions and the world around them — no.

I agree with this diagnosis, but it seems to me that a big part of the cure is to improve the teaching of writing across all disciplines, not just in the humanities. In particular, we scientists could do a much better job of that than we traditionally have. There’s no particular reason that the job of teaching students to write should be foisted on the English department. All of us should share it. That’s one thing I like about my university’s first-year seminar program: it spreads the responsibility for giving students their first college-level writing-intensive course across many disciplines.

Knowing my interest in such things, my brother Andy pointed me toward an article in Science by Bradly Efron on Bayesian and frequentist statistical techniques. I think it’s behind a paywall, unfortunately.

Efron is obviously far more qualified to discuss this than I am — he’s a professor of statistics at Stanford, and I’ve never taken a single course in statistics. But, with the physicist’s trademark arrogance, I won’t let that stop me. As far as I can tell, much of what he says is muddled and incoherent.

Near the beginning, Efron gives a perfectly serviceable example of Bayesian inference:

A physicist couple I know learned, from sonograms, that they were due to be parents of twin boys. They wondered what the probability was that their twins would be identical rather than fraternal. There are two pieces of relevant evidence. One-third of twins are identical; on the other hand, identical twins are twice as likely to yield twin boy sonograms, because they are always same-sex, whereas the likelihood of fraternal twins being same-sex is 50:50. Putting this together, Bayes’ rule correctly concludes that the two pieces balance out, and that the odds of the twins being identical are even.

So far so good. Then, a couple of paragraphs later:

Bayes’ 1763 paper was an impeccable exercise in probability theory. The trouble and the subsequent busts came from overenthusiastic application of the theorem in the absence of genuine prior information, with Pierre-Simon Laplace as a prime violator. Suppose that in the twins example we lacked the prior knowledge that one-third of twins are identical. Laplace would have assumed a uniform distribution between zero and one for the unknown prior probability of identical twins, yielding 2/3 rather than 1/2 as the answer to the physicists’ question. In modern parlance, Laplace would be trying to assign an “uninformative prior” or “objective prior”, one having only neutral effects on the output of Bayes’ rule. Whether or not this can be done legitimately has fueled the 250-year controversy.

I have no idea whether Efron’s description of what Laplace would have thought is correct (and, I suspect, neither does Efron). But assuming it is, is the reasoning correct? Everybody agrees that, given the assumed prior, Bayes’s rule gives the correct recipe for calculating the final probability. The question is whether imaginary-Laplace used the right prior.

That question is, unfortunately, unanswerable without mind-reading. The correct prior for imaginary-Laplace to use is, unsurprisingly, the one that accurately reflected his prior beliefs. If imaginary-Laplace believed, before looking at the sonogram, that all possible values for the probability were equally likely — that is, if he would have been equally unsurprised by a divine revelation of the true value, whatever value was revealed — then the result is correct. If, on the other hand, he believed, based on his prior life experience, that some values of the probability were more likely than others — say, he’d encountered a lot more fraternal than identical twins in his life — then he would have been wrong to use a uniform prior.

The conclusion imaginary-Laplace comes to depends on what he thought before. Many people who dislike Bayesian statistics state that fact as if it were a problem, but it’s not. New evidence allows you to update your previous beliefs. Unless that evidence tells you things with logical certainty, that’s all it does. If you expect more than that, you’re asking your data to do something it just can’t do.

Efron claims that the traditional, non-Bayesian approach to statistics, known as “frequentism,” has the advantage that it “does away with prior distributions entirely,” with a resulting “gain in scientific objectivity.” This is true, I guess, but at a cost: Frequentism simply refuses to answer questions about the probability of hypotheses. To be specific, suppose that you went back to those expectant physicists and told them that they were only allowed to use frequentist reasoning and could not take into account their prior knowledge. You then asked them, based on the sonogram results, about the probability that their twins were identical. Frequentism flatly refuses to answer this question.

What this means in practice is that frequentism refuses to answer any actually interesting questions. Want to know whether the physicists at the LHC have found the Higgs boson? Don’t ask a frequentist. If he’s honest, he’ll admit that his methods can’t answer that question. All a frequentist can tell you is the probability that, if the Higgs boson has a certain set of properties, then the LHC folks would have gotten the data they did. What’s the probability that the Higgs actually has those properties? A frequentist can’t say.

The situation can be summarized in a Venn diagram:

One might naively have supposed that this would generally be regarded as a problem.

This makes the advice with which Efron concludes his article particularly silly: in the absence of strong prior information, he says,

Bayesian calculations cannot be uncritically accepted and should be checked by other methods, which usually means frequentistically.

This is meaningless. The Bayesian questions that depend on the prior are precisely those that frequentism refuses to address. If you don’t like Bayesian methods, your only choice is to decide that you’re not interested in the questions those methods answer. It’s a mystery to me how scientists make themselves go to work in the morning while believing that it’s impossible for their data to tell them anything about scientific hypotheses, but apparently many do.

(Actually, I’m pretty sure I do know how they do it: even the frequentist scientists are actually closet Bayesians. They cheerfully use the data to update their mental tally of how likely various hypotheses about the world are to be true, based on their prior beliefs.)

In the last part of the article, Efron advocates for an approach he seems to have developed called “Empirical Bayes.” I find the details confusing, but the claim is that, in some situations involving large data sets, “we can effectively estimate the relevant prior from the data itself.” As a matter of logic, this is of course nonsense. By definition, the prior is stuff you thought before you looked at the data. I think that what he means is that, in some situations involving large data sets, the evidence from the data is very sharply peaked, so that the conclusions you draw don’t depend much at all on the prior. That’s certainly true in some circumstances (and has been well known to all practitioners of Bayesian statistics forever).