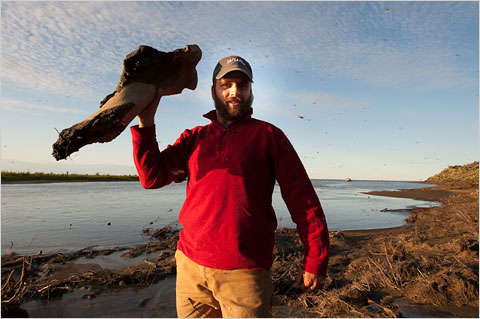 My brother Andy has a guest post on Andrew Revkin’s blog at the NY Times.  There’s  an audio slide show narrated by Andy as well.  Check it out.

News release from the American Society of Hematology about my father:

Past ASH president H. Franklin Bunn, MD, of the Brigham and Women's Hospital in Boston, will be presented with the Wallace H. Coulter Award for Lifetime Achievement in Hematology, which was established in 2007. This award, named for Wallace Henry Coulter, a prolific inventor who made important contributions to hematology and to ASH, is bestowed on an individual who has demonstrated a lifetime commitment and made outstanding contributions to hematology, and who has made a significant impact on education, research, and/or practice. Dr. Bunn will receive the award for his leadership in advancing the field of hematology and hematology research for more than 40 years. Throughout his career, Dr. Bunn's research has represented only a part of his commitment to the field. He has served on many National Institutes of Health advisory groups and councils and as an Associate Editor of Blood, a reviewer and editor of publications about hemoglobin and hemoglobin disorders, and an author of two textbooks. Most importantly, he has been an inspiring teacher of hematology to medical students and a masterful mentor of fellows and junior faculty.

As everyone must know by now, today is the 40th anniversary of Neil Armstrong and Buzz Aldrin walking on the Moon.  This is a natural occasion for people like Tom Wolfe and many others to think about the future of human space flight.  So here’s one astrophysicist’s opinion.

Here are some bad reasons to send humans to Mars:

Bad reason 1. To do science.  Sending fragile human bodies to Mars (and then of course having to bring them back) is about the least cost-effective way imaginable to gain scientific data bout Mars.  Wolfe says

"Why not send robots?" is a common refrain. And once more it is the late Wernher von Braun who comes up with the rejoinder. One of the things he most enjoyed saying was that there is no computerized explorer in the world with more than a tiny fraction of the power of a chemical analog computer known as the human brain, which is easily reproduced by unskilled labor.

but, with all due respect to both Wolfe and von Braun, this is nonsense.  The point is that we don’t have to choose between sending robots and having human brains in charge: we can and do send robots that are controlled by humans on Earth.

Bad reason 2. To give us an alternative for when the Sun goes out.  Wolfe again:

It's been a long time, but I remember [von Braun] saying something like this: Here on Earth we live on a planet that is in orbit around the Sun. The Sun itself is a star that is on fire and will someday burn up, leaving our solar system uninhabitable. Therefore we must build a bridge to the stars, because as far as we know, we are the only sentient creatures in the entire universe. When do we start building that bridge to the stars? We begin as soon as we are able, and this is that time. We must not fail in this obligation we have to keep alive the only meaningful life we know of.

This sounds plausible at first, but the problem is that the time scales are all wrong.  This is a good argument for a policy that would ramp us up  interstellar travel on a time scale of a billion years or so, but it’s certainly not obvious that going to Mars now (on a time scale of 10 or 100 years) is the right strategy to reach that billion-year goal. On the contrary, we’re much more likely to reach that long-term goal by slowly developing as a species, improving our technology in a bunch of ways that we haven’t even thought of yet. It’s totally implausible that pouring a lot of resources into the specific narrow goal of sending a hunk of metal with a few humans in it to Mars is the most efficient way to further the needed slow, long-term development.

For many years now, Bob Park has been writing What’s New, a highly opinionated and often sarcastic weekly column about issues relating physics to society and public policy.  Here’s a bit from the latest:

WATER: IS H2O A FORMULA FOR ROCKET FUEL? Even as I write this, the Lunar Crater Observation and Sensing Satellite is getting itself aligned in a lunar polar orbit. Its job is to look into deep lunar craters for any sign of the frozen water that some are certain is hidden in the shadows. It would be very expensive water. I told NASA that I would be happy to leave my garden hose out and they could come by and take all the water they want. They weren't interested. They wanted water on the Moon, where they could use it to refuel rockets. “Is water rocket fuel,” I asked? “Hydrogen is a component of rocket fuel,” I was told. “You have to split the water.” “Doesn’t that take energy,” I asked? “Excuse me,” he said, “my cell phone is ringing.”

(As of this writing, the latest column is not up on the web site; it was sent by email on Friday.)

For those who’ve never seen the column, this is a pretty typical sample in both content and tone.  If you like this sort of thing, then this is the sort of thing you’ll like.

Anyway, I’ve heard this sort of thing before: if we find water on the Moon, we can separate the hydrogen and oxygen to make rocket fuel.  One would hope that any physics student — or indeed a decent middle-school science student — could see the problem here: to separate the molecules requires precisely as much energy as you get back when you burn them.  So what are you getting out of this?  That’s Park’s point.

I find it hard to believe that NASA would be stupid enough to make this elementary error (or perhaps I should say that they would be stupid in this particular way).  And as much as I enjoy Park’s column, he does have his axes to grind, so you have to read him skeptically.  I should add that most of the time, his biases are on the side of the (metaphorical, secular) angels: He seems to be primarily animated by hatred of ignorance, superstition, and pseudoscience.

Anyway, it turns out that when people talk about using water as rocket fuel, they’re envisioning a future in which we have good ways of producing energy, but those ways aren’t portable: think nuclear power plants or massive arrays of solar cells.  If we had a nuclear plant on the Moon, we could do electrolysis and generate lots of hydrogen for use as a rocket fuel, which would be a lot more practical than putting the nuclear plant on the rocket itself.

That idea may or may not be realistic, but it isn’t crazy and stupid in the manner Park implies. (On the other hand, what he wrote is much funnier and pithier than what I just wrote.  Life is full of tradeoffs.)

Our local public radio station aired a short interview with me about an NSF grant I was awarded recently.

I don’t know whether the interviewer is aware of what I wrote about a previous piece he did; I hope not.  Needless to say, I like the piece about me better.