It looks like the Pioneer anomaly may have been explained.

The Pioneer anomaly is the observed fact that Pioneer 10 and 11 are decelerating as they fly away from the Sun by an amount that is very, very slightly more than you’d expect from good old F = ma. The size of the anomaly is incredibly tiny — less than 10-9 m/s2. It seems incredible that such a small effect is even measurable, but over long times even very tiny effects add up. According to Wikipedia (I haven’t checked their numbers, but they’re always right about this sort of thing),

If the positions of the spacecraft are predicted one year in advance based on measured velocity and known forces (mostly gravity), they are actually found to be some 400 km closer to the sun at the end of the year.

That 400 km is due to the anomalous acceleration.

Some people hypothesized that this effect might be due to some new force, or to a deviation of the gravitational force from standard physics. The latter idea fits in with the idea, held by some physicists, that the phenomena of dark energy and (possibly) dark matter are actually signs that we don’t understand gravity.

But when an effect is so tiny, it’s very hard to be sure that there’s not some more mundane cause. The recent analysis, which is accepted for publication in Physical Review Letters, seems to point toward a mundane source.

The most plausible mundane explanation is that energy is being radiated away by the radioisotope thermal generators. That energy wouldn’t exert any net force on the craft if it were radiated equally in all directions, but if some of it is bouncing off of the craft (specifically, a big antenna), then there would be a net force.

As I understand it, the recent analysis shows that the acceleration is decaying away with time in the way you’d expect if this explanation is correct. Previous analyses had suggested the acceleration was constant in time, which was regarded as evidence against the mundane explanation.

I always thought it was pretty unlikely that the Pioneer anomaly was evidence of exotic new physics, so this doesn’t surprise me too much. It’d be nice if it were pointing us toward some revolutionary new theory, but such things don’t come along very often.

Pretty much every astronomy blogger is writing about the prospect of the James Webb Space Telescope being canceled. If you want to pick just one to read, this one‘s pretty good.

In particular, if you haven’t seen the video at the end, watch it.

The problems with JWST are real and significant, but I’m still strongly in favor of increasing the awesome.

In honor of the last Space Shuttle flight, the journal Science has a retrospective by Dan Charles (behind a paywall, I think) on the science achievements of the shuttle. People who’ve paid a lot of attention to science and the space program over the years will already know the main points, but it’s worth a read for those who haven’t. The most useful part is the timeline (also paywalled, I assume).

To tease out the scientific contributions of the shuttle, Science has grouped the program's 134 missions into five categories. (The sixth, and largest, category is those missions with little or no scientific activity.) By frequency, the exploration of microgravity leads the way, with a substantial amount of such research aboard 45 missions. In second place are major observations of Earth or the heavens (12 missions), followed by the launching of large scientific instruments (seven missions), repairs and upgrades to the Hubble telescope (five missions), and research on the effects of the external space environment (three missions).

All the instruments have led to stunning scientific advances€” but all could have been launched on crewless rockets.

The shuttle was a crazily overpriced way to do this science.

One thing the shuttle did do that couldn’t have been done with crewless rockets: service, repair, and upgrade Hubble. Economically, this still isn’t worth it: you’d be better off just building and launching a new telescope for the cost of the servicing missions. Charles notes a counterargument:

Critics of crewed space flight point out that NASA could have built and launched an entirely new space telescope for the price of the repair missions. But Grunsfeld says that's unrealistic; it would have taken longer to build and launch a second-generation Hubble, for one thing, and there's no guarantee the project would have been completed.

If I understand it correctly, this is a claim that, due to the irrational way we allocate funds, it would have been politically unfeasible to do the science in a more efficient way. That may be true, for all I know.

Other than the great observatories, the main impression I get from this piece is how little science has come out of the shuttle and the  international space station. Estimates of the cost of the ISS vary, but it’s at least $100 billion, and the cost of the shuttle program is something like $170 billion. There’s overlap in those two numbers — the first one includes the cost of shuttle flights to service the ISS — so you can’t just add them up. But anyway, it means that the combined cost of the programs is at least 60 times the cost to the US government of the Human Genome Project. For that kind of money, we should be opening up vast new scientific vistas, but they’re nowhere to be found.

Of course, all this says is that the shuttle and space station are failures when viewed as science projects. If we acknowledge that science is not and never has been the primary purpose of human space flight, then this isn’t the right yardstick to use in measuring the programs’ success.

If not science, what is the point of the human space flight program, then? The three I’ve heard people talk about are

I don’t buy the first two. What we’ve done for the past 40 years in human space flight is not exploration in any meaningful sense, and I see no evidence that it’s inspiring. I don’t have any knowledge that lets me evaluate the last one, but I’ve never seen any argument that persuades me that our relations with Russia (or anywhere else) are better than they otherwise would be, to the tune of hundreds of billions of dollars, because of the ISS.

The comic Abstruse Goose reacts with sadness to the end of the shuttle program: 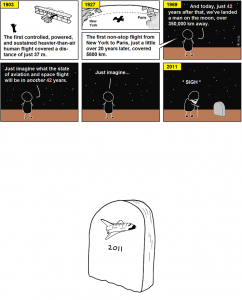 But the real sadness occurred at the beginning of the shuttle program, when we decided to put all our effort into shipping stuff back and forth to low-Earth orbit, so that we completely forgot how to do real exploration.