Only about two months late, I finally got around to reading the New York Times Education Life piece on the new MCAT (the test taken by applicants to US medical schools). Self-centered soul that I am, I’ve primarily paid attention to what’s happening to the physics content of the MCAT, not about what other new subjects are being added.

The short answer is social sciences, primarily psychology and sociology.

This may well be a good idea, although the primary reason for the change, according to the article, strikes me as bizarre:

In surveys, “the public had great confidence in doctors’ knowledge but much less in their bedside manner,” said Darrell G. Kirch, president of the association, in announcing the change. “The goal is to improve the medical admissions process to find the people who you and I would want as our doctors. Being a good doctor isn’t just about understanding science, it’s about understanding people.”

The adoption of the new test, which will be first administered in 2015, is part of a decade-long effort by medical educators to restore a bit of good old-fashioned healing and bedside patient skills into a profession that has come to be dominated by technology and laboratory testing.

A few other little things:

1. The article begins with an anecdote about a medical ethics class that had a sudden increase in enrollment due to students wanting to be ready for the new MCAT. But the new test doesn’t roll out until after these students will have taken the MCAT. Perhaps what the test really needs is an emphasis on arithmetic.

2. Some of the graphics in the article are truly atrocious. 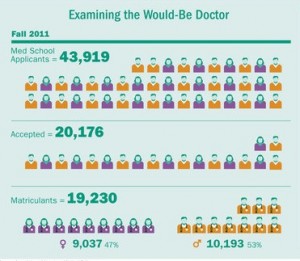 Presumably the point of this one is to tell you something about the gender balance at different stages of the application process. Without actually counting the little purple and orange folks, can you tell whether the percentage of women goes up or down at each stage?

Then there’s this one.

Again the point is presumably to show how the percentages of different groups change from the applicant pool to the accepted pool. Can you tell from this graph whether the green percentage went up or down? The magenta percentage? (Confession: I cropped out the legend, which listed the percentages, so in fact you’d know the answers if you saw the original graph. But if the only way to tell the interesting information is by reading the numbers from the legend, what’s the point of the pie chart?)

Also, because the wedges are different heights, the volumes aren’t proportional to the actual percentages. This is a classic how-to-lie-with-statistics problem.

These graphs aren’t quite perfectly designed to obscure the relevant information, but they’re close.

3 thoughts on “The new MCAT”