Apparently the Kepler Space Telescope has discovered a lot of candidate planets orbiting other stars, including many small “Earth-like” ones.  Kepler scientist Dimitar Sasselov showed this slide at a TED talk: 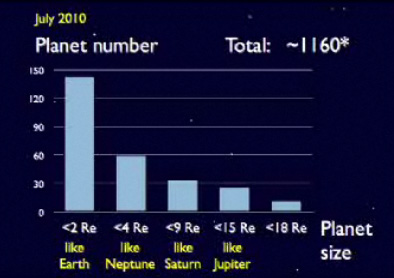 That’s a few hundred planets discovered, with over 100 of them “Earth-like,” meaning at most twice Earth’s radius.

The official data release hasn’t happened yet — in fact, the Kepler team has been asking for an extension of the proprietary period before the data are released publicly — so maybe Sasselov wasn’t supposed to reveal this information publicly yet.  Certainly this is an odd way for this information to come out.

At the moment, we don’t have all the details.  I think the hard part in this whole business is removing all the possible ways to get false positives. Kepler searches for variations in the brightness of stars due to planets transiting (passing between the star and us).  There are various non-planet reasons such brightness dips can occur, and it takes a lot of effort to rule out these other possibilities.  That’s the reason the researchers want more time before going public.  So I don’t think it’s clear yet how certain they are that these planet candidates are really planets, but presumably Sasselov wouldn’t have shown this in his talk if they didn’t have good reason to think that lots of them are.

My impression is that these results are pretty consistent with what people expected.  The original discoveries of extrasolar planets mostly found very large (Jupiter-like) ones, but that’s just because the method they used to search was only sensitive to large planets.  Once a mission like Kepler came along, with the ability to detect small planets, I think people expected to see lots of small planets.  But of course, expecting isn’t the same thing as knowing!

One thought on “Earth-like exoplanets”