In a discussion of David Hogg’s and my quixotic quest to convince people that it’s OK to think of the redshifts of distant galaxies as being due to the galaxies’ motion (that is, as a Doppler shift), Phillip Helbig writes

I think we all must agree on the following statement: Using the relativistic Doppler formula to calculate the velocity of an object at high redshift does not yield a meaningful answer in the the velocity so derived is not the temporal derivative of ANY distance used for other purposes in cosmology.

I replied to him in the comments, but I think that this point needs a longer response and might be of more general interest.

I agree with the beginning and end of Phillip’s statement, but not the middle.  To be precise, I agree that the velocity derived from the Doppler formula is not the derivative of a distance, but I don’t agree that that means it’s not a meaningful velocity.

That’s right: I’m saying a velocity is not necessarily the rate of change of a distance.  That sounds crazy: isn’t that the definition of velocity?

Well, sometimes.  But there are other times in astrophysics when a Doppler shift is measured, and nobody objects to calling the resulting quantity a velocity, even though that quantity is not the rate of change of a distance (or more generally of a position).  The clearest example I know of is a binary  star.

Here’s a cartoon spacetime diagram of an observation of a binary star. 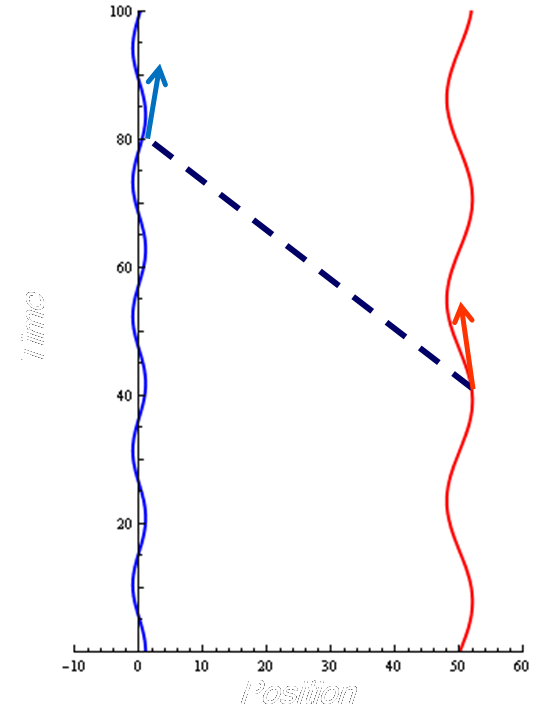 Time increases upward on this diagram.  The blue curve represents the Earth.  The curve wobbles back and forth as the Earth orbits the Sun.  The red curve represents a star, which is orbiting another star (not shown).  The dashed curve shows the path of a photon going from the star to the observer.

This is a situation that occurs all the time in astronomy.  The observer sees the photon (many photons, actually), measures a redshift, and calls the result the velocity of the star relative to us.

Now riddle me this: What is the position function x(t) such that this velocity is dx/dt?  For that matter, at what t should this derivative be evaluated?

If you insist on describing the measured velocity of the star as a dx/dt, here’s the best way I can think of to do it.  Define an inertial reference frame in which the Earth is at rest at the moment of observation.  Then the measured velocity is dx/dt, where (x,t) are the coordinates of the star in this frame, and the derivative is evaluated at the time of emission.  But this doesn’t meet Phillip’s criterion: the quantity x in this expression is not a “distance used for any other purpose.”  It’s certainly not in any sense the distance from the Earth to the star, for instance: at the time the derivative is evaluated, the Earth was nowhere near the right location for this to be true.