The Colorado River Years Ago

This  National Geographic site focuses on fresh water initiatives in hopes of preserving what’s left of the Earth’s freshwater. As we know, we roughly have about 0.3% of usable freshwater. Today, humans use water from the ground, rivers, and other freshwater streams to supply water to cities, farms, and factories. Rivers and other fresh bodies of water carve shipping routes around the globe, and supply us with food and recreation. However, these rivers and lakes are slowly becoming scarce. National Geographic focuses on the Colorado River which was once winding 1,470 miles (2.366 kilometers) from the Rocky Mountains to the Gulf of California’s Sea of Cortez back when it was plentiful. Nowadays, the water level barely reaches the full circle.

The biggest problem these fresh bodies of water face is the manipulation WE do to them. For instance, chemical fertilizers and animal waste sprouting from agricultural lands and residential areas which are swept into local streams, rivers, and other bodies of water. This type of surface runoff eventually lead to what we drink today and even the ocean. The result: polluted drinking water sources and the decline of aquatic species, in addition to coastal dead zones caused by these contaminants. Not to mention, the other dam initiatives which end up displacing thousands of people worldwide in hopes of obtaining and “keeping” more water.

Through this website, National Geographic suggests a way for us to reduce our water footprint with a pledge. So far, there have been 7,624 pledges and a total of 1,398,030 gallons of water pledged through this initiative.

Feel free to take the water footprint test to see if you are using more than the average person in the United States. We might believe that we use the most amount of water through flushing, but nearly 95 percent of our water footprint is hidden in the food we eat, energy we use, products we buy, and services we rely on (such as transportation). As a college student at UR, I am currently using 5% of your water footprint alone through everyday processes such as showers, laundry, etc. The average American relies on nearly 670 gallons of water a day just for electricity production in order to produce food. Why not take a look at how your local conservation efforts connects to the preservation of rivers and wetlands globally. Small changes can lead to big and effective changes for the future.

Click here for the TEST and see how much water you can save by changing your way of life:

Geology.com offers everything there is to know about geology and Earth sciences. Just take a look al the Categories list on the left side of the page and you will get a feeling of the enormity of this website. The website also offers state specific geological information and maps. The middle of the home page answers a bunch of important geographic questions, many that we covered in class. There is a current In the News section on the right hand side of the page. This website is a perfect way to study for the final! Take a look, but be careful not to get lost in Geology.com.

Want to make a volcanic eruption at home but don’t have baking soda, vinegar, or paper mache?

The Discovery Channel online has created an interactive website where visitors can not only use as a tool to broaden their geographic knowledge about the inner workings and facts of various types of volcanoes but, more excitingly, users can create and their own volcanoes! 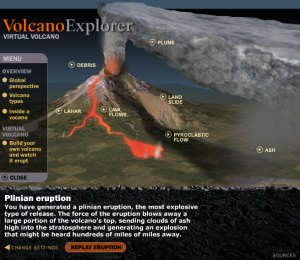 The fascinating and fun aspect of this site is that when you first enter the page you are directed to 4 links. The first three links include the Overview, covering Global Perspective, Volcano Types, and Inside a Volcano. The fourth link is, in my opinion, the most fun and insightful. This link will direct you to a Virtual Volcano where you, as a volcano explorer, can build your own volcano and then watch its impacts as it erupts. To build your volcano, you decide the viscosity of the magma and the extent of gas/pressure you want to launch it. Once you’ve set your conditions, watch your virtual volcano erupt!

The video first presents what kind of volcano you’ve created and then goes through all the effects that emerge as the volcano erupts. Furthermore, it labels the key aspects of the eruption and the user can also click on the aspects’ respective links to learn more about them and their effects.

For student geographers, this is a great site to discover more details about volcanoes from its creation, eruption, and after effects. Even better, it’s a lot of fun! 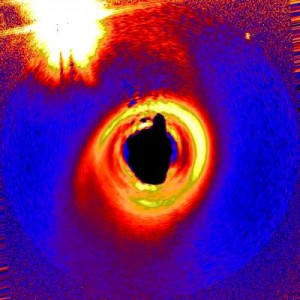 As a portion of NASA’s informative and educational program, the organization has created a website for the Hubble Telescope, featuring satellite images directly from the Hubble Telescope, as well as interactive demos that allow individuals to simulate solar system events. One specific interactive program is the black hole simulator, which is incredible. “Experiencing a Black Hole” … The introduction video provides users with an educational presentation of the formation of black holes, the issues associated with them and the methods we can undergo to comprehend them. Among the many facets of physical geography, I believe that the availability of information to understand the solar system is extremely critical. Only a few, privileged individuals have had the opportunity to directly experience space  and all of its phenomenons…with this website, individuals of all ages can come to understand the energy, time and process required to travel through space (and almost feel like you’re flying through space too!) The Black Hole simulation prompts users to consider all elements of space, ranging from the definitions of planets, stars and nebulae to estimating light years from earth and lightspeed required for travel. Since the solar system almost completely inaccessible for direct experiences, this website executes its mission of space education in an engaging manner.

Formed in 1957, The CBF has been recognizing the poor treatment of the bay and has been pushing for better treatment and care of the waters and the animal life in it.  They fight for bold and creative solutions to pollution across six states, the Chesapeake Bay Watershed, and speak to business, the government, as well as the public.  The CBF uses legal means when necessary to enforce already set laws and promotes education of environmental protection to those that wonder and have interest.

Growing up on the Bay I know how important it is to save the bay.  It is a beautiful area with an abundance of wildlife that feed off the rivers and environment both in the the Bay and the Watershed itself.  Conservation of the Bay is essential is keeping a thriving environment.  What have you done to help stop pollution of the Bay? 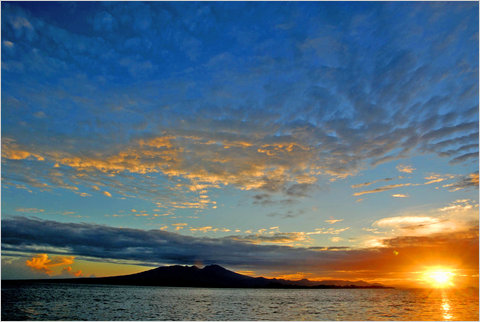 Featured in the New York Times is a seventeen page slide show titled Cloud Forests, Birds, and the Origins of Island Life.  Chris Filardi, a biologist at the American Museum of Natural history, traveled to the Solomon Islands in order to study evolution and conservation of the island’s species.  Solomon Islands is a sovereign state in Oceania, east of Papau New Guinea, that consists of nearly one thousand islands.  The slide show features bits and pieces of his photographs and field notes from the expedition.

“For biologists, islands have always been illuminating places. In part, this reflects both the relative simplicity of island ecosystems and also the richly unique, and sometimes bizarre, turns that life takes on islands – think parrots behaving like big rodents, massive dragonlike lizards and miniature hippos, giant flightless dodo birds and tiny ground-foraging bats.”

So, why not take a break from studying and take yourself on a trip to the Solomon Islands?

Created in 1980 through funding provided by the National Science Foundation, Long Term Ecological Research Sites are essential locations for ecological learning across the country. Growing up in Florida, I’ve always been extremely interested in the ecosystems of the Everglades. When I therefore found out about Florida Coastal Everglades long term ecological research in a place close to home, I immediately wanted to learn more- not only about what the scientists were studying and learning, but as well the impact of this knowledge on the greater geographic community. Research in the Everglades is focusing primarily on the interaction of saltwater and freshwater and the resulting ecosystems. Not only, though, do scientists study the impact of water type of Everglade ecosystems, they focus as well on the impact of changing climates and human interactions. Since it’s establishment in 2000, the LTER in the Everglades has finished its first stage of research, completed in 2006. Though phase I was primarily aimed at generating a basic understanding of the various Everglades ecosystems, phase II will focus primarily on the impact of changing freshwater chemistry on brackish water ecosystems. With an anticipated completion date of 2012, phase II of the Everglades research will provide essential information helping not only the area ecosystem, but similar ecosystems on a national scale as well. The website for this research project includes basic research information in addition to an interactive map depicting the spatial scale of research.