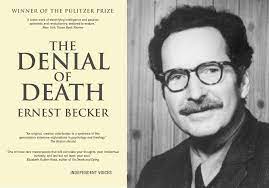 People often ask me why we have heroes. In an earlier essay, I describe the 12 functions of heroism – that’s one way to answer the question.

Another way is to go deeper. In psychology, to go deeper often means to get at issues that we may not be consciously aware of. Of all the scholars who have ever investigated heroism, the person with the deepest understanding of the causes of heroism was a cultural anthropologist named Ernest Becker.

Becker took a psychoanalytic approach toward understanding heroism, meaning that he focused on unconscious fears and wishes that drive our behavior. His 1973 award-winning book, The Denial of Death, is pure genius in describing the unconscious human need for heroism.

The “Ache of Cosmic Specialness”

Becker’s analysis begins with the observation that children’s narcissism can take the form of conventional self-esteem, but more often than not it morphs into a powerful drive to achieve “cosmic significance”. He defined cosmic significance as “the desire to stand out, to be the one in creation” (p. 3).

Becker also calls this need “man’s tragic destiny”, and we’ll get to the tragic part of it in a moment. This central calling for greatness refers to each person’s transcendent need to “desperately justify himself as an object of primary value in the universe; he must stand out, be a hero, make the biggest possible contribution to world life, show that he counts more than anything or anyone else” (p. 4).

And here we get to my favorite phrase that Becker uses. We may spend our lives looking for a better job, a better car, and a better roof over our heads, but “underneath throbs the ache of cosmic specialness” (p. 4, italics added). People literally “ache” to become something big and meaningful. They ache for heroism, in other words.

Becker believed that we look to accomplish heroic tasks because we are all too aware of the shortness of life and our inevitable death. According to Becker, “the hope and belief is that the things that man creates in society are of lasting worth and meaning, that they outlive or outshine death and decay, that man and his products count” (p. 5).

Becker argued that most of this heroic drive is buried in our unconscious, as it would be an “ache” or “a devastating release of truth” to be made aware of how much our mundane lives fall short of achieving cosmic specialness. In other words, it’s pretty painful for most of us to admit that we’ll never become famous or achieve the heroic status of a Gandhi or a Malala or a Martin Luther King, Jr.

Our societies – not to mention the laws of mathematics — are simply not designed to allow average people to become well above average. Thus, this unfulfilled “universal urge to heroism”, deeply imbedded in all of us, contributes to our anxiety and malaise. Joseph Campbell (1991) labeled the 20th century as The Age of Anxiety, referring to the negative emotional consequences of our inability to know how to live a heroic life.

Becker noted that a few select individuals are capable of achieving something that will live on after they die. The heroism of many superstar individuals, plastered daily over social media, cultivates a misleading sense that long-lasting heroism is attainable to us all. Most of us, however, cannot achieve a heroic level of accomplishment and fame. Our best efforts are destined for failure. Becker argued that we share the same chance of success in crafting a heroically memorable life as do insects and lower animals.

Because our efforts to become heroic are likely to fail, we concoct a mental illusion that what we do has some vast significance. Striving after an illusion puts us in an existential dilemma. What is the best illusion under which to live? The illusion must give us dignity and hope. Historically, religion has fulfilled this function, endowing humans with eternal meaning and a sense of cosmic purpose. But as Becker and others have pointed out, in modern times religious dogma has become increasingly more difficult for the majority of us to accept.

Becker makes the compelling case that as we grow older, we realize that the most we can do to obtain the feeling of significance is to become part of “a cog in a heroic machine” (p. 12). We can serve our country, volunteer at our church, or advance the political party of our choice. We can become part of some worthy mass movement, become activists, or support a social cause of the utmost importance.

In short, people in search of heroism are driven to attach themselves to something big, something they deem to be of supreme importance. We ride the coattails of a cause bigger than ourselves and, most importantly, we desperately want the cause to be successful and to outlive us. To further satisfy our call to heroism, we can mentally exaggerate the size of the small part we play in this larger heroic machine. In this way we delude ourselves into believing that we are participating in life meaningfully, even heroically.

Charismatic Leadership as the Ticket to Heroism — or Villainy

Thus Becker believed that for most people, the path of personal heroism was doomed to failure because “no person is strong enough to support the meaning of his life unaided by something outside him” (1969, p. 43, italics added). That outside force is often a conspicuous and charismatic leader promising to lead followers on a great cause.

Charismatic heroic leaders provide a mechanism for average people to become part of something beyond them that is big, packed with significance, and destined to outlive them. Unable to achieve personal heroism on their own, most people are vulnerable to what we might call the perfect storm of susceptibility to influence from powerful leaders. Feeling utterly unheroic on their own, the average person will soak up a charismatic leader’s message of collective heroism like a dry sponge. The more self-confident the leader in promising an association with a great heroic cause, the faster and higher people will jump at the chance to join this large social bandwagon that appears earmarked for greatness.

Few of us, according to Becker, are consciously aware that we have this “ache of cosmic specialness” and that our lives are driven by this “universal call to heroism”. But it’s good to know so that we aren’t easily duped by charismatic leaders promising us either greatness or a return to greatness. The wrong leaders can use our drive for heroism to achieve their villainous aims.