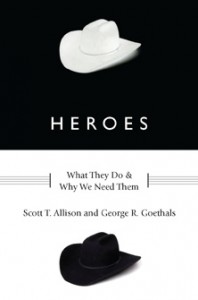 We’ve published a number of books on heroism and leadership. They include:

Heroes: What They Do and Why We Need Them

Handbook of Heroism and Heroic Leadership

Here’s what the experts are saying about the first book, Heroes: What They Do and Why We Need Them:

“Heroes and villains are outliers on the bell curve of humanity, Good and Evil the basic dialectic of human nature. These fascinating processes are brilliantly illuminated in this well-crafted exposition that takes its readers on a captivating journey.”
— PHILIP ZIMBARDO, Professor Emeritus of Psychology, Stanford University, President of the Heroic Imagination Project, and author of The Lucifer Effect and The Time Paradox

“Who are our heroes, who are our villains and why?  Through a skilled interweaving of fascinating examples, relevant research, and crucial conceptual distinctions, Scott Allison and George Goethals answer these questions for our time.”

“Allison and Goethals have done a masterful job leading the reader through the complex labyrinth of leaders and followers, heroes and villains, and even the nature of evil. The book is both erudite and entertaining. The have used familiar heroes from fiction, popular culture, and everyday life to make important points come alive while remaining true to the empirical research literature across many areas. This is a book that may be destined to cross the line from scientific analysis to best seller.”

“By conjoining deep insights from psychology, history and the arts, Allison and Goethals have tendered a unique analysis of heroism€”and have succeeded wonderfully.”

“In this outstanding book, Scott Allison and Al Goethals probe beneath the surface of heroes and heroism. What kinds of people are recognized as heroes? What motivates them to take actions that most others are unable or unwilling to take? Allison and Goethals answer these questions with a rich analysis that draws from a wide range of scientific and historical sources.”

“George Goethals and Scott Allison, two of the world’s preeminent social psychologists, have combined their considerable talents to produce a tour de force analysis of heroes and heroism.  This book is a scholarly triumph, a heroic intellectual achievement, and one that will both inform and inspire contemporary debate and understanding of this important but neglected topic.” 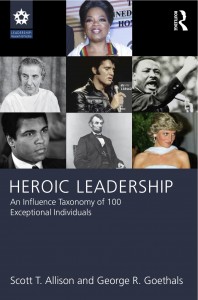 Our second heroes book is entitled Heroic Leadership: An Influence Taxonomy of 100 Exceptional Individuals, published by Routledge in 2013.  In Heroic Leadership, we review the relationship between leadership and heroism, showing how our most cherished heroes are also our most transforming leaders.  We also describe in some detail a conceptual framework for differentiating among the many varieties of heroism.  The book profiles many different individual heroes and provides an analysis of their heroic contributions.

Here’s what several distinguished reviewers have said about Heroic Leadership:

“A pioneering and insightful examination of the intersection of heroes and leaders by two gifted psychologists.  Allison and Goethals’ captivating narrative  adds a new dimension to current research on leadership.”
— JAMES MacGREGOR BURNS, Pulitzer Prize winning Professor Emeritus at Williams College and Distinguished Leadership Scholar at the James MacGregor Burns Academy of Leadership of the School of Public Policy at the University of Maryland.

“Allison and Goethals’ stimulating and incisive survey of one-hundred influential leaders could not be more cogent or timely.  When so many of our leaders seem to have feet of clay and principles that bend with the prevailing breezes, they remind us of those leaders who rose to the occasion and stood firm in their moment of decision. As a result, they and their leadership have stood the test of time.  Heroic Leadership offers a refreshingly original and provocative perspective on what it means to be a great leader. Reading this book not only informs us, it also inspires!  My only suggestion would be that we expand their list to 102 — adding their names in appreciation of their heroic scholarly labors!” — RODERICK KRAMER, Professor of Organizational Behavior, Stanford University

“Scott Allison and  George Goethals are pioneering scholars exploring the psychology of heroism and leadership, and this book outlines their contention that while all heroes are leaders, the converse is not true. They make their case by offering snapshots of 100 characters, some fictional (e.g., King Lear), some collective (e.g., Chilean miners, Power Rangers), and some surprising (e.g., Lady Gaga, Meryl Streep) who instantiate their taxonomy of heroes. For researchers and lay people alike, this book is packed with fascinating insights into the psychology of leadership, heroism, and mere celebrity. It is a book to be enjoyed by everyone who wonders why some people attract public attention, and others, who may deserve it (e.g., parents, soldiers, teachers) do not.”  — DAVID MESSICK, Professor Emeritus at Northwestern University

“Presenting vivid accounts of distinguishable forms of heroism, this is a welcome contribution to understanding heroic aspects of leader-follower relations. It deserves a place as a text, reference source, and feast of revealing narratives. The accounts chosen capture what individuals’ special qualities underlie and activate others’ sense of the “heroic,” based on five factors affecting a leader’s influence. This yields ten types of heroes that are profiled, from trending and transitory to transforming and transcendent. Among those receiving attention in this cavalcade are the tragic, (Oedipus, Tiger Woods, Richard Nixon), and many shown as the “moral,” (e.g., The Dalai Lama, Mother Teresa, Rosa Parks). Insightful analyses of individual cases provide an illuminating blend of scientific scrutiny with compelling storytelling.” — EDWIN HOLLANDER, Professor Emeritus, CUNY, Baruch College, and University Graduate Center