Scott has published over 100 articles and books, including:

(1) Heroes, What They Do & Why We Need Them, published in 2011 by Oxford University Press

(2) Heroic Leadership: A Taxonomy of 100 Exceptional Individuals, published by Routledge in 2013.

(3) Conceptions of Leadership: Enduring Ideas and Emerging Insights, published by Palgrave Macmillan in 2014.

(4) Reel Heroes and Villains, published by Agile Writer in 2015.

(5) Frontiers in Spiritual Leadership: Discovering the Better Angels of Our Nature, published by Palgrave Macmillan in 2016.

(6) The Handbook of Heroism and Heroic Leadership, published by Routledge in 2017.

(7) Heroic Humility, published by the American Psychological Association in 2018.

Scott Allison’s work has been featured in media outlets such as National Public Radio, USA Today, the New York Times, the Los Angeles Times, Slate Magazine, MSNBC, CBS, Psychology Today and the Christian Science Monitor.  He is the recipient of the University of Richmond’s Distinguished Educator Award and the Virginia Council of Higher Education’s Outstanding Faculty Award.

George (“Al”) Goethals holds the E.Claiborne Robins Distinguished Professorship in Leadership Studies at the University of Richmond.  Previously he taught at Williams College where he was Chair of the Department of Psychology, founding Chair of the Program in Leadership Studies, Acting Dean of the Faculty, and Provost.  Goethals graduated with a BA from Harvard College and holds a PhD in social psychology from Duke University.

Goethals explores leadership from psychological and historical perspectives.  With Georgia Sorenson and James MacGregor Burns he edited the Encyclopedia of Leadership (Sage, 2004), with Sorenson, The Quest for a General Theory of Leadership (Elgar, 2006), and with Crystal Hoyt and Donelson Forsyth, Leadership at The Crossroads, Psychology and Leadership (Praeger, 2008).  His most recent book is called Presidential Leadership and African-Americans.

With Scott Allison, he is author of several books and articles, including  Heroes, What They Do & Why We Need Them, published in 2011 by Oxford University Press, and “Making Heroes:  The Construction of Competence, Courage and Virtue” published in 2012 in Advances in Experimental Social Psychology, Volume 46.

Here is more information about Scott Allison and George Goethals. 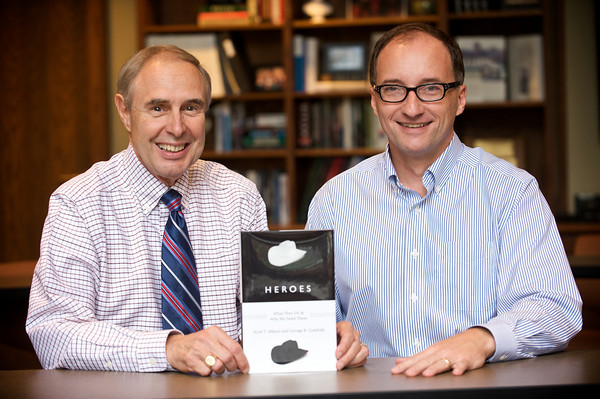