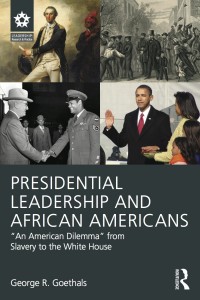 In this book, George Goethals  traces the leadership affecting African Americans of eight US Presidents, from George Washington through Lyndon B. Johnson.  In addition to chapters on each of these men, the volume includes an Introduction and a concluding chapter that considers progress during the past 50 years.  The overall arc of the story begins with slavery and ends with the election of an African American president.

The lives and leadership of individual presidents is considered within two important contexts.  The first is the evolution of the United States, starting as a collection of thirteen separate colonies joining together in 1775 to fight a war against England, and eventually becoming the world’s leading economic and military power.  A second is the evolution of the role and status of African Americans in the United States from slavery to emancipation, through Reconstruction and Jim Crow, to civil rights and voting rights, through affirmative action and to the White House.

But the focus is on the evolving psychology that underlies the attitudes and actions of men who served as US president throughout America’s history of constitutional government.  How did their backgrounds as well as the challenges they faced as presidents shape their values, attitudes, moral development, judgment and, ultimately, their decisions?  We see that historic, economic, and cultural evolutions affect both the lives of African Americans and the nature of presidential leadership.  We see that specific events and politics combine in influencing each president’s attitudes and actions toward blacks.  And we see that the contributions and actions of African Americans alter economic, military, and cultural developments, and, ultimately, presidential leadership.

The life histories and the administrations of the eight presidents we consider both shape and are shaped by Americans of African descent.  While the story highlights the leadership of these chief executives, it also emphasizes the agency of African Americans, some well- known, some never to be known.  These include figures such as Frederick Douglass, Booker T. Washington, W. E. B. DuBois, A. Philip Randolph, Rosa Parks, and Martin Luther King, Jr.  They also include unnamed escaping slaves and as well as fighters in America’s battles from Bunker Hill in 1775 to the present day in the Middle East.

In appraising the personalities, policies, and initiatives of these selected American presidents, the book situates their lives and administrations within the political and cultural context of their times.  The actions of all of them, and the credit or blame we attribute to them, have to be understood within these parameters.  In each case, the historical and situational forces that shape their values, priorities, and ultimately, their actions are highly relevant.  In evaluating their leadership we often overlook these contextual influences.  One goal of this book is to weigh them more fairly.

Presidential Leadership and African Americans is published by Routledge and is now available for purchase.