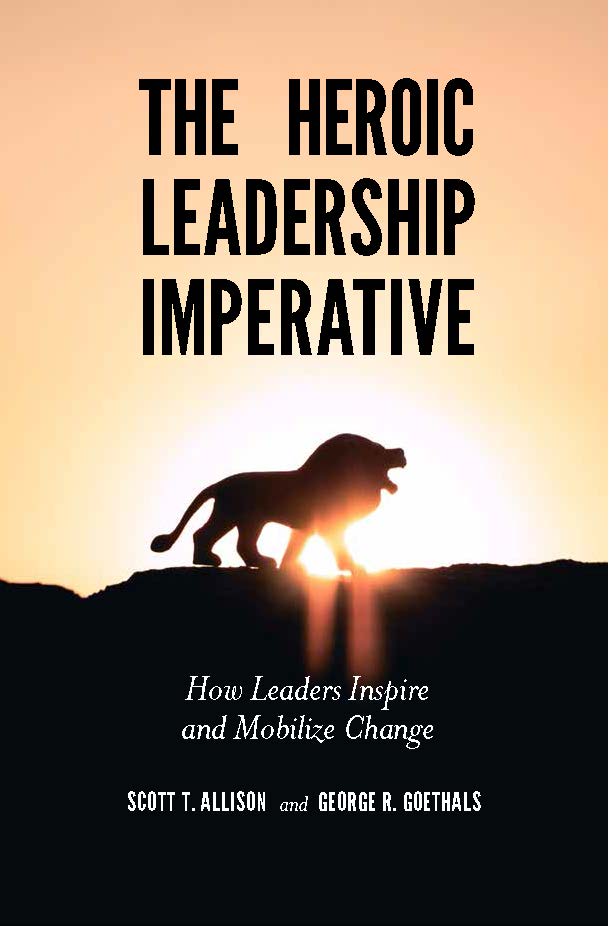 Our next book describes a new principle that we call the heroic leadership imperative. We show how leaders who fulfill the imperative will inspire followers and initiate social change.

The imperative consists of the leader meeting individual, collective, and transcendent needs of followers. We describe examples of leaders, both good and evil, who have succeeded in meeting all three categories of needs, leaders such as Abraham Lincoln, Donald Trump, Martin Luther King, Jr., and cult leaders such as Jim Jones.

Imperative 1. The first level of the leadership imperative focuses on the necessity of leaders meeting the individual needs of followers. Successful leaders ensure the provision of lower-level Maslowian needs in the hierarchy, such as food, water, safety, and security. Heroic leadership also appeals to higher level individual needs involving esteem, compassion, and social unity.

Imperative 3. Finally, we show how the third level of the leadership imperative operates, with leaders fulfilling the transcendent needs of followers. Humanity’s most powerful leaders have been able to gain power by making followers feel they are part of something bigger, more mysterious, and packed with cosmological significance. Leaders such Martin Luther King, Jr., and Abraham Lincoln were gifted in tapping into followers’ transcendent desires.

Here is an excerpt from the Preface of the book:

“The word imperative has always fascinated us. It suggests that something — some vital course of action — must be undertaken. Where there is an imperative, there is an urgency, a call, a mandate. Merriam-Webster’s dictionary defines imperative as “an obligatory act or duty.” The idea of a heroic imperative was first described by our friend and colleague Olivia Efthimiou, who argued that our well-being is a “personal and collective heroic imperative” (Efthimiou et al. 2018, p. 15).

“The imperative in this instance refers to the necessity of engaging in heroic practices aimed at promoting our well-being as individuals and as members of our communities. We dare not avoid the hero’s journey that calls us, heals us, and transforms us into our best selves. Nor do we dare sidestep the necessary practices of self-care that fuel the heroic journeys of the larger collectives to which we belong. Efthimiou et al. concluded with an intriguing thought: Perhaps both heroism and well-being are both best “understood as a means to and ends of wholeness” (p. 15). Please keep that word “wholeness” in mind as you read this book.

“In this current volume, we use the term imperative to describe another aspect of heroism, namely, the phenomenon of heroic leadership. It is our contention that any leader who aspires to change the world has the “obligatory duty” to satisfy three types of needs of followers. The first type of follower needs, which we call individual-level needs, refers to the needs of every distinct human being, ranging from basic needs such as food and water to higher-level needs such as esteem, love, and – you guessed it – “wholeness”.

“Whereas Efthimiou and her colleagues focused on everyday laypeople’s heroic well-being as an imperative, we argue in this book that it the imperative of heroic leaders to move and mobilize followers by taking steps to meet a set of very specific needs of followers. Notice that we’re not necessarily saying that it is the imperative of heroic leaders to ensure the well-being of followers. One might think that “meeting needs” and “ensuring well-being” go hand-in-hand, but it turns out that meeting needs and promoting well-being are independent goals.

“Consider Adolf Hitler in the 1930s. During this decade, he moved and mobilized his followers by meeting their important psychological needs of belongingness, individual self-esteem, and national pride. But we would never say that Adolf Hitler was the architect of his country’s well-being. Achieving “wholeness” was hardly the goal of the Third Reich. Wholeness is a state of utmost well-being in which all the parts within an individual or within a society are integrated. Hitler’s Final Solution was the antithesis of wholeness and well-being. The Fuhrer met some key needs of German citizens while actually poisoning their individual and collective well-being.

“From these considerations, it is important to keep in mind that when we speak of leaders who aspire to transform and mobilize followers, we could be referring to a heroic leader such as Martin Luther King, Jr., or villainous leaders such as Jim Jones, Adolf Hitler, or Kim Jong-un. Although the term “heroic leadership” appears in the title of this book, we know that history has taught us that many of history’s most egregious villains have also sought to move followers and change the world.

“And yes, those villainous leaders have the same imperative of meeting the three types of needs of followers if they wish to achieve their evil aims. The title of this book contains the phrase “heroic leadership imperative” because we prefer to focus on the positive application of these three secrets of game-changing leadership. The world desperately needs heroic leaders who answer their call to both meet followers’ needs and promote their well-being. As we will demonstrate in this book, wholeness may be the key. It is a central human need, identified decades ago by Carl Jung (1951) and by humanists such as Abraham Maslow (1954). Wholeness, we argue, may occupy the hub of well-being for individuals and groups, and thus is pivotal to understanding the heroic leadership imperative.”

The Heroic Leadership Imperative can be ordered from Amazon right now by clicking here.