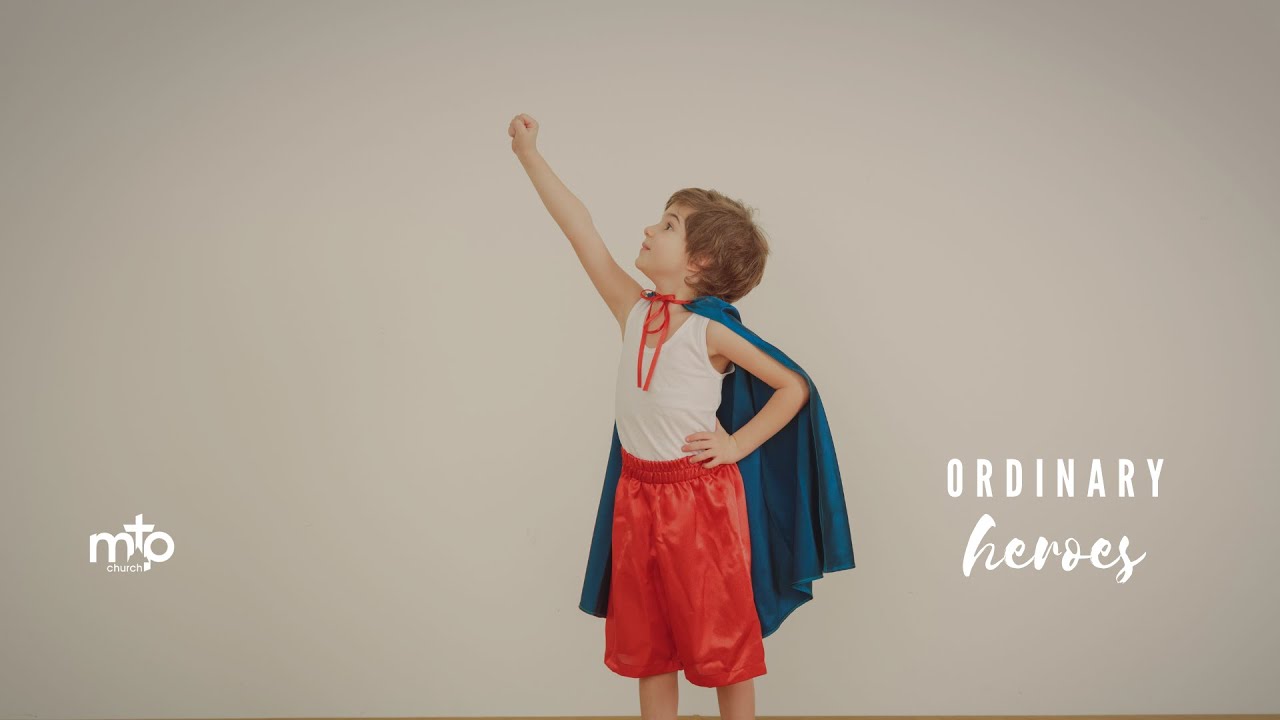 When we think about heroism we tend to immediately think about the fanfare – noble knights raising their swords in the fight for freedom and justice, defeating evil sorcerers, Batman and Superman, courageous defenders fighting crime and saving the day, individuals performing extraordinary acts.

What’s so wrong about that? Nothing – and everything. Much attention is now being paid to the heights humans can achieve and the best of human nature. This is indeed a welcome and much-needed change, and heroism is in many ways leading the fold in this new wave of thinking.

I have to make clear from the outset that I am a staunch supporter and believer of the value of heroism for humanity – it is my conviction, in fact, that heroism is the evolutionary and genetic basis of all life on this planet, and the universe itself. I have no doubt that one day (and long after I am gone in all likelihood) scientists will discover this heroic basis of life.

But this does not mean that I do not recognise the challenges that come with it. This may be an unusual and bold statement but – I believe that approaching the study of heroism with what German philosopher Theodor W. Adorno called “negative dialectics”, or beginning to understand the costs of the pursuit of a heroic life, and indeed the costs of not taking up this pursuit, is the only true pathway to realise the spread of heroism widely. It is in our darkest times that we truly need heroism – and it is in those times that its reality seems most impossible.

So what is the ‘problem’ with heroism? It is most commonly a romanticised or idealised notion. The hero is overwhelmingly seen as a symbol of triumph, overcoming the odds against him or her for some victorious end result. They defeat evil and order is restored in the world. A ‘superhero’ quality.

But reality is not as clear-cut. The burden and scars the hero can be left with as a result of what they have learnt and the trials they have undergone may leave them dispirited, calling for even greater amounts of courage to deal with the outcome of the journey. At other times there is no clear triumph as the journey might mean having to live with pain, as in the case of post-traumatic stress disorder, injuries or brain damage.

In the case of self-sacrifice and altruism, yes, a noble act was done, but to the cost of the life of the heroic individual, and perhaps for those left behind. Will the fact that a mother or a father gave up their life for a ‘greater good’ make it any easier on a child that is left parentless, while the surviving partner struggles to fend for their family?

Psychologists Zeno Franco and Philip Zimbardo (2006, p. 31) speak of the “subtleties” of 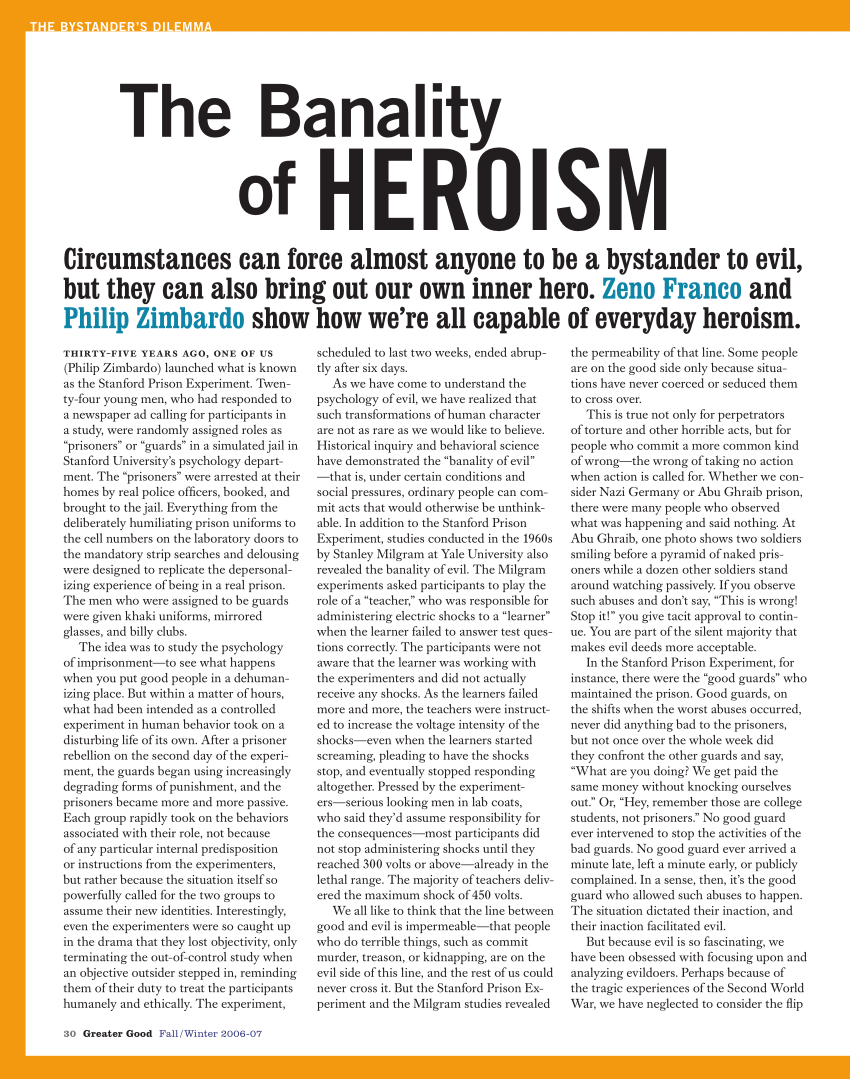 heroism that have been lost. The common conception of heroism, which is more of an exaggerated, overemphasised ideal, is juxtaposed against ‘ordinary’ reality. An ordinary wo/man who as a result of a single noble act or acts of bravery (usually in sequence) rises to the status of hero or superhuman, sealed into this realm therein.

But if we speak of the “banality of heroism” as Franco and Zimbardo (2006) do, and if as I propose heroism is innate and in-built into human and non-human organisms as an evolutionary imperative, both realities are in fact merged. They are not separate but live in tandem with each other everyday, constantly ‘speaking’ to each other.

Every organism’s life is arguably a composition/equation of intermittent acts of heroism to varying degrees, most often seamlessly blurring into reality, even though it might be the case that some (overwhelmingly the minority) become defined by what is culturally perceived as a great act of heroism. This is particularly applicable to the case of the anti-hero in popular texts, i.e. somebody deemed unlikely to be noble or brave, or perceived as ‘evil’ or ‘immoral’, redeemed by a single noble act (perhaps of self-sacrifice at the end of their life).

Again, this produces a ‘black and white’ view of reality, not accounting for its complexity. As Franco and Zimbardo (2006) suggest we are all, under the right conditions, capable of both evil (as demonstrated in the Stanford Prison experiment) and heroism. It is most accurate to describe the life of a human as a combination of both, whether they are conscious of it or not.

Daily acts of reaching outside our comfort zone can be regarded as heroic – we are creatures of habit and comfort. But we are also curious creatures, with an innate thirst for imagining the impossible. An act of doing something that feels uncomfortable, however small, taps into this inborn adventurous spirit, bringing us closer to our innate heroic nature. It is these small subtleties that are indeed becoming lost in all the celebratory fanfare of ‘superheroes’ and celebrity culture.

Heroism in the Ordinary

True heroism is likely to be a quiet, subtle thing, like a whisper in the dark that you can barely sense. But it is there. So let us begin to celebrate the small, the subtle, the unseen. For it is there that our true treasure lies. Like the Holy Grail or cup of Christ in Indiana Jones and the Last Crusade (1989) – it is not an obvious flamboyant choice, it is old and worn, and you would just as easily pass it by. But it is real.

And then there is the assumption of this model that once hero status is achieved, that defines one as a ‘moral’ ‘noble’ character for the rest of their lifespan – that the journey is somehow a self-complete and enclosed process. This renders a hero frozen in time, a narrow account of their larger life story leading to the idealisation of the individual and their ascent to god-like status, as per the definition of ‘hero’ – is this realistic? If the lifespan of an organism is a series of hero journeys comprised of sequences of suffering, whether complete or incomplete, hero status is not a fixed state but rather fluid and indeed retractable – there is a fine line between courage and frailty. 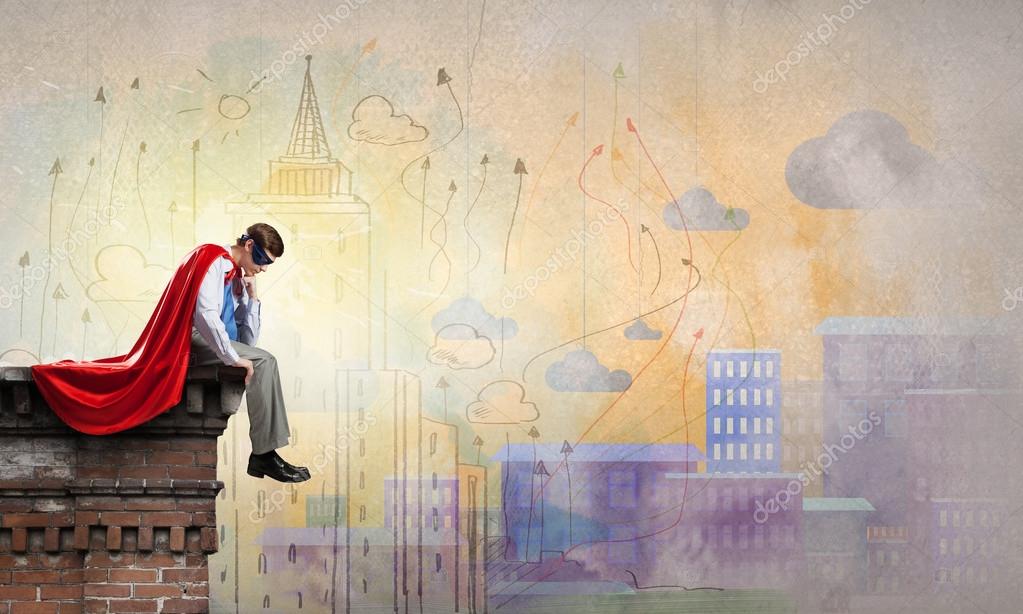 much more complex view of the role of heroism, always part of a dynamic complex interrelationship between a variety of determinants, making the opportunities for both evolution and regression endless. A significant point to make is that regression, contrary to traditional thought, is in fact conducive to and a determinant of evolution, if we take varying degrees of suffering as indispensable to heroism, and heroism as instrumental to evolution.

Introducing the concept of banality by no means denigrates the centrality of heroism in day to day life. If anything it escalates it, paving the way for a system where everyone is a hero. We need to go way deeper in an analysis of heroism – and we will be forever limited in such an attempt if we are to not look outside of the assumed boundaries of its concept, which has been limited to the humanities for far too long.

Acknowledging the value of heroism means acknowledging the value of journey and story, both our own and of others. We must begin to respect story as science, as episteme (from its Ancient Greek derivation), or as deep knowing – and knowledge as a journey itself – and dispel one-dimensional views of individuals, groups and the cosmos, recognising them for the rich tapestries that they are.

I believe that this type of science can provide answers to the enduring presence of heroism, which is arguably one of the few constants of not only the history of humans but the universe itself. I believe we will also constantly fail to fully comprehend heroism’s functions if we continue to look at it as a ‘higher’ ‘superior’ state of humanity (and indeed by not looking outside humanity), but rather as something innate and firmly embedded within life and physiology itself.

I believe that rather than thinking of heroism as something ‘out there’, a magical quality associated with a ‘mythical’ past that left us, it has always been there. We just need to open our eyes to it in new ways. In describing this work as merely an initial attempt, Franco and Zimbardo (2006, p. 33) themselves emphasise that “at best, it allows us to propose a few speculations that warrant further investigation [emphasis added]”.

Behind every crisis, there is a hero. Behind every life that shatters, there is the opportunity to put it back together. Behind every problem, lies its solution. The ‘problem’ of heroism, is not a problem per se. Nor is the heroic state untenable. It is a gift bestowed to all of us, which, if left unrealised, becomes a curse and the root of our Pandora’s box. Sometimes the cost is simply too high – so why be heroic? Because as the fictional character of Peter Parker says in the end of Spider-Man 3, “Whatever comes our way, whatever battle we have raging inside us, we always have a choice.

My friend Harry taught me that. He chose to be the best of himself. It’s the choices that make us who we are, and we could always choose to do what’s right.” 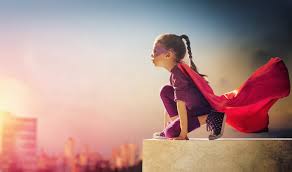 And most of the time it is not about good or bad choices, but choices that were simply not good enough. Those are the ones that make the most impact in a world where heroism is banal.

A fellow heroism science researcher mentioned to me recently that we might need a new word in place of ‘hero’ given its problematic nature. Maybe we do – and that would be an easier path to take, that would appease those who still smirk at what they see as the unrealistic thought of creating everyday heroes.

It is the very ‘problem’ of heroism that makes it all the more worthwhile – it is the road less travelled, and that is always a noble effort. Maybe what we need is to follow the hard path of changing those opinions and pre-conceptions of the term ‘hero’. Radically altering those simplistic immediate associations and thought patterns into something deeply complex, innate and intimately interwoven with our bodies, hearts and minds is the hard road ahead.

But it will be worth it – more so than we can appreciate with our limited minds. Perhaps the real question is not whether there is validity in a new path and approach to the age-old question of heroism, but rather: how far does the rabbit hole go?