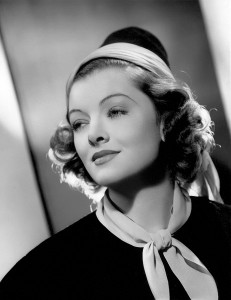 Many actors are known for the heroic exploits of their fictional alter egos, but far fewer deserve to be called heroes in their own right. Myrna Loy is best remembered for her role as Nora Charles, the wry better half of William Powell’s Nick Charles, whom she portrayed in six Thin Man films from 1934 to 1947. In these films, Loy never failed to help bring the murderer to justice and prevent further loss of life. In real life, her acts of heroism were more subtle, yet more profound and lasting.

Born in 1905 in Montana, Myrna Loy came to southern California with her mother following the death of her father when she was 13. Here she studied dance, posed for photographers and sculptors, and was soon performing in local stage productions. A job as a dancer in Grauman’s Egyptian Theater led to her first roles as exotic femme fatales in several silent films throughout the 1920s. But it was in 1934, at the age of 29, that she landed the role of Nora Charles, making her one of the biggest stars in Hollywood and earning her the nickname “The Queen of Hollywood.”

Loy put her fame and wealth to good use. A strong opponent of racism, she lobbied against discrimination in Hollywood. “Why does every black person in the movies have to play a servant?” she asked studio executives when she was at MGM. “How about a black person walking up the steps of a courthouse carrying a briefcase?” This was in 1934, during the Great Depression and three decades before the Civil Rights Era. 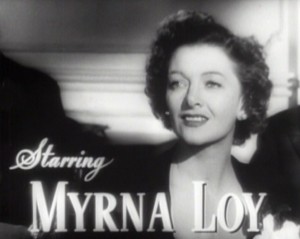 Later, she worked as co-chair of the Advisory Council of the National Committee Against Discrimination in Housing.

When World War II broke out in Europe in 1939, she went to work raising money for the Red Cross and War Relief. With the bombing of Pearl Harbor in 1941, she went to work full time for the war effort, going on fund-raising tours (in full uniform) and working at a Naval Auxiliary Canteen run by Bundles for Bluejackets. As the war continued, she moved to New York and toured military hospitals throughout the east, visiting wounded and crippled soldiers and organizing shows to raise their spirits. Her outspoken statements against the Nazis earned her a spot on Hitler’s blacklist.

After the war, she faced the threat of another blacklist because of her progressive views — this time because of the rising tide of McCarthyism and the Communist Witch Hunt. As a response to the forming of the House Un-American Activities Committee, Loy helped create the Committee For The First Amendment. Also in the post-war years, she went to work for the American Association For The United Nations and as a delegate for UNESCO (the United Nations Educational, Cultural and Scientific Organization).

In her roles as strong, intelligent and sexually liberated women in films such as The Thin Man, Topaze and The Barbarian, Myrna Loy epitomized the “New Woman” feminism that began in the 1920s. Her progressive views on racial and gender equality foreshadowed the dramatic social changes of the following generation. Her dedication and patriotism in the face of war, as well as her courage and moral fiber in the face of ominous developments on the home front, brought comfort and hope to many. In both fact and fiction, Myrna Loy was a heroic force to be reckoned with.

9 thoughts on “Myrna Loy: Hero On and Off Screen”