The following blog post finished 2nd in our recent contest for a free autographed copy of our Heroes book.  Each week we have been posting a hero profile from the top 5.  Next week we will post the winning entry.  Congratulations to all five of these excellent submissions.  — Scott Allison and George Goethals

Batman is one of the world's most famous and beloved superheroes, and he is also one of the most unusual.  Appearing in comics, television, and major motion pictures, Batman hides behind the identity of Bruce Wayne, a playboy billionaire and industrial tycoon.  As a child, Wayne witnessed the murder of both his parents and vowed to avenge their deaths by fighting crime.  Undergoing a quest for both physical and mental excellence, Wayne transformed himself into the dark hooded and caped Batman.  Batman's transformation into a hero is as unique as it is purely self-motivated.

Unlike Spiderman, who was bitten by a radioactive spider, or Superman who was secretly an alien from another planet, Batman is a regular human being whose personal drive and rigorous mental and physical conditioning allow him to achieve superhero power.  Batman's foremost qualities include wealth, physical strength, intelligence, and obsessive passion for justice.  Void of fantasy circumstances or characteristics, Batman is a hero worthy of our admiration, inspiration, and identification; he is a man at his greatest.  As quoted in the 2005 film Batman Begins, "If you make yourself more then just a man, if you devote yourself to an ideal, then you become something else entirely."

In addition to his exceptional strength and intelligence, Batman is a superhero because of his unwavering moral compass.  Batman lives in the fictional American town of Gotham city, a metropolis plagued by crime, greed, and corruption.  Within Gotham, Batman fights crime by combating menacing criminals such as the Joker, Two-Face, Catwoman, and the Penguin.  More importantly, however, Batman fights crime by standing as a symbol of hope for ordinary citizens 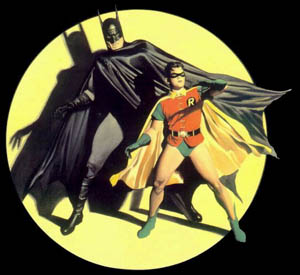 who need not show fear in the face of danger.  As noted by Joseph Campbell in his classic book A Hero with a Thousand Faces, individuals who refuse their call to adventure or heroism do so out of fear.  As an ordinary man who chooses to step up and fight crime, Batman overcomes this fear at an individual level, and his example encourages other members of society to do the same.  As a superhero, Batman continues to be as unique as he is a very mysterious figure.

Often referred to as a masked vigilantly, Batman is frightening and intimidating in the manner befitting a villain.  Batman is accused of being a criminal himself by the citizens of Gotham because he is not afraid to break the law in minor ways to achieve a higher goal.  As depicted in the film The Dark Knight, Batman also allows himself to be hated by the society he serves.  Foregoing all self-aggrandizement, Batman does not look for the love and admiration given most super heroes.  Instead he claims that by not being a hero he can be something more.  Living like an outcast, Batman is the €˜Watchful Protector', a benevolent godlike force looking out for society.

Unconcerned with glory or recognition, Batman is purely motivated to bestow a boon on his fellow man.  Batman believes society is capable of justice and this motivates him to fight crime. When Gotham is overrun with corruption and greed, Batman still sees the potential for good in people and refuses to let society consume itself.  Ideally, society sees the good in the hero, but with Batman, he sees the good in society.  Batman symbolizes a hero's most important role:  the ability to believe in others when they have stopped believing in themselves, and the faith to inspire them for change.

Below is the trailer for the last Batman movie The Dark Knight (2008):