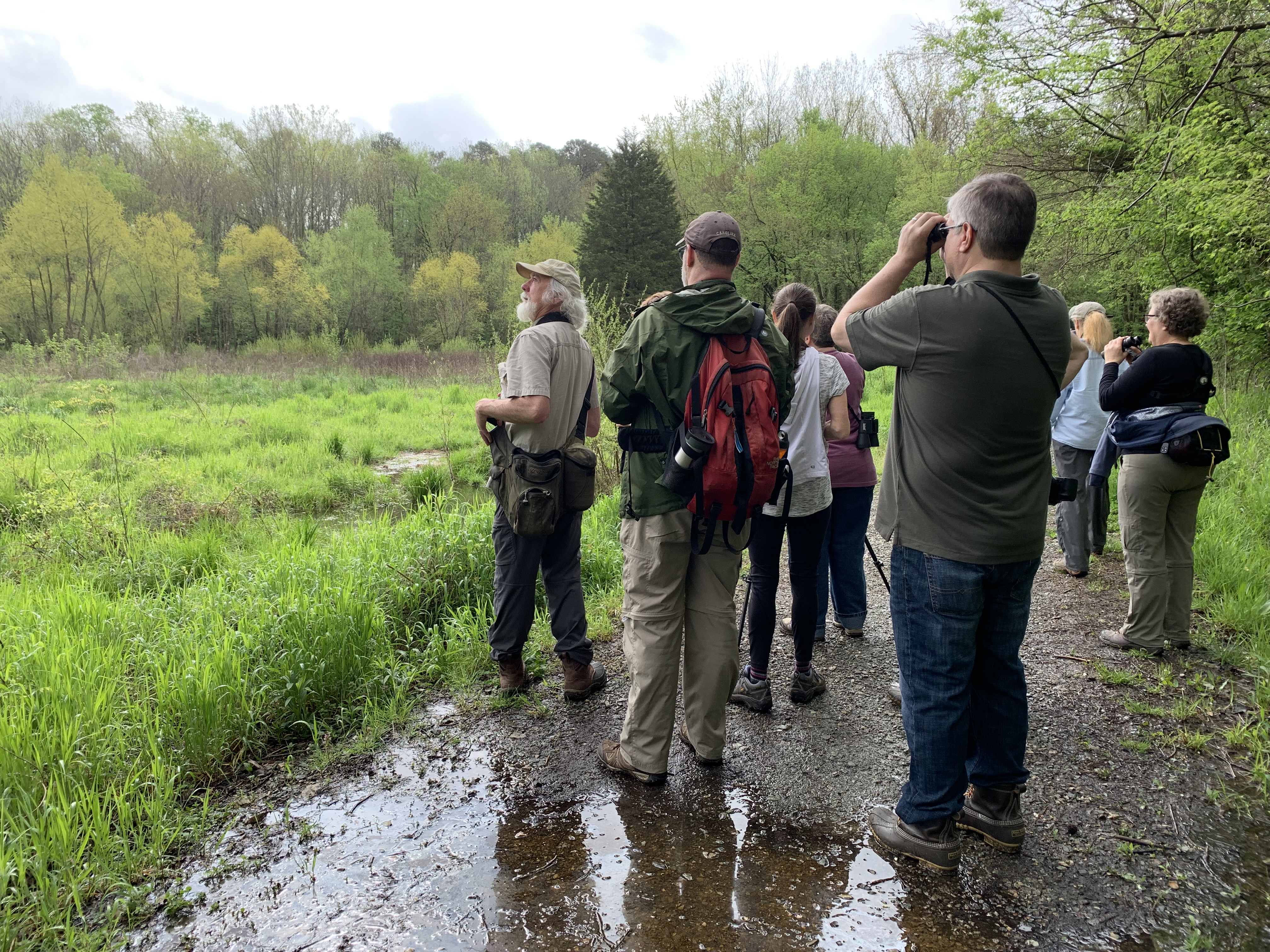 Paul Bedell (left) and other Richmond birdwatchers at Pony Pasture, a park along the James River. (Photo by Caroline Robelen)

Central Park in Manhattan is a magnet for migrating birds, a green oasis in the middle of a concrete desert.

For birds passing through Richmond during their migration, the James River is their Central Park, explains Lewis Barnett, a local birder and computer science professor at the University of Richmond. The river, which has a forested buffer on either side amid areas of heavy development, is perfect for migrating birds. “When the sun comes up and they decide they need to set down for a rest and fuel and that sort of thing, that’s the area that’s going to look attractive to them,” Barnett said. Richmond’s location on the fall line, between the Piedmont and Coastal Plain regions, also makes it a hotspot for birding. “Richmond is kind of a sweet spot in my mind. You get sort of a combination of species from the two different ecoregions,” Barnett said. 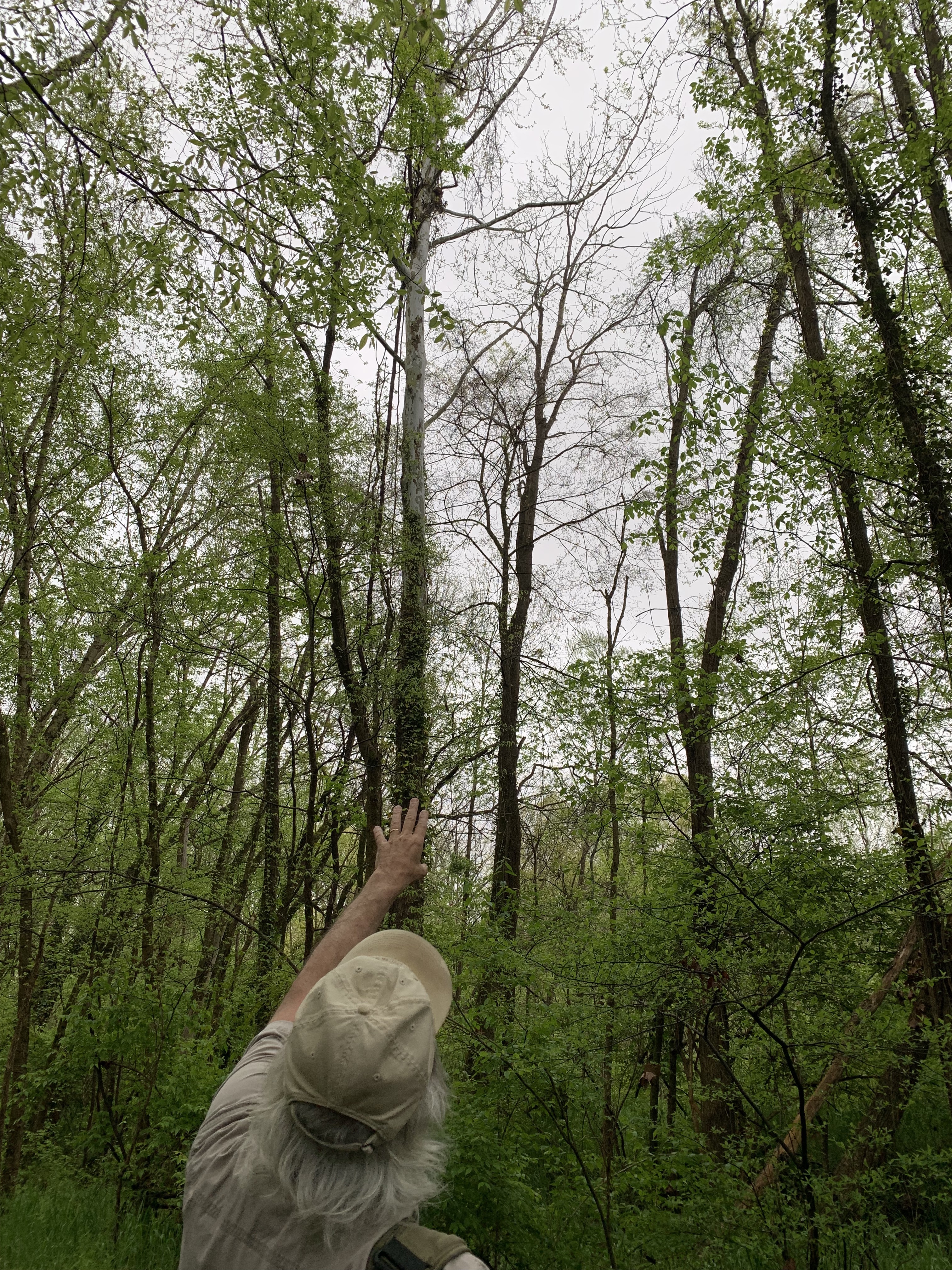 Paul Bedell pointing out a bird hidden in the trees at Pony Pasture. (Photo by Caroline Robelen)

On a foggy morning in April, I went out on a birding field trip with Barnett that was led by another local birder, Paul Bedell, at Pony Pasture, a park on the James River.

“I find birds by hearing them, so we’ll try to keep the conversation down to a dull roar,” Bedell said as he and the group set off on the muddy trails. This important skill takes time to develop, especially because birders don’t have much time to the learn the calls of migrating birds that may only be in the area for two or three weeks.

“I didn’t even start trying for 10 years after I started birdwatching,” Barnett said. He used a set of CDs with the calls of birds of eastern North America, and would listen to them in his car. This type of practice is helpful, but to Barnett, the key is listening in the field. “Getting the visual of the bird singing really is the thing that in the end cements it in your brain,” Barnett said.

Bedell, quiet and thoughtful, has been birding since he was a child in Nebraska, where he was fascinated by the migration of sandhill cranes. As we walked, my untrained ears heard a cacophony of calls, none of which seemed particularly distinct, but immediately Bedell and the other birders quickly began to name what they heard.

“White-throated sparrow,” Bedell muttered, bringing his binoculars to his eyes.

“Blue-headed vireo,” someone else said excitedly.

The birders, a large group of mostly older men and women, were a quippy bunch.

“Ah, binoculars – the subtle marker of a birder with a bird,” one man said when the entire group had trained their binoculars on a set of trees, trying to catch a glimpse of a yellow-throated warbler. 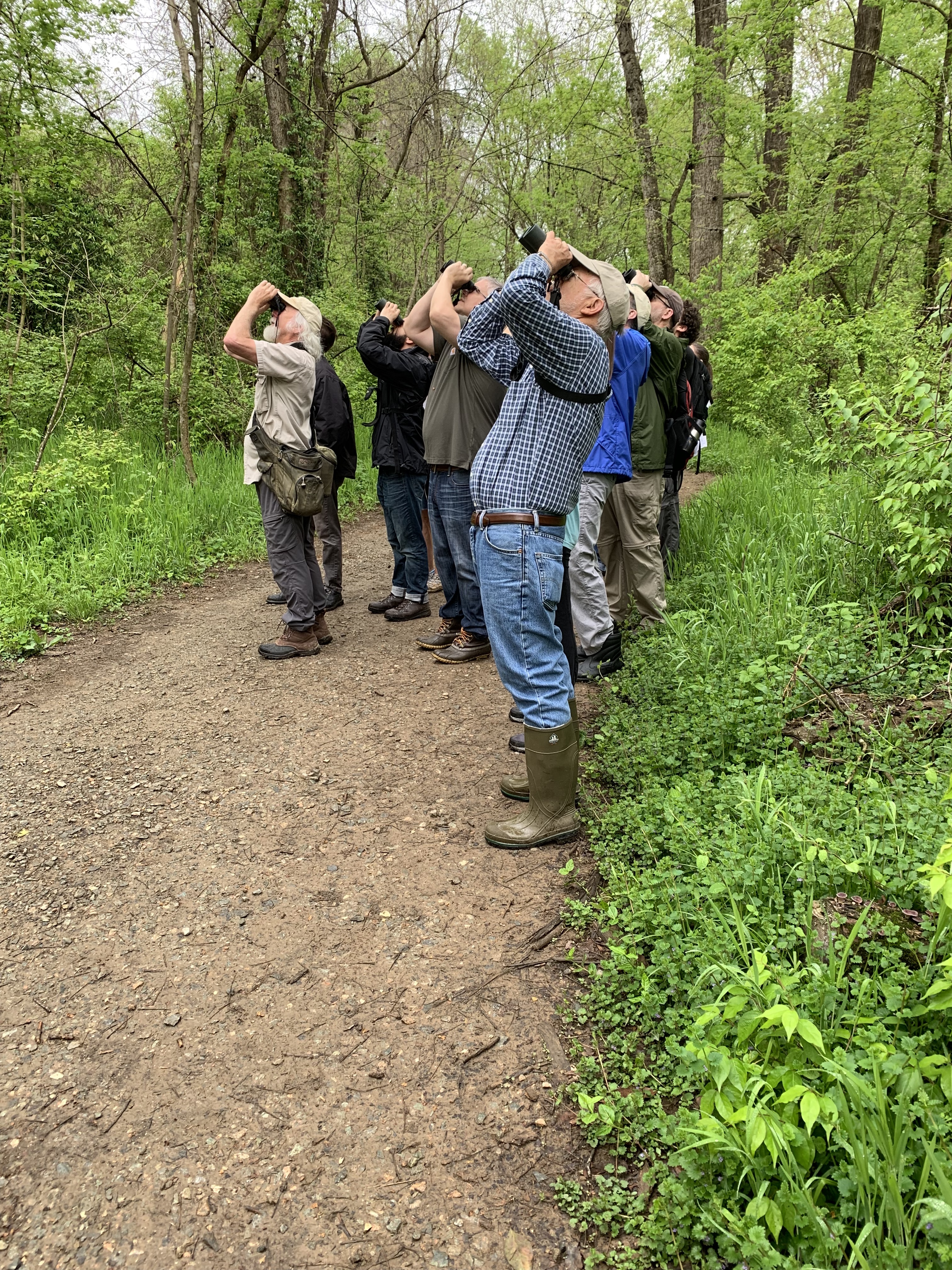 Paul Bedell (left) and other birdwatchers catching a glimpse of a migrant bird at Pony Pasture. (Photo by Caroline Robelen)

“Tree rat,” another man mumbled grouchily when a squirrel shimmied up one of the trees and scared the bird away. At times, the chatter was overwhelming. “Sometimes it’s good to be solitary,” Barnett said, before adding that alternatively, it can sometimes be “better to have more eyes.”

Without binoculars, it was difficult for me to see the birds, many of which were quite small. But eventually, I caught a glimpse of a pileated woodpecker, a larger bird with a prominent red crest. There was a subtle thrill to transition from simply hearing the drumming on the tree to seeing a living creature, finally connecting the auditory to the visual.

Later in our walk, the birders got particularly excited after someone spotted a barred owl perched high in a tree. Immediately, someone thrust a pair of binoculars in my hand and helped me get the owl into focus. The combination of its mottled brown and white feathers and large dark eyes was breathtaking. For a moment, I understood why people would spend years learning bird calls and walk for miles without a guarantee of seeing anything more than a cardinal. Laying eyes on something elusive, something that not everyone can see or even knows exists, is sensational.

This thrill is something that Barnett and Bedell chase.

Bedell has traveled to Costa Rica, Central America, and India to birdwatch and hopes to one day visit Ecuador and Colombia. Several years ago, Barnett spent an entire winter trying to see a snowy owl. He hiked five miles on Chincoteague Island. He made three trips to West Point, Virginia, where the bird was rumored to be perched on the end of a dock, once on Christmas Eve. And on New Year’s Day, a friend of Barnett’s suggested they go one more time.

“And there it was,” Barnett said. “It was just sitting right there on the dock. And you know, it’s, I mean, it’s just totally beautiful. An impressive animal. And to finally see it was amazing.”