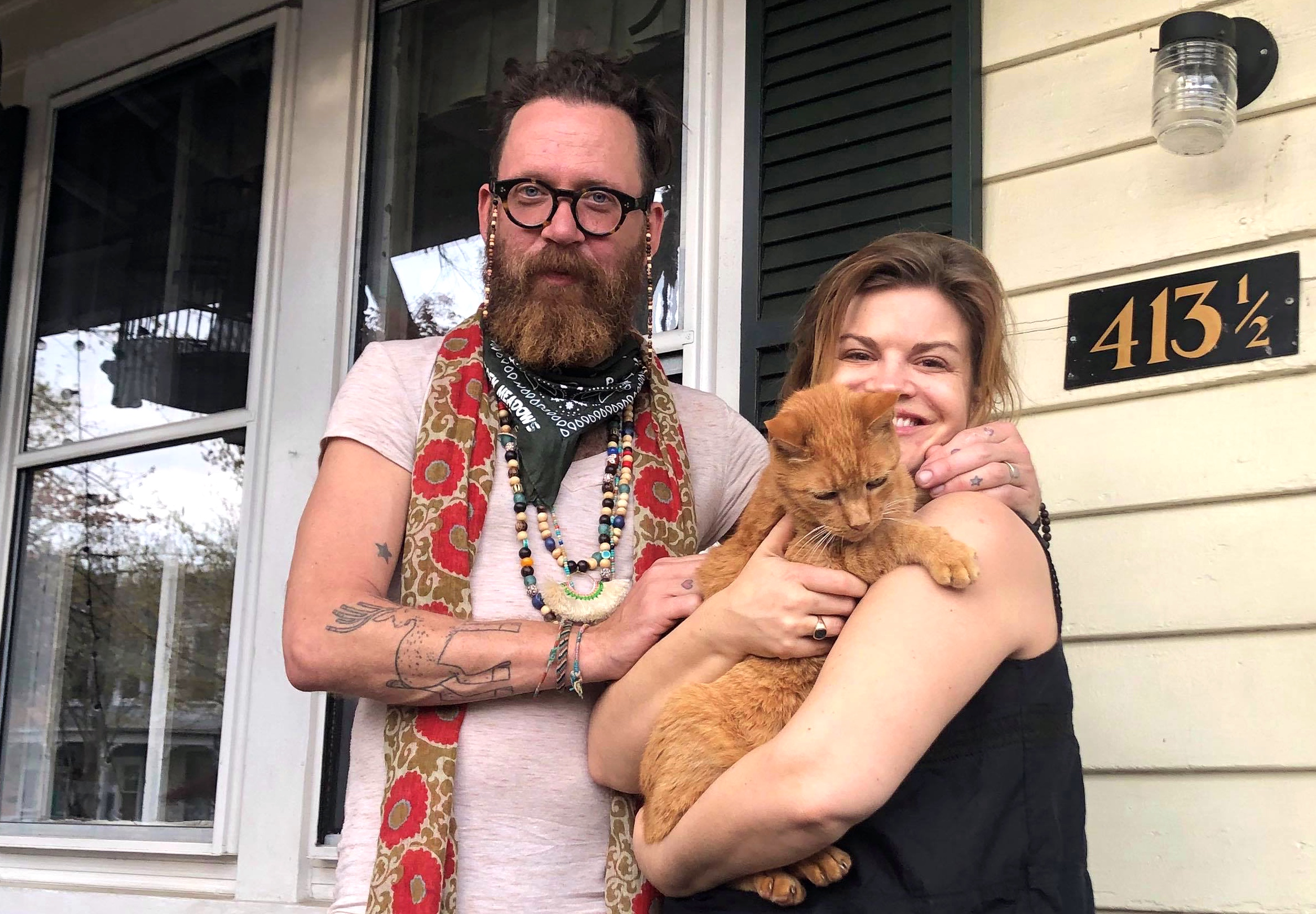 Chris Milk and Jenny Beth Friar with their beloved family cat, one of many I met in on my walks through Oregon Hill. (Photo by Brier Clough)

Every evening, Jenny Beth Friar and Chris Milk, who live on a leafy side street on Oregon Hill, gather their two young kids and go for a walk. Following a well-worn path, they climb down a short flight of railroad tie stairs to the banks of the James River. There they watch the sunset together and wish the rushing water well. “Goodnight, James,” they say, and head back up the hill to bed.

When I first met Jenny Beth, she was potting a plant she held in her gloved hands, with her hair in a loose ponytail, surrounded by scarlet tulips that filled her small front yard garden with bursting color. Chris, a long-haired, middle-aged man wearing beads and scarves around his neck, sat quietly on a simple red bench on the porch while he watched his neighbors and friends pass by on the burnt orange sidewalks of Oregon Hill, the neighborhood they love.

Perched on a bluff overlooking the river, Oregon Hill historic district was the site of a plantation during colonial times. It was developed in the mid-1800’s to house the thousands of working-class Irish, German, and Italian immigrants who worked at factories along the banks of the James River, including Tredegar Iron Works and the Albemarle Paper Company. After the Civil War, the community remained predominantly white, although some of the freed black population in Richmond worked for these companies and lived in Oregon Hill.

Today, this neighborhood of blue-collar workers living in affordable houses is rapidly becoming something else. Its scenic views of the river and quick access to popular Belle Isle make Oregon Hill prime real estate for developers, who buy large plots of land and demolish older homes to build new and far more expensive residences. 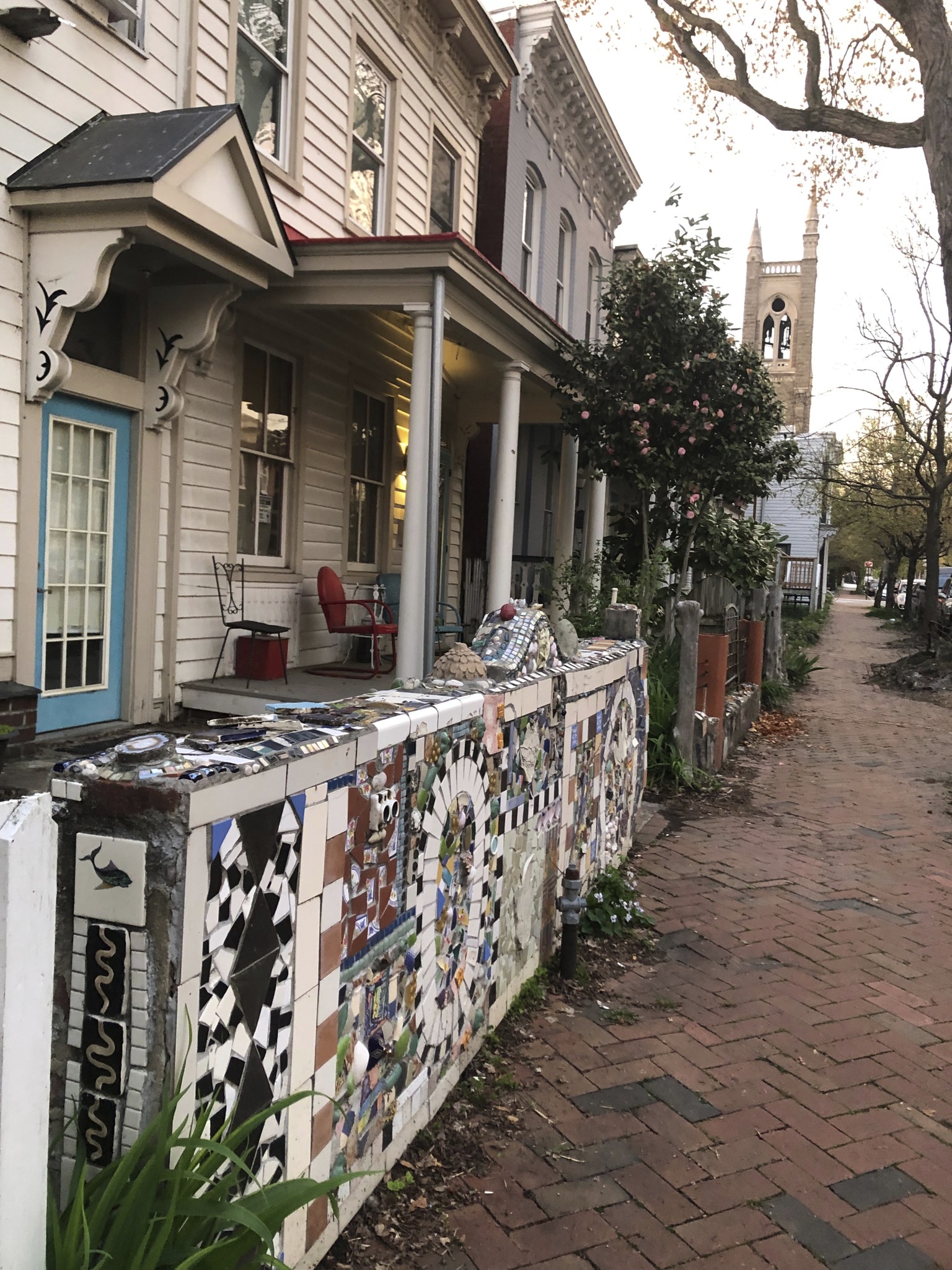 Near St. Andrew’s Episcopal Church, an ornately mosaicked wall bordering the sidewalk is a reflection of the unique Oregon Hill neighborhood. (Photo by Brier Clough)

Jenny Beth Friar and Chris Milk have lived in Oregon Hill for 12 and 20-something years respectively. They both have seen this neighborhood grow and morph into what it is today.

“I would even say this neighborhood is why I stayed in America,” Jenny Beth said, wiping traces of dirt and sweat from her forehead. The river drew her in, but the community—compassionate people willing to help their neighbors—is why she stayed. She sees it as the “best of both worlds” for raising their young children. They spend their weekends at Belle Isle, enjoying the presence and power of the river and its natural surroundings. “We’re very Oregon Hill,” she says.

Chris works as an art teacher at St. Andrew’s Elementary School, which their daughter attends. They try to support their lives with the resources their small community has to offer.

“Oregon Hill is very much a neighborhood in transition,” Jenny Beth said, referring to the influx of VCU students into the area and new, upscale developments such as the Overlook Apartments. The couple described mixed feelings seeing the neighborhood change.

“We all share things, but many of the college students don’t have the same respect for their community as the rest of us,” said Jenny Beth. “They don’t see anything wrong with leaving beer cans and old mattresses in the alleyways between the houses.” Not all the kids are like that, she said, noting that a few of them are active in the neighborhood’s Facebook group.

Chris remembers that the first wave of change he experienced in the neighborhood was in the 1990s, when VCU came close to buying up Oregon Hill and turning it into student housing and campus buildings. The plan wasn’t successful, but the neighborhood was “traumatized,” according to Jenny Beth. There is a lingering anger towards VCU, and some longtime residents still have negative feelings towards students moving into the area.

When Jenny Beth joined the community she noted there were quite a few empty lots scattered along the streets with no houses left behind, but that this changed when developers moved into the area and started buying up everything in sight. They filled the empty lots with new, expensive homes and welcomed newcomers. Next came rising property taxes and profound changes in the Oregon Hill community.

“Twenty-year locals and blue-collar families who’d been here for generations moved out,” says Chris. He estimates the student population now ranges between 50 and 70 percent of the residents in Oregon Hill—a far cry from what it was when he moved in to his first house, which was demolished a few years ago to make way for the Overlook Apartments.

Where once stood distinctive, Italianate houses dating from the early 20th century, there are now rows of cookie cutter apartments with signs declaring Private Property.