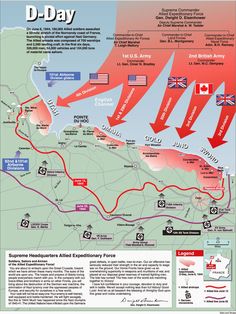 D-Day, one of the most important and influential events of the 20th Century, is portrayed through various American media outlets over the centuries that show the war more through the allied perspective as opposed to the axis. The invasion took place on June 6, 1944, and is a crucial moment in both American and World history. The assault allowed the allies to gain a foothold on continental Europe, and gave England a much-needed break from the German bombing runs that had devastated London. To this day, the invasion is the largest amphibious assault in history, consisting of 160,000 allied soldiers, 700 warships, and 2,500 landing crafts spread over 5 beaches in Northern France. The Western most beaches (Utah and Omaha) were assaulted by the Americans, while the Eastern beaches were assaulted by English and Canadian forces. In addition, many companies of allied paratroopers were flown in behind enemy lines, in an effort to take some of the fire off of the beaches. In my opinion, this was a maneuver by Winston Churchill in an effort to not repeat his disastrous invasion of Gallipoli during World War One. As is common knowledge, the invasion was a success with the allies taking all 5 beachheads and establishing a front against Germany.

The infographic I selected is very clear by our standards of judging maps. Not only does it incorporate visuals that paint a picture of the how and where the invasion took place, but it also includes lots of text that allows the map to dive into the specifics of the assault. It begins by giving a brief overview of what D-Day is, and the numbers involved in the invasion. It also includes which beaches were attacked by which nations, and who was leading the allied assaults on the beachheads. This shows the level of detail involved in the process, while making it abundantly clear where the allies were targeting. On the other side of the battle, the infographic shows the movement of the Southern German divisions after the invasion began. Since the target of the invasion was unknown to the Germans beforehand, they had to maneuver reinforcements to France as quickly as possible after the armada was spotted on the horizon. In addition, the map includes many smaller details that lead to it being my choice for map of the week. In the bottom left hand corner, the letter that General Dwight D. Eisenhower sent to his soldiers before they left for the invasion is shown. Before seeing this infographic, I was unaware that such a letter even existed, and being the world war 2 enthusiast I am, was very excited to learn something I didn’t already know about one of the most important events in world history. The infographic also includes the location of allied airdrops behind enemy lines: an inclusion that speaks to the World War Two junkies who will likely be reading this map. This shows the level of detail and amount of research that went into making the map.

While the infographic is well put together and researched, it doesn’t come without it’s drawbacks. Coming from a website regarding D-Day infographics, a battle which the allies won, the map is clearly from an allied perspective, with the majority of the map being covered with the allied invasion targets. Also, while the map does show the German troop movements, it doesn’t show how large their forces were or who was leading them as it does for the allies. Plus, the initial German defensive positions are completely left out, and the progression of the advancement into France is only shown from the allied perspective. While I wouldn’t go as far as to claim that this map is an attempt at propaganda, it’s clearly biased towards the allies. The map paints the invasion in a light that neglects the mass devastation felt by both sides on June 6th, 1944. Plus, the use of color also shows that the cartographers favored the allies. This is because the allied invaders are highlighted by a bright red that pops off the map. On the other hand, the Germans are barely shown at all, and are simply given small gray arrows showing their movements.

This infographic is an effective way of portraying D-Day. While it doesn’t accomplish everything I would look for in such a map, it does hit on several key things. First, it makes it clear which beaches the allies were targeting, and begins to show how they went about gaining a foothold in Northern France. It also shows the allied advance by giving dates of the allied location after the initial landings. The map also includes many roads and highways that connect Normandy to the rest of France and were likely used in the allied expansion into Europe. Overall, this infographic accomplishes what it needs to in an applicable and successful way.

The atlas I have selected to add to our curation is a collection of maps of America during the Revolutionary War. In order to understand America’s current foreign policy, it is necessary to understand the nations past. With this Atlas, it is easy to see how our great nation gained it’s independence, and what it’s initial relations with world powers were.