Infographic: Is Your State’s Highest-Paid Employee a Coach? (Probably) 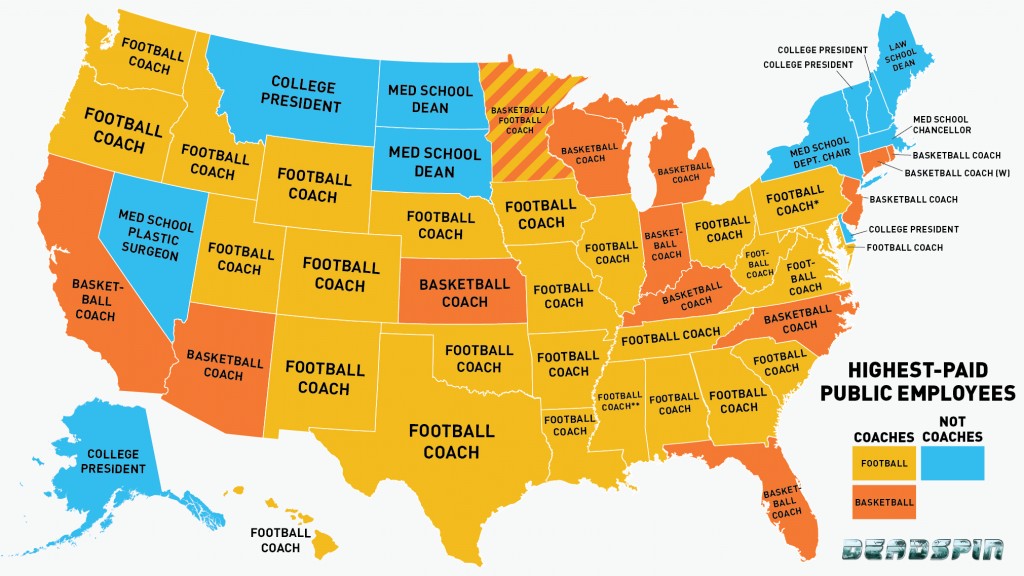 As you sit here, about to read this blog, a football coach is probably the highest paid public employee in your state. Or maybe it’s your basketball coach. Those are the big takeaways from Deadspin’s “Highest-Paid Public Employees” Map. Well that and 10 states that don’t care about sports primarily are probably paying a college president or dean the most. Either way, this maps speaks volumes to the priorities in America’s society.

This map makes the argument that majority of the American society places football or basketball as a top priority because they are willing to support these entities financially. At the same time the map would have viewers believe that only a small sliver of the public do not place sport as its top priority.In a society where sports like football and basketball are becoming increasingly popular, is it possible to think that these trends won’t continue?

I have to say that at first glance, this map gives me the impression that football and basketball rule the world. With 40 out of 50 states paying the coaches of football and basketball teams the most in the state, the questions about priorities can only become more prevalent. Now before you complain to your local politician, you should understand that most of these coaches’ salaries come from revenue earned from the teams. Some of the reported salary used for this map is comprised of “additional compensation” and this is made up of media appearances, apparel contracts, and fundraising. Before you rest easy, you should also know that only a small percentage of college football teams actually make a profit, and an even smaller percentage of basketball teams earn a profit (Dosh). Also, if the outside sources are not able to compensate their share of the coaches’ salary, the universities are responsible for the remainder.

Personally, this is not a shock to me as coaches have been getting outrageous salaries for what seems like an eternity. Football coaches have been selling to university boards the impact that football has on other points of interest for universities (such as admissions or recognition in general). Coaches have an argument for their salary, but what about the players. A map like this brings another controversial subject into question: Should college athletes be paid? Ever since the NCAA coined the term “student-athlete” colleges had a shield behind which they could hide and reap all of the financial benefits. These players are the attraction as I am certain that millions of people are not paying to see two coaches battle. It is about the players and the product on the field. I’m not saying that players should also be on salary because that could lead to an even more ridiculous map but a stipend or some type of compensation for their performance some more than justifiable. A map like this makes the argument of paying student-athletes and coaches at colleges much easier to discuss because of its simplicity. There is not a ton of figures or statistics to deter audiences from questioning why America prioritizes sports to this extent.

Reuben Fischer-Baum could have easily represented the data he collected using a table and accompanying it with a bar graph. Typically Fischer-Baum is driven to offer visualizations that force audiences to question a serious side of American sports. There is another Deadspin he published showing how menial the $765 million the NFL paid to former players in a concussion lawsuit. That was a bar graph that showed the disparity between the settlement payment and the revenue the NFL will earn over the payment period ($180 billion in revenue compared to $765 million). The payment comes out to be less than 1% of the revenue. Here, the power Fischer-Baum gains from using the flexible map is that he can show the distribution of preferences across the country.

Additionally, because this map was circulated all over television and copied onto various blogs, the message of questioning priorities was spread for all to see. The ease of circulation and discussion makes this map even more powerful. All kinds of audiences, because this caters to diverse demographics through its inclusive and inviting nature can debate over the priorities of America societies. This map could potentially be credited for the revolutionized American priorities because it caused many people to question society’s blind hegemonic relationship with sports. The nature of the map includes the typographical choices that were made (color, font, etc.).

The amount of yellow and orange that immediately hits the audience strikes as someone trying to send a bold message. Margaret Rhodes of Fast Company wrote in a review of the map, “In some ways, the color pattern of the map also parallels a red and blue electoral map.” By having this map paralleled, to an electoral map, there’s an undercurrent of persuasion, change of thought, and coercion. I agree with Rhodes as the more liberal states appear to have college officials as their highest paid officials, while the more conservative states have football coaches as their highest paid officials. This can open a dialogue about regional preferences and politics but that is for another blog. Fischer-Baum makes a point of Texas, a state that paid its football coach at the time Mack Brown $5 million. The team went 8-5, which by college football standards is quite poor. However, the team garnered over $100 million of revenue for the University of Texas. This indicates as Fischer-Baum put it, “You don’t have to pay someone $5 million to earn football revenue in Texas.”

Another aesthetic element to the map is, the use of large text in this map is important because it removes the barriers to understanding and increases the simplicity of the map. Immediately, as you look at this map the large text of Football Coach and Basketball Coach are somewhat overwhelming. It makes you question the American society and the preferences of the society. After I looked the map, it took some time to remember that there are other things of importance to prioritize in America. At the same time the large text helps Fischer-Baum achieve one of his central goals, forcing audiences to question serious issues occurring in our sports and society. Because there is really just the large, overwhelming text and contrasting colors, audiences can debate and discuss why American priorities are the way they are. Intuitively, if we value something, we will pay for it. Here the message is we value football and basketball more than education or government or anything else for that matter. Fischer-Baum’s map provokes a few important questions: Does it make sense that these sport coaches are the highest paid employees in 40 of 50 states because they can help bring in millions from devotes fans? Or is it a terrible budget plan leading to the demise of college sport? Right now, I do not have the answers to these questions. I do know this, the preferences of our democratic land are reduced by this map to sports and not sports. And sports reign supreme.

2 Responses to Infographic: Is Your State’s Highest-Paid Employee a Coach? (Probably)