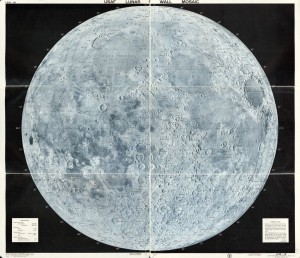 The Aeronautical Chart and Information Center’s map, “The Lunar Wall Mosaic”, created in 1962, depicts the moon’s surface, which consists of labeled craters and mountains[i]. The map’s depiction of the moon is sincere; however, the moon’s surface is not a remarkably intriguing territory. After a few minutes of examination, the map will most likely lose its audience’s attention. As a result, the important component of this map is its creation not its presentation. Lunar mapping enabled humans to visit and study the moon, as a map should, but the actual act of mapping the moon carried substantial political connotations.

Lunar mapping began in the early 1600’s and continued to develop throughout history. In the early 1600’s, William Gilbert created the first known map of the moon using naked-eye observations[ii]. The mapping of the moon became more detailed after scientists invented and improved telescopes. Lunar mapping reached its “hay-day” during the 1950’s and 60’s when placing a person on the moon became a possibility. However, after the United States successfully landed humans on the moon with the Apollo 11 mission, lunar interest faded rapidly and subsequent lunar investigation dwindled dramatically.

Mapping the moon was essential for a reason astronomer Zdenek Kopal captures particularly well in his statement “before travelers are able to visit the moon, it needs to be mapped”, however, mapping the moon was not a simple process[iii]. For astronauts to land on the moon, they needed to know exact details of the surface such as its slope and composition. Early astronomers used craters and telescopes to label the moon, establish longitude and latitude and estimate elevation, and detailed photographs later enabled more precise marking. Because the moon’s surface does not experience erosion similar to that on Earth, cartographers used novel techniques such as airbrushing to create lunar maps.

The two authorities that needed lunar maps the most during the 1950’s and 60’s were the United States and the Soviet Union. These two superpowers engaged in a “space race” in which they competed to explore space. As a result, the ability to map the moon carried political connotations. Mapping the moon demonstrated the ability of the two authorities to organize their resources and power. Because the United States and the Soviet Union were engaged in the Cold War, lunar mapping became a form of psychological warfare. As the United States mapped the moon, or vice versa, the citizens of the opposing power may have worried about being technologically inferior. Those citizens may have had thoughts such as “why are we not mapping the moon and sending more satellites into space” or “is our enemy gaining greater control over the final frontier”.

In addition to political implications, lunar mapping had military connotations. If an authority mapped the moon, that may have meant they were able to map the rest of the world. Therefore, if the United States managed to map the moon, was it able to map Soviet Union? Furthermore, mapping the moon revealed supplies of resources available on the moon’s surface. If the United States located these resources, the Soviet Union might have worried that the United States would have greater access to resources if there were ever a global shortage. “Lunar Wall Mosaic” highlights the important development of lunar mapping, which enabled astronauts to land on the moon and had significant political and military connotations during the Cold War.