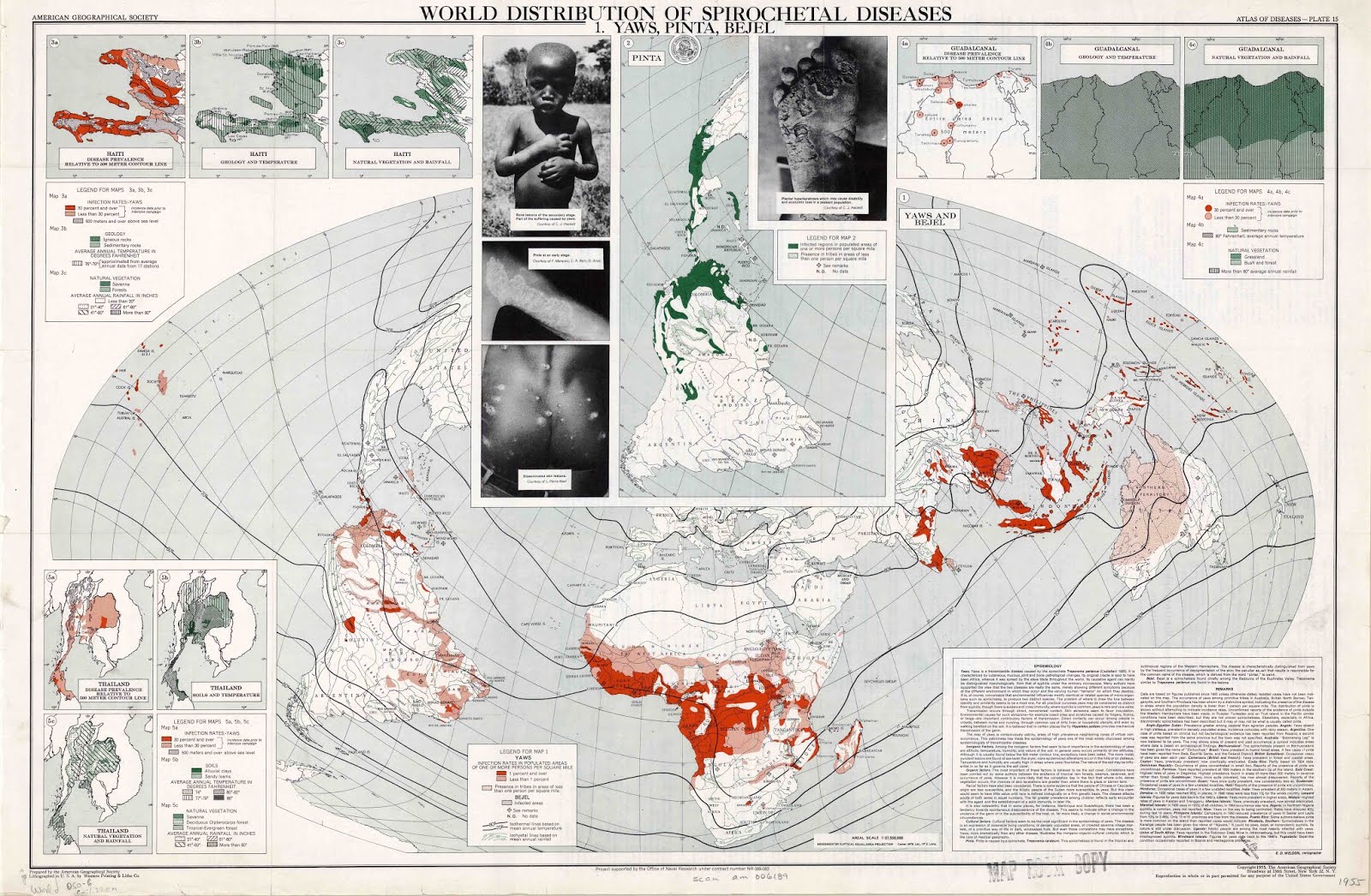 Boils, blisters, and bruises cover the southern hemisphere and make it the foreign and scary “Third World”. However, is this true or is this map trying to project certain ideals and interests on its audience?

The Atlas of World Disease was created in 1950 by Dr. Jacques May after the end  of World War II and during the Cold War. In this time period, Africa was in the process of rapid decolonization and the United States feared whether these new “Third World” countries would become democratic or communist. The creation of this atlas was funded by a three-headed beast consisting of the American Geographical Society, the United States Armed Forces, and various pharmaceutical corporations (Barney 2). It can be assumed that each of these groups had specific ideals and interests that they wanted to get across in this atlas so that it could be used as a piece of propaganda. One of the more interesting maps within the Atlas of World Diseases is the “World Distribution of Spirochetal Diseases” which depicts the prevalence of the diseases yaws, pinta, and bejel. This map lived a very active rhetorical life, making its way into the Council on Foreign Relations, boardroom meetings at corporations like Pfizer, congressional reports, and military advisor’s hands in areas such as Vietnam (Barney 2).  Although the uses of the map may have changed, the projection always stayed constant.

Following the projection of the map, one of the first things that a reader is drawn to is the set of pictures that are used to block off the Northern Hemisphere. These pictures serve a dual purpose. Not only are these pictures able to cover the Northern Hemisphere, making it appear clean and impervious to disease, but they also increase both the credibility and emotion of the map. By showing the deformities and the damages caused by these diseases, the pictures enhance the reader’s fear of these diseases as well as allow the reader to believe more in the scientific and factual nature of this map.  By causing the reader to both fear and believe the ideals that are radiating from this map, the map is able to become more powerful and influential in its true meaning.

Once the reader moves on from the pictures in the map, he/she is immediately drawn towards the deep red color that seems to have infected the “Third World”. However, if the reader looks closely, they will see that the deep red color represent only 1% or more of the population having the disease, a relatively small scale. As a result of this, the question arises of why is the color red used and why would the map maker want there to be as much deep red as possible in the map?

This question could have many different answers, but the most likely one relates to how this is a Cold War map. Dr. Jacques May most likely wanted to use red to represent communism and make the American public and all of the readers of this map fear the idea of communism seeping into these “Third World” countries and spreading like a disease. Dr. Timothy Barney reaffirmed this concept by stating that, “Color and density are, obviously, common tools for cartographers- and here the rhetorical choice of red and pink hues offers a sense of urgency, alarm, and infection” (Barney 25).  This map’s ability to create a fear of communism in the “Third World” attributes to how this map could be used as propaganda.

While the map of the “World Distribution of Spirochetal Diseases” appears at first glance to be based on the factual mapping of disease in “Third World” countries, this is not the case.  The scientific appearing map is actually a Cold War map that is used to divide the Northern and Southern Hemispheres for a specific reason. The main purpose is to impart a fear of the beginning and spreading of the disease we call communism in the impoverished “Third World”.